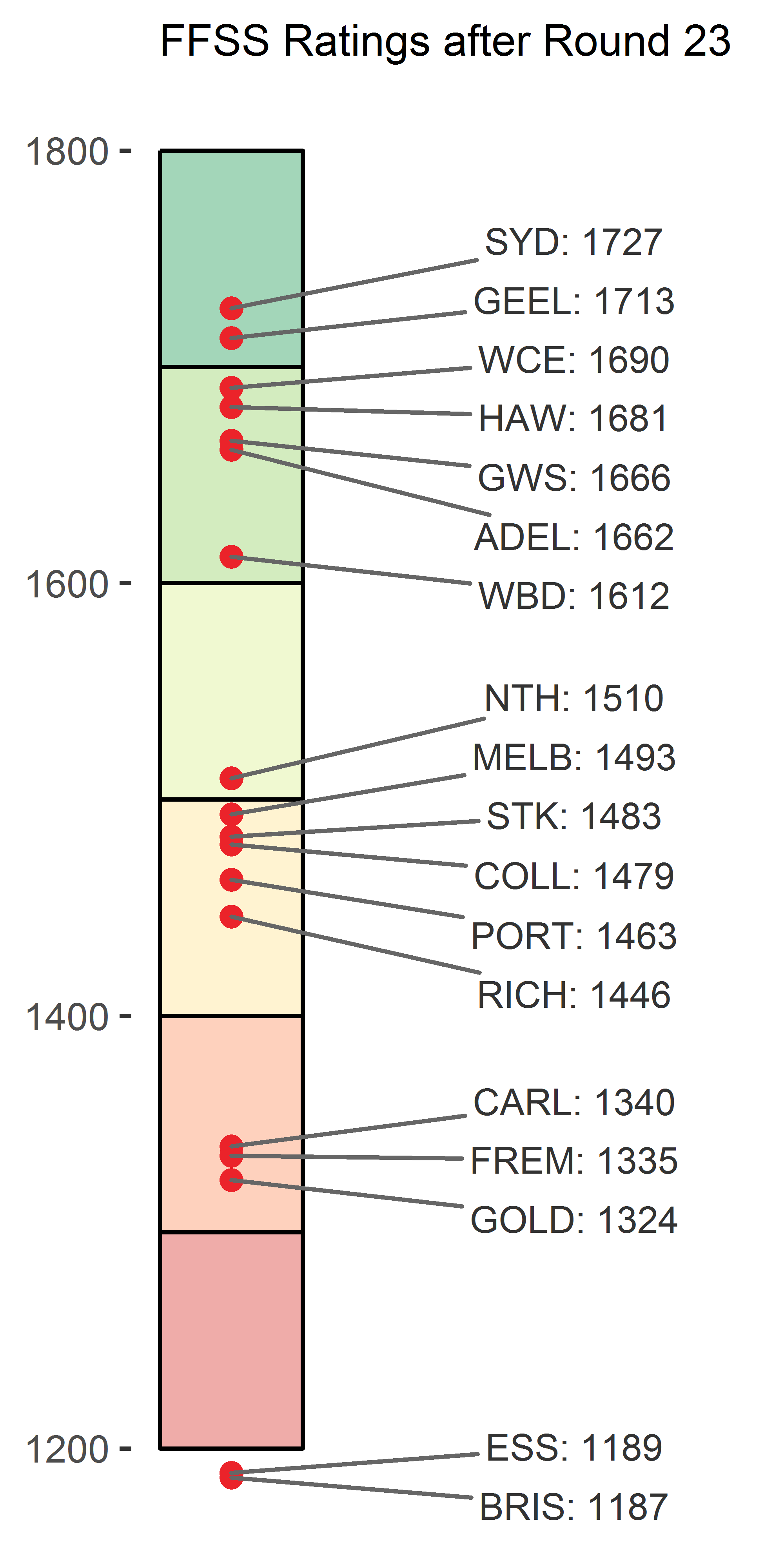 Posted in Game Analysis, and Ratings A couple of big games have shaken up the 8 completely after the last round of the Home & Away season. Not only does the ladder reflect this change of fortunes, but the FFSS team ratings do too. GWS have reached their highest rating in their history and Adelaide are not rated one of the 4 best sides for the first time since round 11.

Friday night saw a huge 48 FFSS point re-evaluation of both Adelaide and West Coast after the Eagles demolished the Crows at Adelaide Oval. The Weagle’s Web stopped the Adelaide run expertly and kept them to very few of their usual “out-the-back into the goalsquare” chances.

West Coast join the Cats as the only teams to keep Adelaide to such a paltry shot output. #AFLCrowsEagles pic.twitter.com/KYMTGo7QpY

GWS did a similar number on North, while the Cats and the Swans both beat their lesser fancied opponents at home, with style.

Hawthorn came within a couple of minutes of losing their “second chance” in the finals, being saved by a long, accurate kick by Jack Fitzpatrick in his first game in Hawks colours.

Jack Fitzpatrick's goal to send @HawthornFC into top 4 had only a 38% chance if kicked at the AFL avg. #AFLHawksPies pic.twitter.com/8ak17idAaI

All of that means that we now have a pretty clear top-6 sides, who could legitimately all beat one another on the day. The way the finals are set up, we have to favour the top-4, but West Coast and Adelaide still both have the potential to feature in October.

One rung down we have an injury ravaged Western Bulldogs who lost their “dead rubber” in Perth. They have still shown plenty of class this season and can be dangerous on their day, but it will surely be long odds for the Dogs in this state.

Next down we have a bunch of 6 clubs that just so happen to be fronted by North (who despite being in it, don’t really look like a finals side). These sides are all in very different stages of their development but will all fancy their chances at competing for the top-8 next season.

We next jump down to a group containing the incredibly disappointing Fremantle, the unlucky but ultimately lacking Gold Coast and the surprisingly not awful Carlton. These sides will all be confident an improvement is on the cards next year.

Finally we have the battle for the spoon. Despite winning (losing?) the actual wooden spoon by a percentage margin smaller than anything we’ve seen, FFSS actually rates Essendon slightly higher than Brisbane. Both have ultimately been very poor this year. Bombers fans will likely be happy with their performances and hopeful for a BIG bounce next year. Brisbane, well they need some sorting out. They’re quite possibly the only side that won’t have realistic hopes of finals football next season.