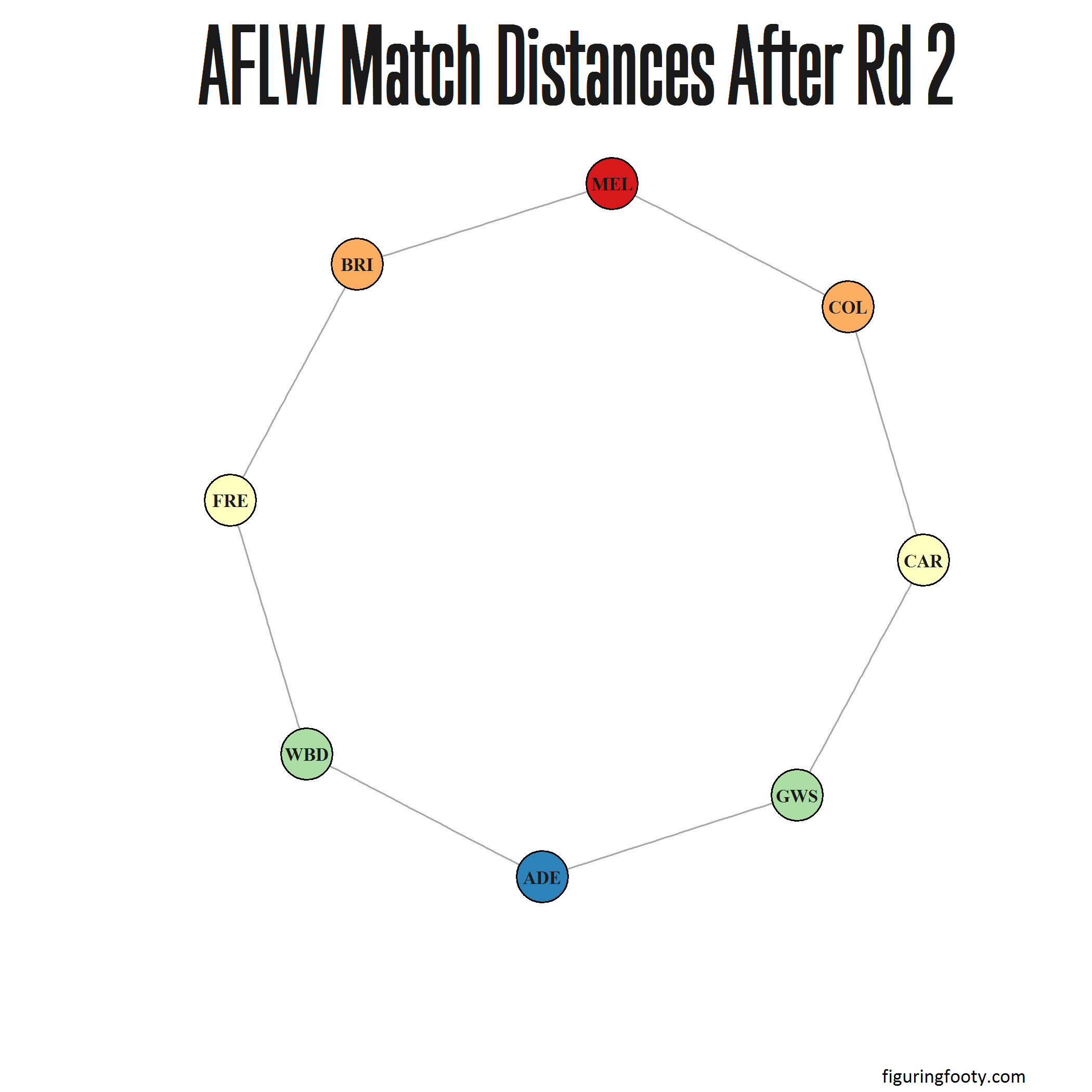 How Soon Until We Know the Best AFLW Team? Network Visualisations of the 2017 AFLW Fixture

Posted in AFLW, and Analytics Landscape

I’ve been keenly following the AFL Women’s league over the last couple of weeks and am already unashamedly at the stage where I plan my weekend around when my team is playing. It’s great to have footy back!

However, like most people, I had very little idea of what to expect before the season started. What would the quality be like? Would crowds get out to the local ovals? Who would be the best team? Some smart footy thinkers tried to use the recent performances of draftees and bookie odds to get an idea of the quality of the eight teams, but it seems like most punters were just blindly lobbing darts at the dartboard and backing in whoever.

As the season progresses we can start to get a better sense of which sides are good and which are still trying to get things together. While a look at the competition ladder might be the easiest way to do this, we run into the same problem as we do with the men’s game, every team has faced different opposition. How can we compare Adelaide, who have won 2 from 2 against GWS and the Bulldogs, and Brisbane, who have won 2 from 2 against Melbourne and Fremantle? It’s tricky. But these sides aren’t as far removed as some others right now. By looking at the result of the Bulldogs v Fremantle game we can reason just a little bit more about the quality of the Crows and the Lions.

To measure how “comparable” the teams are after each round of the season I’m going to use some basic Network Visualisation. After one week, there is only so much we can say. We’ve seen each team play once and against only one opponent. How much of a win was down to your team being good and how much was down to the opposition being rubbish is very hard to say. If we wanted to compare two teams that didn’t play, we wouldn’t really know where to start outside of a gut feeling of how they “looked”. After this round we can start to compare most teams either directly from results or from results in matches they played against a common opponent. The one exception to this rule is Adelaide and Brisbane. Even after three weeks, the best direct comparison we have between these sides is by looking at how the Crows fared against GWS and Carlton and how the Lions fared against Fremantle and Collingwood and looking at how these teams went when they played each other. Obviously still no direct comparisons between three teams, but after round four we should be able to get a pretty good sense of who’s tracking where based on performances between common opponents. Rounds five and six tick off a couple more match-ups for each team. Now each team has only one more side they’ve yet to face, in Adelaide’s case, that’s Collingwood.

After round seven every side has played eachother, and the two most successful are off to the Grand Final. While we can be fairly sure that these are the two “best performing” sides over the seven weeks, one further thing that complicates direct assessments of quality is the fact that these sides don’t face eachother at the same grounds.1 It’s very likely that Fremantle at home is a much tougher prospect than Fremantle in Melbourne, but just how much tougher is hard to say. Is home ground advantage the same as it is with the men or does the fact that these women are amateur and often working day jobs make interstate travel more tiring?