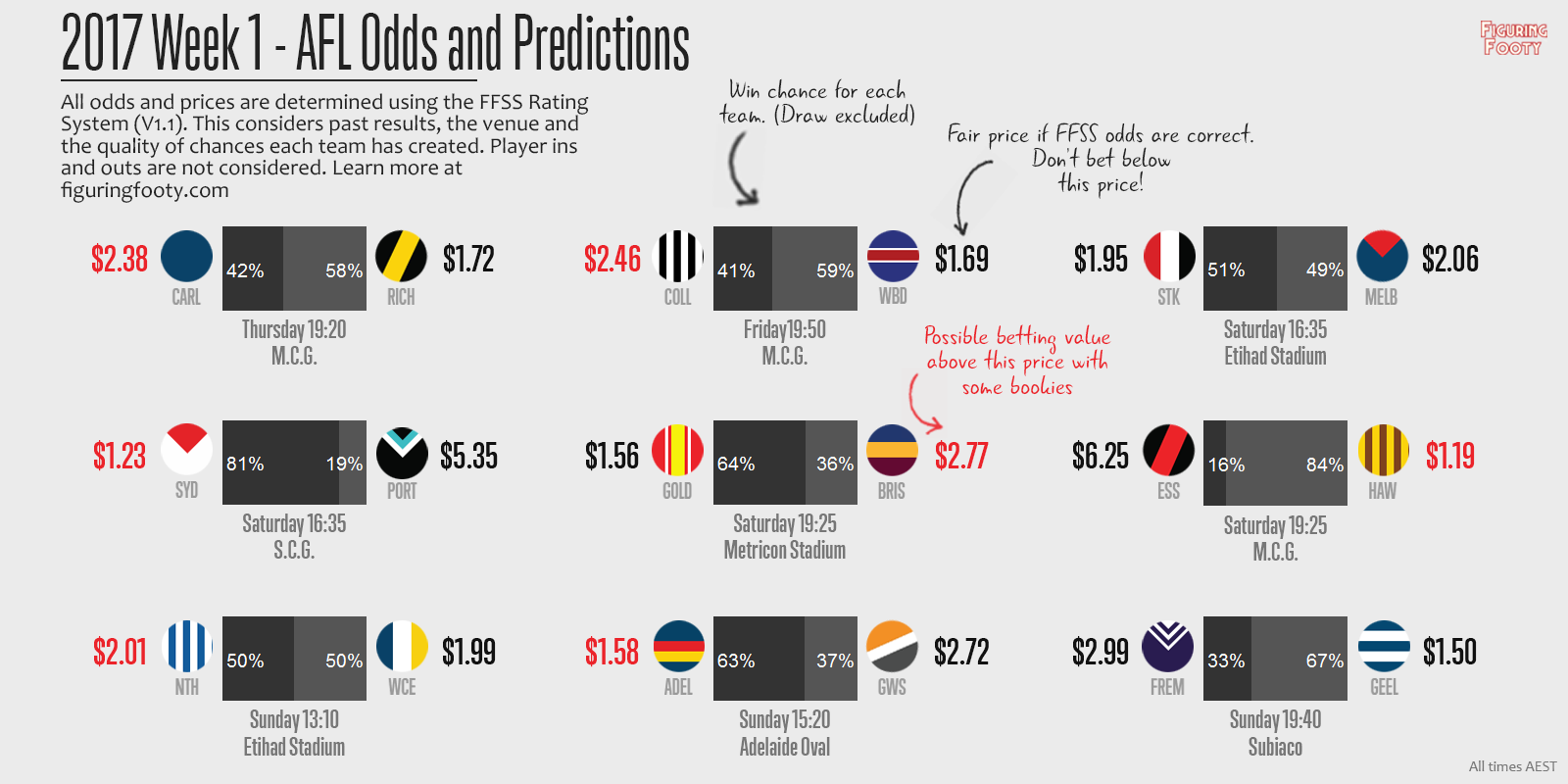 2017 promises to be one of the most exciting seasons of footy in recent memory. There are probably 16 clubs with legitimate aspirations of, come September, giving the finals a big shake up the way the Dogs did last year. But of course, only 8 spaces are there for the taking so we’re bound to have some very capable teams miss out this time round.

As well as the wider than normal field, we also have some big questions just begging to be answered. How does a year off footy effect a players’ career? Between the returning Essendon players, Cam McCarthy, Nat Fyfe, Jarryd Roughead, Jaeger O’Meara, and a slew of others, we’re gonna have some of the best data to answer this question we’ve ever had. Are the Bulldogs really the top side, or did they ride out their fortune last year? The first few rounds will give us a sense of how they back up. Have GWS perfected the art of list building? Are they going to be unstoppable or just merely fantastic? How angry is this going to make Eddie McGuire? 2017 is gonna be great.

I’ll be back again this year to hopefully answer some of these questions, however regular readers will notice the focus of the content on Figuring Footy is going to change a bit.

When I first started this blog in late 2015, my focus was on building a robust, accurate computer tipper using the Elo ratings framework. What I came up with was the FFSS model. Each and every week last season I wrote previews of the coming round through the eyes of the FFSS model. I tried to explain what the model was picking up on and what it was blind to, and I published the model’s predictions in the form of the image you see above/below in order to share the tips and compare them to the betting markets.

At this point of time there were, to my knowledge, two other “computer” tippers that openly shared their predictions. Since then, things have got a lot more crowded. PlusSixOne maintains a pretty slick Elo model, Matt at The Arc is doing all sorts of neat things with his model, and Analysis of AFL is even teaching punters how to build your own model, code and all. There’s a lot more talk about Elo and modelling in general and a lot more people are trying their hand at it. I think this is super, but it does make me think that my time can be better spent on other, more exciting things.

My tips and predictions can still be found, regularly updated on this page. And the FFSS model will be one of the predictors driving Max Barry’s fantastic new Squiggle page, which is definitely worth a bookmark. However, I probably won’t be writing about and explaining my predictions to quite the same extent this year as I did last. Instead, I want to focus on some deeper team, player and trend analysis as the season progresses, as well as hopefully introduce a few more visualisations and tools in a similar vein to last year’s Fresh Way to Think about Footy series.

That being said, we’re all here now, so I may as well go through the Round 1 tips and some of the big things to be mindful of if using FFSS to shape your own tipping. Things to bear in mind:

I hope to address these points with some new models and analysis throughout the year. Stay tuned.

I’ll still likely talk about tips from time to time, particularly on Twitter. So if that’s your sort of thing, give me a follow. Happy tipping.