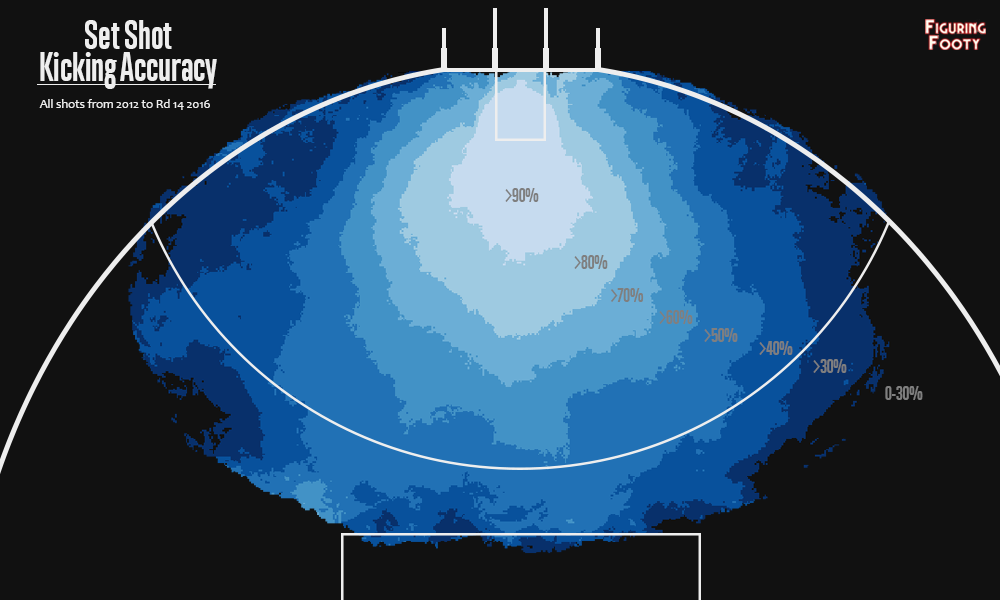 What this early article refers to as “ExpScore” is now usually referred to as”xScore”.

A key component of my FFSS ratings, which are used to calculate the winning chances of each team ahead of each match, is the concept of “Expected Score”. Expected Score, or to save precious character space, “ExpScore” is a basic concept, and one I’m surprised to not hear more about in footy coverage.1 It’s simply the score that a team would have kicked had they converted each of their Scoring Shots at the competition average based on the difficulty of each shot.

This is a way of valuing a team based on the amount of good chances that they create, opposed to just looking at how many goals they kick. I will show in another article that this is actually a much better way of differentiating good teams from bad then looking at final scorelines is. It turns out, that even the best teams tend to convert their scoring shots at roughly the competition average, what differs is how many, and what quality chances they give themselves.

Well, first off, after a Scoring Shot is recorded, we use two criteria to determine the quality of that shot and it’s contribution to ExpScore. Firstly we look at whether the shot was a Set-Shot or not, and secondly we look at where on the ground the shot was taken from.

Before explaining how ExpScore is calculated, we need to look at the historic accuracy for each type of shot. A Set-Shot is simply defined as any shot which was preceded directly by either a mark or free-kick, and in which “play-on” or “advantage” was not called. Note that neither time spent on the shot, nor whether there was a man on the mark is considered. You can see a map above of the empirical conversion rates for a set-shot from any spot in the forward half.

To create this map I have looked at every set-shot taken from the 2012 season until now, a total of 21,452 shots. For each spot in the forward half, I look at all shots taken within 5m of that spot and and calculate the percentage of those that were goals.2

This methodology creates some strange results around the boundary lines and at the edges of the players’ kicking range, about 55-60m out. These are areas where few, if any shots are ever taken from.

You can also see a odd little splotch about 60 out to the left of the goals. This is due to a smallish sample (20-25 shots) being skewed most likely by a few shots into an open square with nobody home. However you can see a slight preference to the left side of the ground from shots taken further out. This is probably due to the fact that right footers can hook their boot into the ball and shape it into the goals a bit easier from this side. There are more righties than lefties so we shouldn’t be surprised to see a bit of a preference to this side.3 Any shot not classified as a set-shot gets lumped in this category. In total, there are 21,883 of them.

As you can see, the accuracy rates for shots from open play are much lower than those from set-shots. A shot from 25m out on a slight angle is converted about 84% of the time if it’s taken as a set shot, compared to around 50% if it’s taken from open play.

Of course, it should be kept in mind that not all “Open-Play” shots are created equally. The differences in level of pressure on the goal-kicker can vary greatly. Strolling into an empty 50 and taking a drop-punt is theoretically a much easier kick than hooking around your body through heavy traffic. I haven’t found a way to be able to algorithmically distinguish between these shots, so for the time being I am lumping them all together.

To calculate the ExpScore for a shot we look at it’s type (set or open) and position and find the competition-wide average accuracy of all shots, up until that point in time, of the same type, from within 5m of the spot the shot was taken from (which corresponds exactly to the images above for a match in round 15).4 This probability is multiplied by 5 and then 1 is added to give us our expected score from that shot.

For example, a set-shot from the top of the goal-square5 has about a 99.5% chance of being a goal. The ExpScore of such a shot is then:

Or essentially 6 points. On the other hand, a shot from open-play, about 40m out, near the boundary might have closer to a 32% chance of being a goal. The ExpScore of this shot is:

Let’s have a quick look at the Western Bulldogs v Geelong game from a couple of weeks back. The score finished WBD (5.13) 43 to GEE (16.4) 100. A big win for the Cats, but seemingly pretty even in the amount of scoring shots each team created. The Bulldogs created 18 and the Cats 20. In fact, the Bulldogs created 2 more inside 50s over the course of the game, a stat which is often said to show who is on top.

However, when you look at where and what types of shots each team had you can see why the Cats won so easily. First lets have a look at the Dog’s output. The Bulldogs created very few chances in those “high percentage” areas. Their set-shots were taken mostly from the 40-60% areas and the fact the they converted only 4 out of 9 should not surprise us at all. On a different day they might have perhaps kicked another, but they certainly did not butcher any high-quality chances.

Similarly, their open-play scoring shots were all from weak areas and the fact that they converted only 1 out of 9, while also being a little under what we would expect on average, is nothing too unexpected. They didn’t manage to create a single scoring shot with anything greater than a 60% chance of being a goal. From 46 inside 50s this is very impotent.

When adding up all the expectations we get an ExpScore of 64. On an average day they would have kicked a score of 64 from their 18 chances. Certainly nothing to celebrate, but better than the 43 they kicked. Poor kicking on difficult shots let them down. The first thing that strikes us is the amount of high-quality shots from in and around the goal-square the Cats took. Unsurprisingly, they kicked all of these.

The next thing we notice, is how few misses they had. Outside of those run into the goal-square and a few set-shots in higher-quality areas, Geelong took 8 shots from 40-60% areas and converted 7 of these. If they had these shots again, it would be highly unlikely that they would kick this many. It’d be easy to say, “Well Geelong are a better team, and better teams kick better”, but anybody who has followed the Cats this year knows that is not true. They have been all over the shop in accuracy in front of the big sticks. Look at another game, from another week and it would be easy to make the argument that Geelong kick worse.

The truth is, they most likely kick at about comp average, and we expect to see some days where they are up and others when they are down. This is just how averages work. In this game they kicked better than their ExpScore of 86, but still deservedly won the game with all of those high-quality chances the Bulldogs failed to create.

It’s likely by now you’ve realised that a shot doesn’t have to end in a goal or a behind, it may well not register anything.

Unfortunately, data on shots that did not result in a score is hard to come by. The AFL does not make all the data it collects through Champion Data publicly available. A big shortcoming of ExpScore and these accuracy maps in general is that the data set only includes “Scoring” shots. That is, intended shots that go out of bounds or otherwise fail to trouble the scorers by falling short are not factored into these percentages, nor do they count as “chances” towards an ExpScore for an individual game.6

Factoring in these other “missed” shots, the true conversion rates are probably much lower than those shown in the picture above. Particularly on tougher shots.

Similarly, the ExpScore for a game is not a “true” ExpScore as it does not factor in point expectation from those shots that miss entirely. But by using the higher probabilities, these two cancel each-other out somewhat and ExpScore still remains useful.

I will write more on how we can effectively use ExpScore as the season goes on, as well as disecting individual games I find interesting using the ExpScore framework. However, as of now I hope you can see it’s potential.