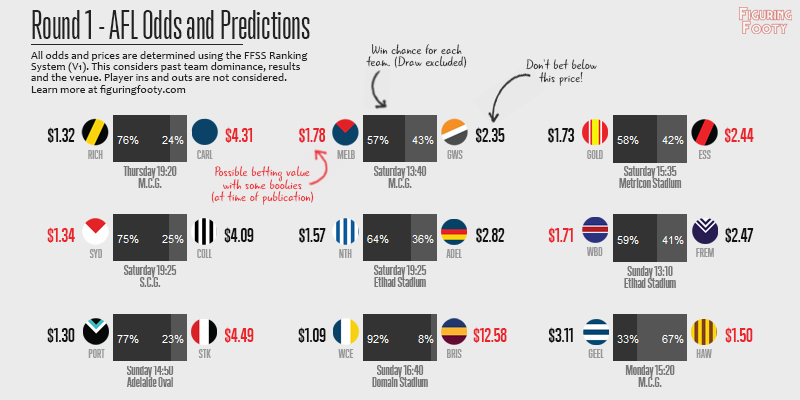 After almost 6 months of mindnumbingly football-free weekends, the 2016 season is set to get started this Thursday night at the MCG. Having recently unveiled my new team ranking model, FFSS, I now have a system by which to predict probabilities for upcoming matches.

NOTE: All betting amounts will be discussed as unit bets assuming you have 100 units to play with as your full bankroll. For example if you have $10000 that you’re willing to lose over the year if worst comes to worst, then 1 unit is $100. A higher unit bet shows more confidence in the models assessment and the value to be made. If you are interested in betting as a serious money building exercise, first I would question whether you really want to cope with the stress of the virtually guaranteed big losses you will experience week to week. If the answer to that is yes, then read as much as you can on Bankroll Management and the fractional Kelly Criterion. You are very likely betting too much to be sustainable.

Before I delve into any discussion about this week’s matches, I should first make clear exactly where these probabilities are coming from. The FFSS rating system can take the current ratings of any two teams as well as any venue in Australia and calculate the chances of either team winning a match played against eachother there. In testing, this model has performed admirably compared to other similar models, as well as “expert” tippers. However, FFSS is nothing without accurate ratings. Luckily, being a self-correcting Elo-based system, FFSS updates her ratings after each round, ensuring that she remains as accurate as possible as the season progresses. This just leaves setting the initial, Rd 1 ratings.

There are a number of ways we could infer initial ratings. We could look at the quality of each side’s playing list. This would involve giving each player a rating and somehow determining how well every single player plays within the context of that side’s other players. For example, 5 quality ruckmen aren’t going to improve a side as much as 1 good ruckmen and 4 good midfielders.

We could look at off-season team reports or pre-season form. However, as Carlton fans will no doubt tell you, NAB Cup form doesn’t always equate to regular season form. So what’s the best way to calculate initial ratings?

Well, at this early stage of her life, FFSS is a pretty dumb model. For simplicity she assumes that each team’s initial 2016 rating is simply their finishing 2015 rating, reverted to the mean by 40%. This makes the overriding assumption that teams that played much better than average team rating of 1500 last year come down to earth a little bit and teams that played below that average improve slightly. This assumption is grounded in both probability theory and in the AFL’s equalisation policies such as reverse draft picks.

This year’s initial ratings are found opposite. Possibly the most obvious thing that sticks out about these is Essendon’s rating as only the 4th worst team. This is in stark contrast to most of the doomsday predictions that have been posited in the media over the last few months regarding the Bomber’s hastily patched together side. Put simply, FFSS has no idea what the heck a WADA is.

What looks like one of the dullest games of the round on paper will actually provide us with some real quality information on where exactly these two teams are at. Interestingly, the bookies have GWS as the clear favourites while FFSS thinks it is in fact the Dees at home that hold the edge.

There are high hopes for GWS this season with the general consensus being that their young players are beginning to hit the peak age bracket and the glimpses of class that they showed early on last year can become a regular feature of their play. Hopes for Melbourne on the other hand, remain relatively grounded. While having a good pre-season, they are still the same Melbourne that hasn’t been able to put together consecutive wins together in years.

GWS dropped down the rating table last year after Shane Mumford got injured. Having him back certainly makes them a better side. However I think the two sides are probably closer than the public opinion dictates and considering the home ground advantage, a price of $2.30 probably offers value. For it to not offer value the Dees would have to have a true win probability of below 43%, much lower than the 57% that FFSS predicts. I think the truth lies somewhere between those two numbers.

Well well well, we don’t have to get far into the season to see the immediate shortcomings of the FFSS rating system. Not knowing that Essendon are missing over half their squad to suspension, FFSS actually considers the Bombers a better rated team then the Gold Coast (which it rates primarily on last year’s mostly Ablett free season). Only the modest Home Ground Advantage tips FFSS’s opinion in the Suns favour.

Odds over $5.50 are being offered on Essendon, which might in fact offer value. But that’s a BIG might, and as we haven’t really seen anything like this before, based mostly on a gut feeling. We should definitely hold off betting on Essendon for a few rounds while FFSS corrects her position to something a bit more realistic.

The Pies spiraled out of control in the latter half of last season to fall from a genuine top 4 chance to a below average team. FFSS does not rate them as lowly as some other rating systems as she knows how strong the teams they lost to and how close some of those losses were. However, she certainly does not seem to rate them as highly as Collingwood fans, or the general public do.

Being such a big club, Collingwood often have a lot of betting money thrown at them. This, in turn, brings their price in. To be fair, the Pies have picked up some names in Adam Treloar and James Aish but will be without Travis Varcoe. Meanwhile, Sydney will slot Lance Franklin back into a team who’s good rating was established under a predominately Buddy-free period. For me, Sydney at home deserve to be better than $1.66, or an implied 60% chance.

This is also a match-up that will give us our first idea at where exactly these teams are at. FFSS rates both of these teams in with the pack of 8 chasers behind Hawthorn and West Coast. Only Home Ground Advantage tips FFSS’s favour in the Bulldogs direction.

Being the reigning minor premiers, Fremantle opened up strong with a Bulldogs bet paying almost $2.50 a few weeks ago. Since then, there has been talk about Fremantle’s aging side, renewed hope among the small Bulldog fanbase and Harley Bennell ruled out of Round 1. This has got punters to question those wild odds and moved the needle way back in the Bulldogs direction so that they now go in as ever so slight favourites in most books. At $2.50 it’s a great bet, at $1.92, less so, but I am still backing FFSS and the Bulldogs in here with a conservative bet.

Another great chance to gather some early season indicators about the quality of two teams. This Easter Monday match-up should be a cracker. Reigning triple premiers and rightfully top ranked team Hawthorn will be without a number of key players (Roughead and Shiels to injury and Lake and Hale to retirement). Meanwhile Geelong have traded up some big name players in the off season as Scott Selwood, Lachie Henderson, Zac Smith and a little talked about fella known as Dangerfield will come in for the aging group of Steve Johnson, James Kelly and Matthew Stokes as the Cats bid to become premiership contenders once again.

FFSS of course does not know about this shake-up at all. She instead sees this as a game between the reigning premier and a middle-of-the-pack side played at the premier’s home ground, and hence favours Hawthorn accordingly. However, with Alistair Clarkson’s historically slow starts to the season and all the question marks over both sides, $1.65 for Hawthorn is just a bit too much of a risk for me. I still tip them to win however, but the value just isn’t there with an implied win probability of 61%.