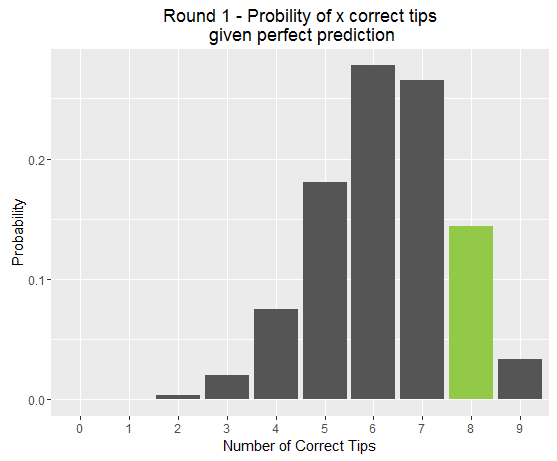 Tipping Results vs Expected Round Probabilities Why getting a perfect round of tipping is such a big ask, even for a computer.

My new computer predictor algorithm FFSS (Figuring Footy Scoring Shots) fared pretty admirably in her first week of tipping, nailing 8 out of 9 possible results. Only a bit of Dangerfield-inspired magic late on Monday afternoon prevented a perfect start to the season.

Anybody who has read this blog before will know that before the upcoming round I publish expected win probabilities for each match to be played. These probabilities are calculated by looking at the FFSS ratings of both teams and accounting for the venue. For example, I gave Sydney a 75% chance of beating Collingwood at home. They of course went on to thump them by 80 points. So then, if Sydney were so good, why didn’t the model rate them even higher and know ahead of time that they would dispatch Collingwood with ease?

Well, to put it simply, upsets happen. More specifically, a team with the FFSS rating of Sydney at home loses to a team with the FFSS rating of Collingwood about 1 in every 4 games. This just happens. It doesn’t (necessarily) mean that the pre-match prediction was wrong. Imagine you roll a dice. I bet you even money that the number you get is 5 or less. If you manage to roll a 6 you win my money, but that certainly doesn’t mean that you made a good bet.

A lot of people imagine that if you model a football match accurately enough you will be able to determine exactly who will win. As if we would be able to say Richmond will win on the weekend for sure. The real world is not like that, there are just too many variables that can affect a game. The bounce of the ball, an untimely gust of wind, Jack Riewoldt getting momentarily distracted by a pretty girl in the front row and reacting even a fraction of a second later to a kick inside 50 then he would have otherwise.

There are just too many variables to model, even for all the supercomputers in the world combined. Even if we could somehow break down every particle in the universe and use all of them to build a computer to model a match, we still couldn’t say with perfect certainty who would win and by how much. It’s just a quirk of nature. We can only model expected probabilities, not exact events.

Having said all that, keep in mind that FFSS is still a smart system. She takes on new information each week and continually revises her estimates for each team and the expected probabilities of each match so that they remain as accurate as possible.1

What is the chance of tipping a perfect round?

To tip high scores we can’t have upsets. However, we know they happen. We know we expected Collingwood to win 1 out of every 4 matches. How likely is it that we could really avoid all upsets in a given round? Well that of course depends on the expected probabilities of each match in that round. Are there many one-sided affairs?

Given the FFSS probabilities of last week’s matches, and assuming they were all completely accurate2, what would have been the probability of tipping a perfect round? What about 8/9? 7/9? This week’s result of 8/9 can be considered rather lucky. If we somehow replayed Round 1 over and over again without any team changing in any way, we would expect to tip 8 games or better less than 20% of the time.

You can see how unlikely it would have been to tip 9 from 9 this week. Before the start of the round, even with complete faith in FFSS’s ability, we still would have expected to have about a 3% chance of tipping a perfect round. This, in essence is what makes modelling so difficult, even with perfect information, odds are there is going to be an upset somewhere along the road.