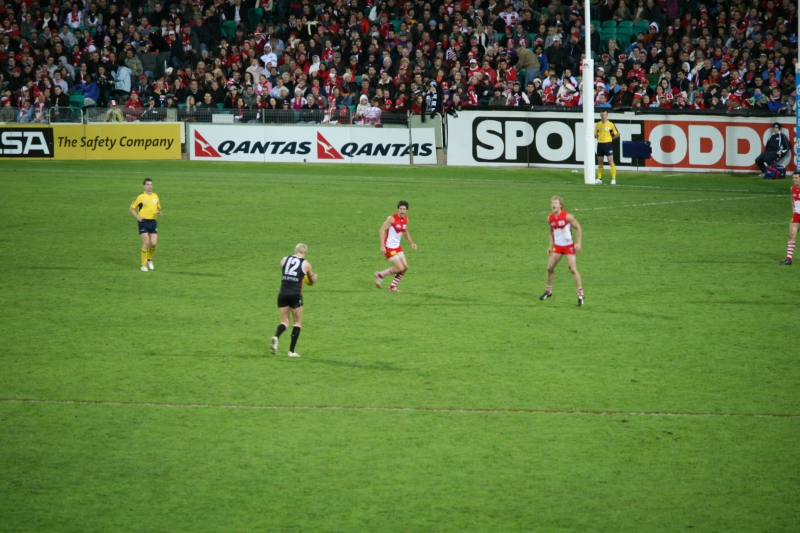 Are Good Teams Straighter-Shooters? Exploring the importance and consistency of Goal-Kicking Accuracy.

Goal-Kicking has long been touted as the single most important skill in Aussie Rules footy. Obviously, if you can’t kick a goal, you’re never going to win a game. This is why it is surprising that while goal-kicking accuracy has improved over the last 40 years, it has in no way matched the corresponding improvements in other important match skills as footy has become the professional, scientific game it is today.

While this is true (and certainly something for kicking coaches to think about), I’m less interested in the long-term historical shift in Goal-Kicking Accuracy (GKA) and much more interested in what we can learn about a modern day team in the AFL from how they kick in front of the sticks. Do better teams have a consistently higher GKA? Can we use the past GKA of teams to tip upcoming matches? Can it help us predict a premier?

How important is Goal Kicking Accuracy for winning a match?

I guess the best place to start is by looking at just how important kicking accurately is to winning a match. How often does the team with the higher GKA win?

I’ve collected data on the goal-kicking of both teams in every H/A match from 2003 up until the byes in Rd 11 of 2015 to see how often the team that kicks with greater accuracy actually wins the match. I’m going to be focusing mainly on a team’s Goal-Kicking Accuracy which I define as:

I’ve filtered out games where one team has less than 10 Scoring Shots as these are extreme anomalies (occurring roughly 2 or 3 times a season) and such low scores can easily distort our data. For example, in Rd 20, 2011 against Collingwood, Port Adelaide kicked 3 goals and no behinds after accounting for rushed behinds. This would give them a GKA of 100%, which is nonsensical because they obviously got thumped and even one miss would have lowered their GKA drastically.


So with all that considered. How often does the team with higher GKA end up winning the game?

Let’s also look at the average GKA of the winners and losers of each match compared to the overall league average.

Winners of matches are on average over 5% more accurate at goal-kicking than losers.

That might not seem that much but it’s actually quite incredible, considering we presume nothing about how many shots each team took or how dominant each was in general play. The reward of 6 pts rather than 1 pt is such a boon, that straight shooting really can mean the difference between winning and losing.

To really drive the point home, I’ve conducted a binary logistic regression on the twelve and half seasons of data to give an estimated probability of winning a match for varying levels of GKA. Don’t worry if you don’t understand the specifics, all you really need to recognise is that independent of the amount of shots they take and their opposition’s GKA, the better a team’s accuracy in a match, the higher their chances of winning that match become.

Okay. So now we know for certain what we expected. Kicking straight matters. But how can we use GKA to help us predict how future match-ups will turn out? Are some teams just consistently straighter shooters than others, in the same way that some teams are consistently dominant in other areas of the game? Do we expect the premiership favourite to kick better than the minnows?

Below is a scatterplot graph showing the Goal-Kicking Accuracy of every team in the competition for every match for the first 10 rounds of 2015, plotted against their accuracy in the following match. For example, in Round 6 against Collingwood, Geelong had a 71.4% GKA, next week in Round 7 they had a 57.9% GKA against Sydney.

If Goal-Kicking Accuracy one week was a good indication of how accurately we could expect a team to kick next week, this graph would be clustered in tight around a diagonal increasing line. What we actually get is just a mess. No distinguishable pattern at all. I will include the specific output at the end of this post for those who are interested, but you should be able to see with the naked eye that the line of best-fit is not a very good fit at all. There’s very little, if anything we can predict about the accuracy of a team by looking at how accurately they kicked the previous week.

Perhaps this is unsurprising, after all, opposition quality can differ drastically week to week. Maybe it’s easier to kick straight against an easy team that isn’t putting a lot of pressure on the ball. Maybe a star Full Forward is out due to suspension one week, so the teams’ overall accuracy might be a little lower. What is surprising however, is some of the recent findings by the fantastic Tony Corke at MatterOfStats. He found that the correlation between a team’s accuracy in the current game and their average accuracy in their previous 3 games, 6 games, 9 games and the whole season to date is also virtually non-existent.

Just because your team goes into a game having kicked deadly accurately over the last 9 weeks, recent data shows that you’re not really any more likely to kick straight than your opposition that has been all over the shop in recent weeks. How’s that for unintuitive? It just doesn’t feel like it should be right. Good luck trying to sell newspapers on that headline: “Next Weekend’s Kicking a Complete Coinflip!”.

Okay, so maybe there’s just too much variation week-to-week to actually get a good idea of the kicking skill differences between teams. How about if we compare a team’s average Goal-Kicking Accuracy for an entire season to the accuracy they achieve next season? After all, taking the whole season will smooth out most of those differences that arise due to opposition quality changing week-to-week. And the majority of the squads in the AFL do stay at least somewhat similar from one year to the next. Sure there might be some personnel changes, but the core of the team usually stays stable.

So, let’s look only at H&A fixtures and take season averages for every team in the competition between 2003 and 2014. (This time I’ve made the graph a little more interesting. Click on the team names to add/remove data and scroll over to see more detail)

Even looking season-on-season, the same story arises. There just doesn’t seem to be any repeatable difference in GKA between teams in the AFL. The slope of that line is so small and the spread of the data so large. There’s just no such thing as a consistently good kicking team. If one year your team kicks well above the league average at around 62%, next year they may well repeat that feat like the Bombers in 2008 or the Bulldogs in 2011, but they’re just as likely to fail spectacularly like Brisbane in 2006 or the Bulldogs in 2012. All in all, they’re most likely just going to post the league average of somewhere around 58-59%.

I want to be very careful here so that nobody misunderstands me. I’m not saying that goal-kicking isn’t a skill that can be nurtured and trained. And I’m definitely not saying that nobody can kick straight consistently so why even bother. There’s a myriad of different strategies and techniques that coaches can use to improve goal-kicking, from physical training to psychological training to good old repetition. If you’re interested, here is a lecture on improving accuracy that was given to AFL coaches by established sports scientists.

Kicking can improve, it’s just that the level throughout the competition is so even. If a team can implement some new training routine or psychological practice to improve goal-kicking a statistically significant level and keep it there year on year without the other teams in the competition catching on and doing the same thing, that would obviously be HUGELY beneficial to them. However, whether that is at all possible is speculative and I would much rather spend my time investigating more dependable metrics to explain true differences between teams and write most of the signal for GKA% off as noise.

In coming posts I’ll explore some of these other stats that do give us a better idea of team strength and hopefully eventually build a model that can more accurately predict the results of competition games. This is just a taster of what is to come on FiguringFooty. Keep your eyes peeled so you don’t miss a thing.

Other Thoughts
Below is a collection of comments, musings, questions, figures and analyses that for whatever reason didn’t fit into the article. If you’re interested in reading more about the statistical processes involved or joining the discussion, this is your place.
Show 'Results of Regressions' (13 More Words)
Game-on-game linear regression

Show 'Limitations of Data' (286 More Words)
I really do like working with simple data like raw scoring figures. It’s straight-forward, the cause and effects are easy to understand and it stops us over-fitting and thinking we see some signal in what is actually random noise. However, with simplicity we do unfortunately sacrifice some nuance. And it’s important that we are at least aware of what we might be missing.

A big problem in this data is that it is based purely on the goals and behinds a team kicks. Because of this, shots that don’t trouble the scorers because they either fell short or went out of bounds are not included. Rushed behinds are accounted for so that they don’t distort the figures, but just what constitutes a rushed behind and what constitutes a shot that was touched on the line is open to human interpretation.

Another obvious issue is that the difficulty of shots are not accounted for at all. We don’t know what proportion are set shots straight in front and what are wild snaps out of packs 45 out. Every score is treated equally. Perhaps there is some other variable such as opponent pressure that alters the consistency of the quality of shots created. Maybe shots of a similar difficulty are actually converted relatively consistently.

As the correlations are so low I doubt this is completely true. But if you know how I could get my hands on some more detailed shooting data I would love to hear from you. Or if you can think of any more issues with using raw scoring numbers, please comment. I’d love to compile a list that we can chip away at.

Weather conditions affecting shooting is another obvious one I can think of off the top of my head.

Show 'The Season Draw' (110 More Words)
I say that taking yearly averages will smooth out “most of” the differences in draw quality because as any fan of a big club is no doubt aware, the AFL draw is very lopsided. Some teams play each other twice, others only once. And those match-ups change slightly, but not completely year to year. For example, there will always be 2 Showdowns in a season no matter what, Collingwood will always play Carlton twice etc. etc.

I have no doubt that this, and the related changes in home ground advantage are hugely important when trying to assess the usefulness of certain metrics. I’ll spend plenty of time on this in future articles.

Show 'Individual or Team' (97 More Words)
Right now I’m interested in finding entire team metrics and rating teams based on their underlying statistics rather than individual players. Compared to many other sports in the world, AFL clubs remain fairly stable from year-to-year and don’t engage in all the much player trading. This is why I can look at the bigger picture of teams rather than calculating each player’s long-term shooting accuracies. Maybe there are some players that do kick consistently better than others. It’s an interesting study and one that I definitely want to have a look at later when I get some time.