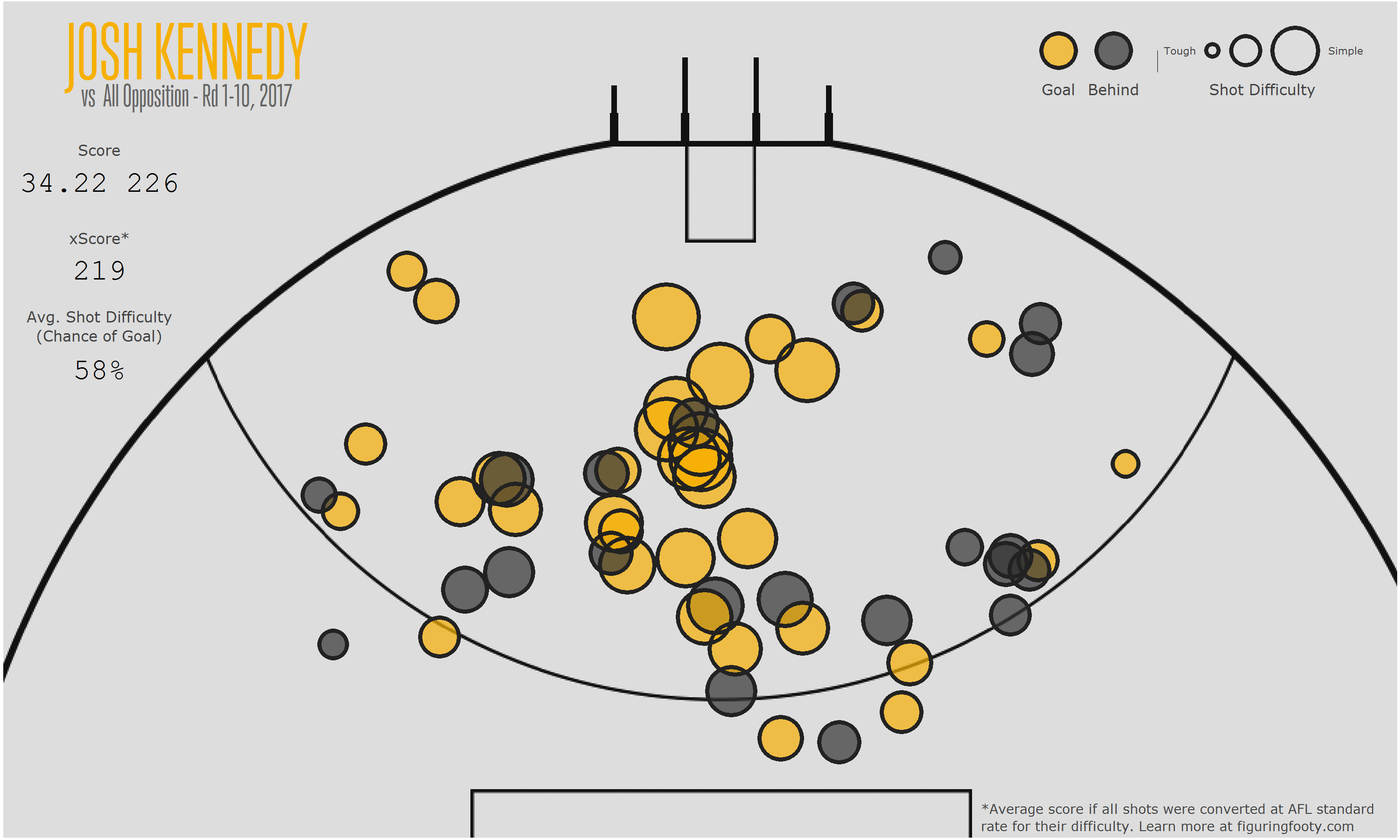 Are West Coast too Dependent on Kennedy?

This is a list of the Western Bulldog’s top seven goalkickers this season. This group of seven combined have kicked just over half all of the Bulldog’s goals this year.

West Coast’s list is shorter still, in fact, it’s the equal shortest list of it’s kind in the league.

This select group has kicked the majority of Eagles goals this year. These three have more goals than the 27 other players to play for West Coast this year combined.

A narrow focused, key-forward structure has typified the Eagles’ year so far. Unlike other teams who rely on either midfielders pushing up or a multi-faceted forwardline to kick a winning score, the 2017 Eagles have relied on a few key forwards kicking bags, and when they haven’t been able to, the whole team has struggled.

West Coast average the fewest unique goalscorers per game (6.8). This is despite, on average, kicking more goals than 8 other clubs. Carlton are averaging more goalscorers a game than the Eagles even though the Blues are kicking around 3 goals a game less. The Eagles also hold the record for the fewest goalkickers in a single game this year. In their round 9 loss to Essendon, only 3 players managed to get a goal on the board.

Getting the ball into the hands of your best players and letting them work their magic is not, in and of itself, a bad thing. However, with the Eagle’s main spearhead, Josh Kennedy copping a big scare this week,1 it’s worth taking the time to see just how vulnerable West Coast might be to an unfortunate injury.

Kennedy is the Most Important Forward in the Competition

I mentioned earlier that just 3 West Coast forwards have kicked over half of their entire team’s goals. While Darling and LeCras are certainly important cogs in their own right, nobody in the competition compares to Josh Kennedy when it comes to ticking your team’s score over. He has single-handedly kicked 26% of the Eagles’ goals this year. Only 6 players in the league are above 20% in this measure. More than one in every four of his team’s goals has come off Kennedy’s boot, no other player in the competition can say that.

In fact, he has been kept goalless only once in the last 3 years, unfortunately for him that did come in a rather important game, the 2015 Grand Final.

While that is certainly impressive, it’s probably not all that surprising. Kennedy’s a dual Coleman medalist and currently leading the bunch to his third in a row this year, of course he kicks a lot of goals. What is unique about Kennedy is how rarely he touches the ball in order to kick all those goals.

This graph shows the top ten player ranked by most scoring shots2 per possession (minimum 5 games). Unsurprisingly, this list is dominated by key forwards, kicking goals from limited chances is sort of their job. But just have a look at the gulf between the number one and two.

Kennedy is currently getting a scoring shot off roughly every 2 possessions. This is some feat. Comparable big forwards are going at about a shot every 3 touches. He was the most prolific forward under this measure last year as well. They key to this great return no doubt lies in the fact Kennedy leads the competition for both marks inside 50 and contested marks, meaning he takes more set shots than any other player. But that certainly doesn’t take away from the fact that nearly every time the ball comes his way he seems to create something.

West Coast appear to have doubled down on their “hit up the leading key-forward” game style this year, and Kennedy is the perfect man to play the lead role in that style3. He really is unmatched in the modern game. However, question marks remain as to whether this is the optimal strategy to maximise team scoring chances, and also whether the Eagles can adjust if their main man has to spend an extended period of time on the sidelines.

The answer to the first question, whether focusing all play through a few forwards is optimal, requires more research and richer data. Chain data could tell us which players target Kennedy most often, what percentage of targets are successful and what percentage are wasted, how ball movement strategies change between centre clearances, stoppages around the ground, turnover rebounds etc. Detailed GPS data could tell us even more. We could see what percentage of leads are honoured, which areas of the forward-line those leads are being made, whether better options are passed up in favour of going towards Kennedy, how well Kennedy copes with being double teamed or having a defender “in the hole” in front of his lead, what other strategies are used when something like this happens.

As to whether the Eagles can cope without Kennedy, we have yet to really get a chance to see. He’s only missed two games in the last 4 seasons, a 44pt loss to Hawthorn in 2014 and a 12pt win against the then 17th placed Brisbane, also in 2014. The trip to Metricon stadium this Saturday should give us a better idea as to whether the Eagles have some other tricks in their bag. And they’d want to have something, putting all your eggs in one basket is a very high risk strategy in footy.

Thanks to Matt at The Arc for first showing me the “goals vs goalkickers” graph while spit-balling ideas for his weekly ESPN column. And also to Cody from Hurling People Now for pointing out how often Kennedy scores per possession. You should definitely read these guys as much as possible.