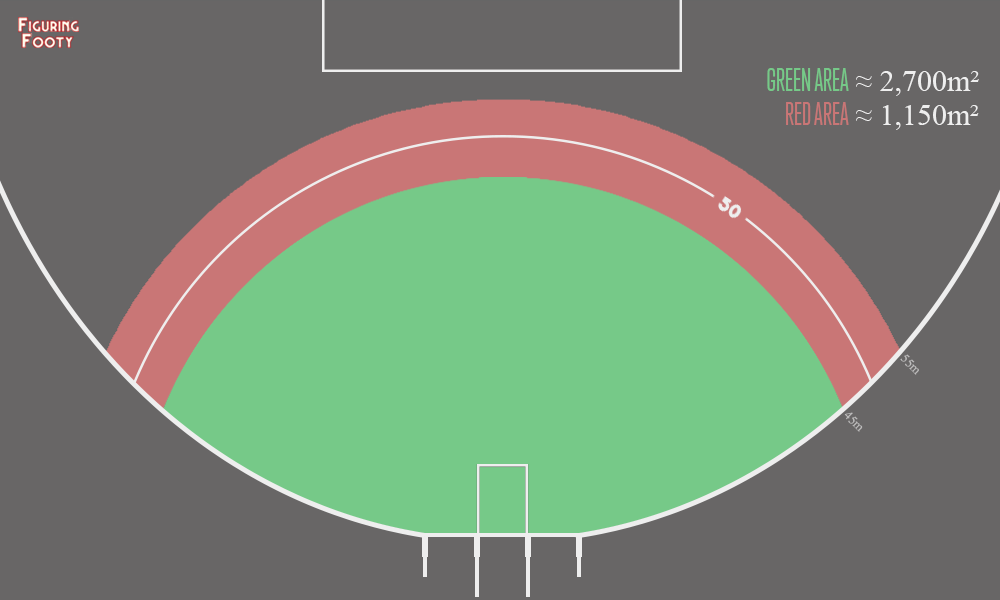 Player skills can be tough to compare. How do we work out the best player the league at taking the ball out of a pack? How do we rate a defender’s positioning ability before the ball even comes their way? Which player uses the ball most optimally heading into forward 50? These are all tough questions which any AFL analyst worth their salt should be trying to work out. However, one easier to measure skill is often overlooked at the top level, kicking distance.

At the junior level it’s blindingly clear how big an asset being able to kick further than the rest is, but once you hit the big league and everyone can more or less give the Sherrin a fair thump, this tends to get looked at as more of a party trick than a critical advantage. That said, the current premiership favourites and undisputed best forward-line in the competition, the Adelaide Crows, haven’t forgotten the value of having a guy with a bigger boot than the rest.

Looking back at data from 2015, 2016 and the current season we can get a sense of how many goals different clubs have kicked from outside the 50m arc. In this time there have been 1013 goals kicked from outside 50 in 449 games. So an average of a little over 1 a game per team. However by looking at who’s responsible for these goals, you can see that this average is not spread between all teams equally. Adelaide have kicked 92 goals from outside 50 in the last two and a bit years while Melbourne have only kicked 29 majors from outside the arc.1 That’s a drastic difference in both playing style and return. Unsurprisingly the Crow’s captain, Taylor Walker, is responsible for a fair chunk of these goals. In fact Tex and Buddy have individually both kicked more goals from outside 50 since 2015 than the entire Demons squad. Here’s the top-10 players in the comp over that period.


Franklin is a well documented freak, but Walker’s ability outside 50 is slightly understated. He’s certainly kicked fewer goals all up than either Josh Kennedy or Tom Lynch, but his boot from far out provides more benefit to Adelaide’s forward structure than it would if he was bagging more goals, closer in.

A major reason Adelaide’s forward line is considered so dynamic is their ability kick goals from a wider range of positions than any other team. Eddie Bett’s work from the pockets is obviously the most eye-catching, but the collection of players with multiple goals from outside 50 is also much larger than other clubs. Since 2015, 15 players currently on their list have kicked multiple goals from outside 50. Joining Tex and Brodie Smith are Josh Jenkins, Paul Seedsman, Rory Sloane, Richard Douglas and Mitch McGovern as regular big bombers. Betts, Atkins, Knight, Cameron, Brown, Talia, Menzel and Thompson also have multiple goals to their name from outside 50. Adding evidence to the claim that this is a deliberate recruitment decision rather than just coincidence is the fact that most of Adelaide’s ex-players sit fairly high up in their new clubs ranks for long range goals. Jack Gunston, Kurt Tippet, Patrick Dangerfield, Bernie Vince2 and Shaun McKernan are all in the top 3 at their respective clubs.

To see why a recruitment policy favouring players with the ability to kick long is a smart idea, we need to look at the amount of extra space created by pushing out your forward “goal scoring zone” to 55m out from goal rather than the 45m out some other players operate at. The figures in this image are based on an approximation to the MCG. These numbers differ from ground to ground, but the principle remains the same. Because the ground opens out wider the further you get from goal, adding an extra 10 metres to your kicking distance does not just increase your opportunities by 20%, but rather increases the size of your “goal scoring zone” by around 43%. This is a massive increase in the area the opposition needs to defend, both from leading forwards and midfielders/backmen drifting forward.

It’s true that none of this is “high xScore” area, but if you can make the distance, the average player is still about a 50% chance of converting a shot from this area into a six points.

The benefit of being able to kick from these far out distances extends much further than whatever points you may be able to nab. Forcing the opposition defence to guard that red area creates a bunch of space over the top. For Adelaide this allows Betts, Cameron and the hard running Jenkins and Lynch space to do their work. When you start to consider the additional benefits around the ground from having long kicking halfbacks and midfielders, such as the extra speed with you can transition the ball and the ability to clear lines, you start to realise that having a big kick might have just as much benefit to an AFL player as it does in junior footy. The Crows are certainly using it pretty well right now.