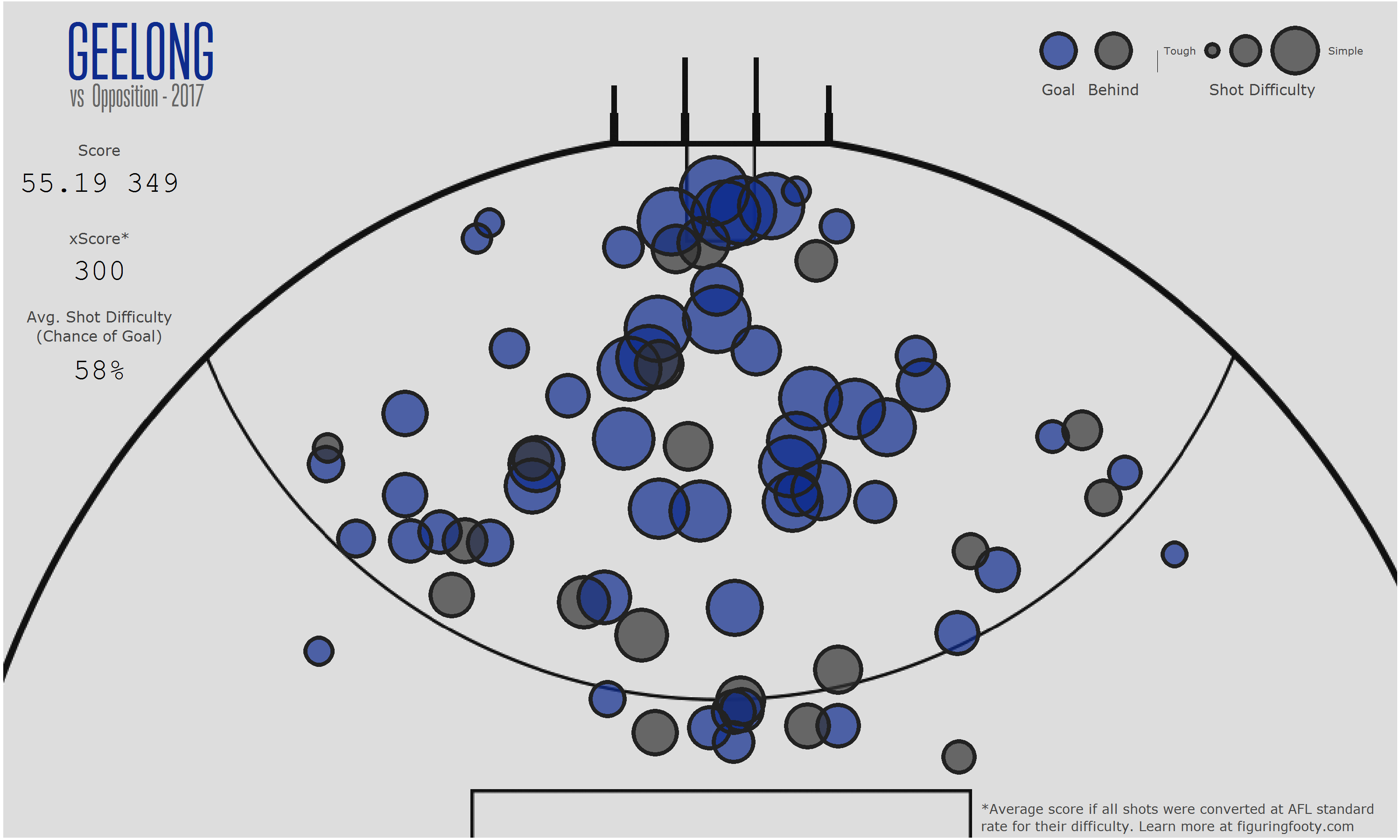 You may have noticed the website has been a bit quiet lately. Along with the usual “life commitments” spiel, the main reason for this lack of action has been a data holdup. An analyst working without data is bit like 44 blokes trying to play a game of footy without a ball. While they may be dreaming up speckies, they aren’t gonna get much done.

Luckily, with the help of a reader, I’ve managed to sort out a new data source in 2017 that will allow me to get back into one of the most important bits of work I was doing last year, shot creation and goal-kicking analysis. You may have even caught me tweeting out some new stuff last night.

The score of a game is just one method by which we can get an idea of which team is creating the better chances up front. One other method used by most footy fans is considering the number of scoring shots. A team leading 3 goals straight to 1.11 is probably not dominating the game to the standard they’d like. The problem with this method is that goals/behinds doesn’t tell us anything about the difficulty of the chances each team is creating. Maybe a return of 1.11 is about right if all a team is doing is pinging it from the centre square. To help account for shot difficulty, I previously introduced the xScore value based on my shot difficulty model.

If the numbers and squiggles in those articles put you off, fear not, xScore is actually a very straightforward concept. xScore is simply the average score an AFL average standard team would kick if they took the same shots. The AFL standard kicking ability expected for a particular shot is found by looking at the competition kicking record (from 2012-2016) from the same type shot (set shot, shot on the run, snap, ground kick, play on from a mark) from a similar spot on the ground.1 This is “smoothed” into a model using regression. For example, here are the AFL average conversion rates for a set shot at different points on the ground. The actual model doesn’t “group” like this, but it makes for an easier visual. So xScore gives us a value for the quality of shots each team has managed to create. Comparing this with the actual conversion rates means that we can break down score into two separate team skills, shot creation and conversion. This is often very handy for working out why a particular team is on top.

Over the course of a season it can be shown that most teams2 kick at about the AFL standard. Very good and very poor kicks are few and far between. As a rule of thumb you want your team winning games because they’re creating great chances, not because they are kicking straight on any particular day. There are a few mixed signs here that I’m going to do my best to quickly unpack. First the good signs.

Over their first three wins, the Cats have outscored their opponents by 72 points altogether leading them to a healthy 125.6 percentage on the ladder.3 They are also restricting their opponents to tougher shots than they themselves are creating. The average Cats shot this year had about a 58% chance if kicked at the AFL average, their opponents took shots with an average conversion rate of only 54%. They have defended their corridor relatively well and allowed very few shots from in and around the goal-square compared to those they have created themselves. If both teams created 25 shots a game at this level, that would be worth about 1 more goal a game on average.

That transitions us right into the more worrying signs. Both teams aren’t creating 25 shots a game. Over the admittedly small sample of 3 games, the Cats had 74 scoring shots and their opposition had 78. Only once this year have they taken more shots in a match than their opponent, in round 1 against a Freo team more happy to kick the ball straight to them rather than try and hold onto it. If every shot was converted at its AFL rate, Geelong would have scored about 300 points and conceded about 296 over the three rounds. Through a combination of very straight4 kicking on their part and some waywardness from their opponents, they have managed to turn this into 3 wins.

xScore had them losing to Melbourne by 3 goals last week rather than winning by 29. Opposition kicking like the Dees of last week is not going to save you very often.

This article is by no means meant to infer the Cats have been poor, they are a clear top-8 contender so far. But rather I wanted to use xScore to point out that their 3-0 start has flattered them and a 0-3 Hawthorn may well give them a better run for their money on Monday than last place playing an unbeaten team would usually suggest. God knows Hawks fans need it.