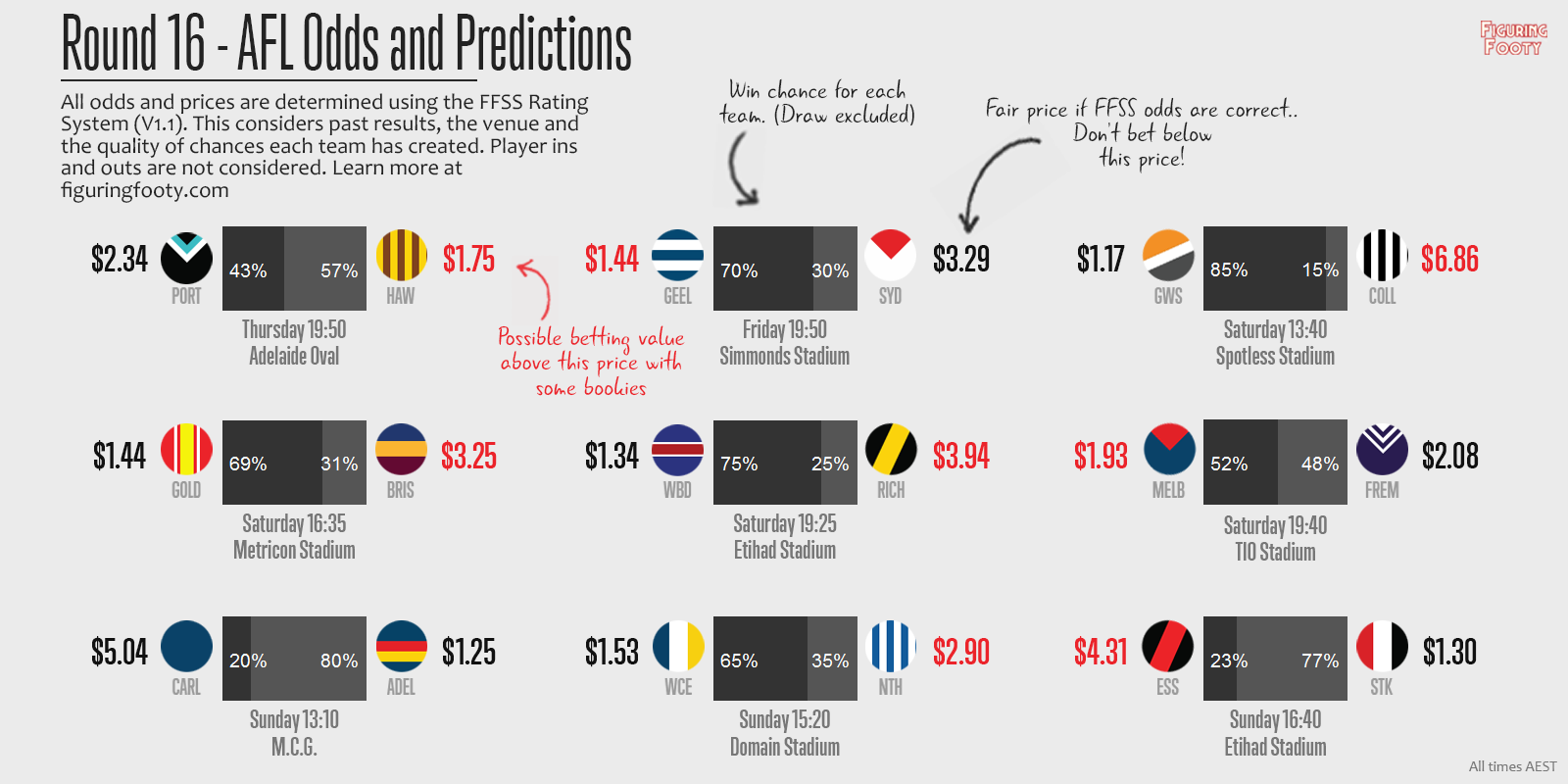 Today’s article and the shortened week mean I haven’t had the time to write up a proper preview and possible value bets for this round.

No preamble about the general state of footy this week. But there is now some general discussion below on some potential value bets the FFSS model has flagged up this week. This was flagged up yesterday as being a potential value situation for Geelong. Following news of the inclusion of Mitch Clark, the market has corrected to be pretty much in line with the FFSS predictions. Whether you think this sort of movement based on the inclusion of one player (particularly a forward) is sensible or not is certainly up for debate.

Outside of that, with the odds the way they are, FFSS can’t in good faith recommend a bet either way. So there’s likely not much interest here outside of a cracking good game.

Bookies have Melbourne at around the $1.55-$1.59 range. This is likely where FFSS would put them as well, if this game were being played at the MCG.

Instead, the Dees have sold their HGA once again and the trip to Darwin really levels things up. The last time they did this was in Round 10 when they were beaten in an important match by Port Adelaide in Alice Springs and effectively lost touch with the 8.

Will we see more media debates this week about the “value” of a home game and whether struggling clubs should be so ready to sell them? Well the model still thinks the Dees will win, so maybe not. But I definitely think that Freo hold some value with a bookie implied win chance of 40%.

Well the North bandwagon has been well and truly emptied over the last month or so. When the public get off a team so hard and so quickly they often over-correct, and value bets may present themselves.

Whether this is one of those instances is probably up for debate. But the FFSS model has the Kangas at a 35% chance of causing an upset, while bookmakers will let you take an implied chance of about 31%. This difference, assuming the FFSS model is correct2, spells potential value.

As it often does, FFSS thinks there may be some potential value to be had on other outsiders this week. Collingwood, Richmond and maybe even Brisbane and Essendon get flagged as value bets. It’s important to remember that these are all still pretty big outsiders. Looking at lines may be more beneficial in these cases, but I’m not going to recommend any bets on this for the time being.