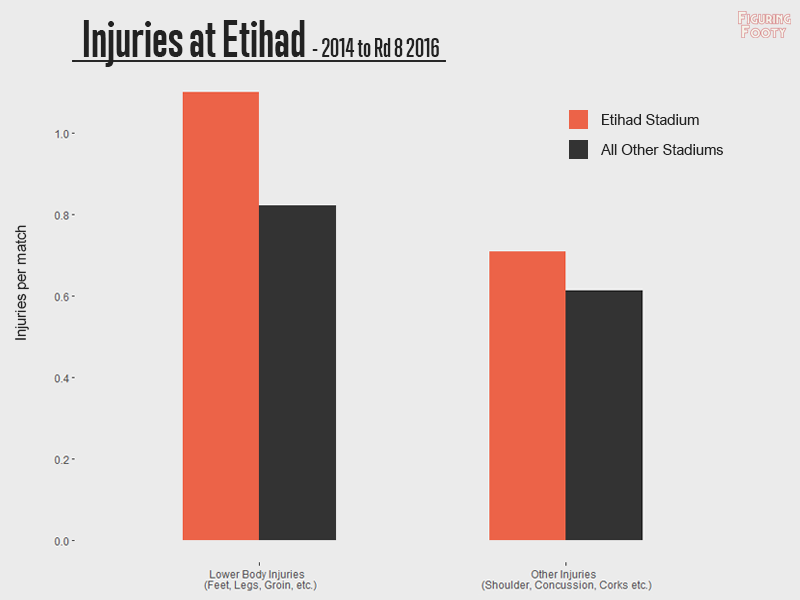 Posted in Trends and Historic Analysis

A broken leg to Levi Casboult has spurred me to post a quick update to an article from a few weeks back on the increased amount of injuries that occur at Etihad Stadium compared to other stadiums. I found there that, over 2014 and 2015, there were significantly more lower body injuries reported in the official AFL post-match report in games played at Etihad than those at all other venues.

These include knee injuries, such as ACLs, ankle, foot, hamstring, calf, groin, hip and abductor type injuries. I have removed cork and bruise type injuries as these should not be affected by the ground, but rather players running into each other.

So far in 2016, of the 16 games played at Etihad, we have seen 17 of these lower body injuries reported. Compare this to the 41 reported from 56 games at other venues.

These figures do not account for the seriousness of each injury, but bear in mind that they do include high-profile serious injuries such as Bob Murphy, Jason Johannisen and now Levi Casboult.

Adding this years numbers on to last year we can see that there is a big problem at Etihad. Assuming two games are played there each week, Etihad Stadium sees an extra injury every 2 weeks from what we would expect if we played each of these games at a different place.