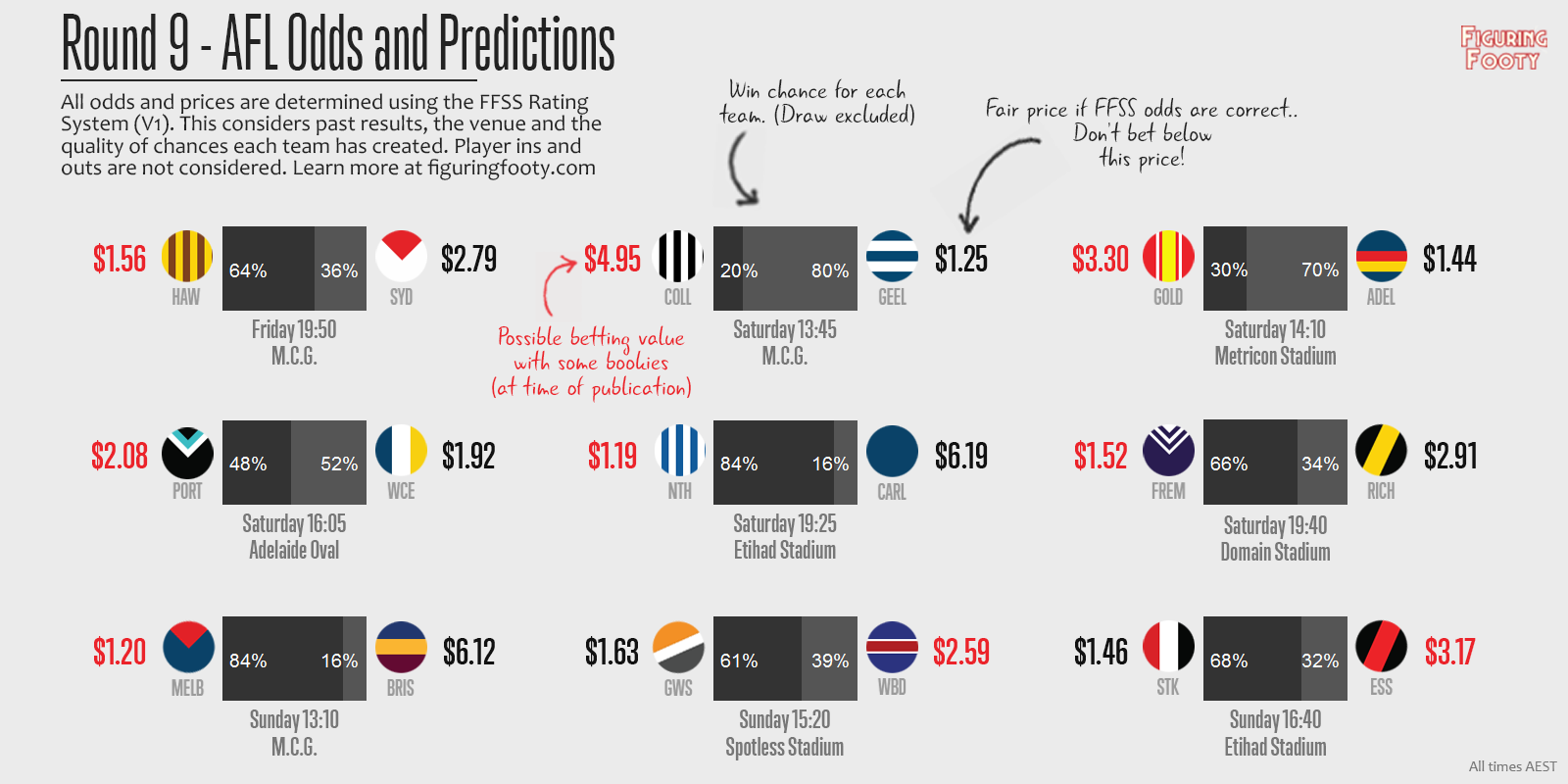 Posted in Ratings, Tipping, and Uncategorized

What was shaping to be a potential top-4 battle on Friday night between Hawthorn and Sydney has been overshadowed this week by the terrible news that Jarryd Roughead has suffered a recurrence of his melanoma and will now be undertaking a battle far bigger than anything that happens on the football field.

How his close friends and teammates at Hawthorn will cope with the news remains to be seen. Will they be understandably shaken and hence, off their game? Will they use it as inspiration and hit Sydney hard for a rousing win? Or will their performance be more-or-less unaffected by the outside news. Regardless of which of these scenarios is actually the case, I have a feeling that the AFL media will be going with one of the first two stories come full time on Friday night.

The Roughead situation gives us a chance to remind ourselves about the inefficiencies and shortcomings of all predictive sports models we have today.

Firstly, a primer for those new to Figuring Footy. I maintain a (mathematically defined) team rating system dubbed the Figuring Footy Scoring Shots (FFSS) system. These ratings use past results1, game margins and also the quality of chances that a team has been able to create relative to their opponents2. I then use the ratings of each team, accounting for Home Ground Advantage, to predict the probability that they will win their match this weekend.

The main reason I write this blog each week, rather than just posting the FFSS model’s tips on their own, is to get an intuitive feeling about how the model is working in the real world. This will allow me to see what it is doing well, as well as what improvements can be made for the future.

I wrote last week about how the model is unable to tell that Adelaide have been playing flat-out, high intensity footy all year and hence may be getting fatigued and sloppy3. I also wrote the week before about how the model struggles to rate teams that have been hampered by injury/suspension in the short term.

This week, the model ignores any possible psychological effects that Roughead’s cancer may have on the Hawthorn players and instead makes a prediction just as it would any other week.

If you are using the FFSS predictions to help you tip or make a bet this week, please hold this in mind. A good predictive model is a powerful thing, but it’s results must be interpreted by someone who understands what the model doesn’t. Rather then write previews for every match of the week, I will instead comment on interesting discrepancies between bookie odds and FFSS odds, why these may exist, and whether there is any value in betting at the available price. This should always be framed in the context of education, I am not advocating betting, but rather discussing the models findings in terms of “value”.

There has been some talk that Gary Ablett will not pass his concussion test and will not play in this match. That obviously makes the Suns less likely to win4, but one player does not necessarily make or break a team in a sport where there are 17 other guys out on the park in your colours.

Don’t get me wrong, I think Adelaide will win this in a canter. But the $12 and implied 8% win chance for Gold Coast seems a touch low. It’s worth a very cautious value bet, or maybe a look at the lines.

Outside of not including injuries and playing lists in it’s probability assessment, FFSS has one other major difference5 compared to how a footy fan would think about a game. FFSS makes no attempt to account for playing style. It sees a team rated 1506 (like Port) in the same way it sees any team rated 1506.

What it does not consider is that Port are essentially without a ruckman coming up against a team with quite possibly the most dynamic ruckman in the game in Nic Naitanui.

What that is worth, you will have to ask yourself. $3.25 is currently being offered on Port by some bookies, which equates to about a 31% chance of winning. The true probability of a Port win is likely under 48%, if you think it is higher than 31% you should think about a bet.

Even though they are short priced favourites and up against a team that has won 4 on the trot, a North bet probably still holds some slight value here.

I have written before about how we are to deal with Freo. They sit bottom of the ladder, winless, and because of this have packed their season in at a historically early point. However, there are still plenty of positives about their games. They are creating a good number of chances, but just converting them very poorly. This is most likely down to plain old bad luck. We would more often than not expect this to turn around and their conversion to improve as the season goes on.

However, if they are playing for losses, like some in the media believe, then an improved conversion is hardly a reason to bet on them.

Still, I could see value in a cheeky bet here before we know more about how they will play the rest of the season.

Some more good value on a pretty short priced favourite.