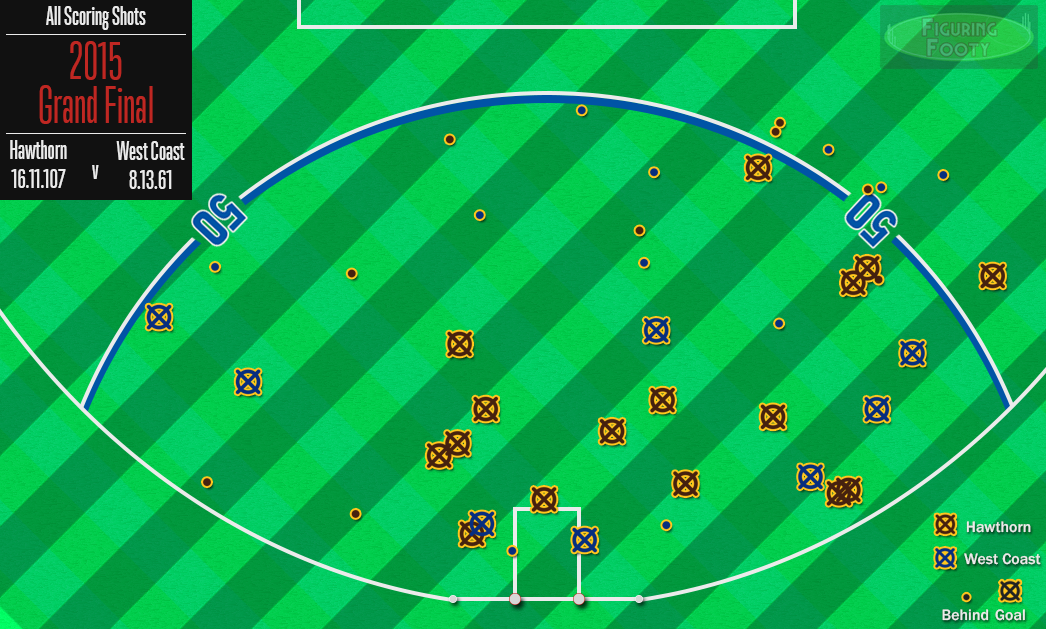 A Brief Analysis of Scoring Shots in the Grand Final

I have been playing around with different types of data visualisation lately, particularly visualising scoring shots. I’m hoping to clearly see the quality of chances each team created to get a better idea of the styles they are playing and also their finishing ability. I previously looked at Goal-Kicking Accuracy in a very general sense and found that every team converts at more-or-less the same percentage (Goals/Behinds) in the long run. However, in that post I didn’t consider the quality of chances created, which is something I plan to spend much more time on in the future.

Another Year of Brown and Gold

Saturday’s Grand Final gave me an excellent opportunity to try out a new little plot. Below is a picture showing the field position of every point-scoring attempt during the game. I’ll do a quick little analysis of the game and briefly explain what I think this sort of visualisation helps us understand about the result, but for the most part I’ll let you draw your own conclusions. Words are clunky and far too often tiresome, good visualisation should tell it’s own story.

Before I get into it, I should point out that map only displays attempts that troubled the scorers. Shots that finished out on the full (from memory, only Rioli’s first quarter effort) or those that didn’t carry the distance and were not knocked through by the defenders are not shown below. Rushed behinds without any genuine attempt by a forward are also omitted.

All in all, I think the map shows really well how the game was won. Hawthorn worked the ball into very good areas and capitalised when they were there.

If you have any questions, or want to provide your own spin on the results please comment. I hope to keep myself busy working hard in the off-season and have even more fun statistical toys to play with when footy comes back after its long break.