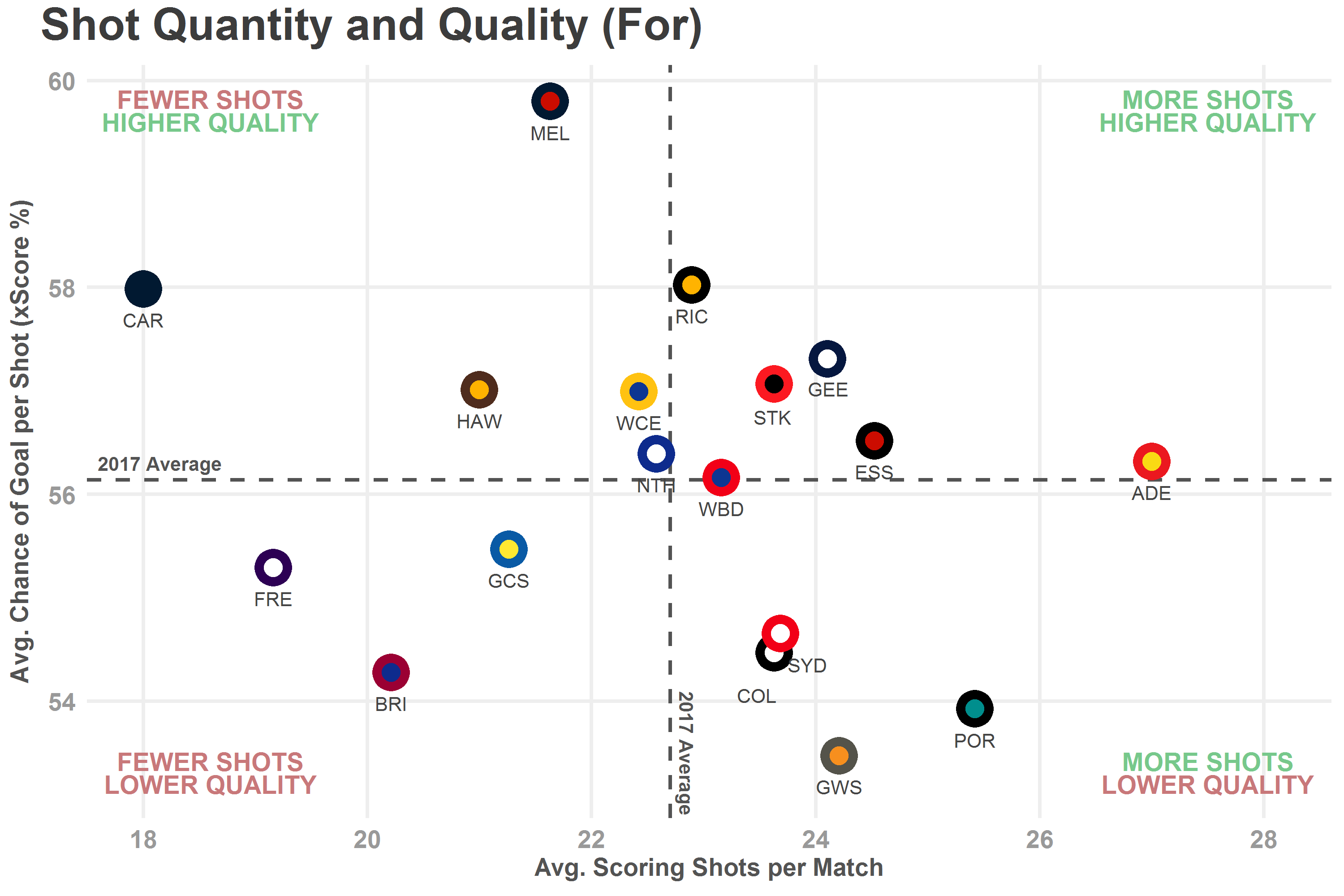 The Quality and Quantity of Shots Created by Each Club

Kicking a winning score is all about creating chances. One of the many interesting quirks about Aussie Rules footy is that there doesn’t seem to be any accepted dominant strategy of how to go about taking these chances. Some sides like to pepper the goal with as many chances as possible, whereas others, if given the ball out on the boundary 45m out will kick it to the top of the goal-square in hopes of an easier shot. Obviously there are many factors which influence this decision, including but not limited to opposition quality, game state1, each team’s ability to catch a defence off-guard with swift ball movement, each team’s ability to defend a quick turnover, and of course the player’s ability to actually make the journey2. Far too many for one post.

Rather than look at the minutia of tactical decision making I’m going to take a macro view and look at the quantity and quality of shots each team has taken (and conceded) per game this year and make general comments about some of the different styles on display in the AFL.

Quantity is easy. This is simply how many scoring shots they have kicked on average. To understand the quality of shots I use my xScore model, which gives a probability estimate of the chance of an average player kicking a goal given the position on the field and the type of shot. For example, here’s the probability of kicking a goal from a set-shot at different positions. Over the course of the season, each of the 18 team’s chances have averaged out to somewhere between 53% and 60%.

You can see some immediately apparent differences in style. It won’t surprise anyone that Adelaide is averaging the most scoring shots per match. Their multi-faceted forward line is managing almost two shots a game more than their nearest rivals. The balance between their half-back sling-shot running which allows the “Joe(nkins) the Goose” goals, quality contested markers and a widespread ability to kick goals from outside 50 means they have multiple avenues to goal which average out to having roughly the competition-wide difficulty per shot.

Melbourne too have relied on good ball movement to open up the forward line and create high quality chances. Their top goal scorer for the year, Jeff Garlett is testament to how often the Dees have managed to “walk the ball in” so far this season. Garlett has taken 21 shots within 15m of goal, 5 more than the next best player in the competition, Adelaide’s Eddie Betts.

Melbourne however lack the plan B required to kick a winning score when the game is not on their terms. They’ve taken the 3rd fewest shots from outside 50 this season and have frequently burnt the ball trying to set up better chances in situations where other teams may have taken shots. They rank 16th in the competition for Scores per I50.

GWS have been the polar opposite of the Dees in regard to shot quality. The Giants have taken, on average, the toughest shots of any team this year. This is usually a high variance strategy, but the Giants have managed to get through some close games (relatively) unscathed, benefiting greatly from the sublime kicking skills of their young talent. When I looked at the best kicks at goal in the comp two weeks ago, every single GWS player to have taken at least 10 shots was kicking above expectation. In fact their two key forwards, Patton and Cameron rated as the 1st and 3rd most accurate kicks in the comp among players who had taken at least 40 shots.

As I’ve said plenty of times before, it’s very rare that a normal, AFL quality team kicks consistently above expectation (xScore) over the long term. Individual players sometimes do, but at the team level these good players are usually balanced out by average players, and over the small sample of a season our best bet for a team’s scoring return is just their xScore. However, we may well be in a situation with GWS where we’re no longer talking about a normal, AFL quality team. Only time will tell.

As fluidity returns to their midfield, I expect to see the average quality of the Giant’s chances rise. The flip side to shot creation is of course preventing your opponent from doing that very thing. As evidenced by the rejigged x-axis scale, Brisbane are still not great at this side of the game. The two Queensland sides, Brisbane and the Gold Coast, are the only two teams to find themselves in the bottom quadrant in both the ‘for’ and ‘against’ graphs.3

One interesting comparison at the defensive end of the spectrum is Hawthorn and Geelong. The two Qualifying finalists of last year have been conceding a similar number of shots per game on average, but the Hawks are conceding higher quality shots than any other club, whereas the Cats are conceding more difficult shots than the rest of the comp. A picture tells the story much better. Here are the areas in which Geelong have conceded the most shots this year: The Hawks have conceded 64 shots within 15m of goal, the most in the league. In contrast, the Cats have conceded 41 shots, the 2nd fewest behind Sydney. Geelong however do have the benefit of playing on the skinny Simonds Stadium which is easier to defend and sees fewer goal-square goals than any of the other regular venues.

Perhaps most interesting has been the effect of Hawthorn’s much publicised tactical shift after the bye week. Shifting Sicily and Gunston into defence has not at all prevented the opposition from creating quality shots, pre-bye the average opposition shot had a 58.3% chance of goal, post-bye this has actually gone up to 60.8%. What has changed, and quite considerably, is the quantity of opportunities opposition sides have been able to create. Pre-bye teams were averaging 25.7 shots a game against the Hawks, since then they have only managed 19.3 shots a game on average. And in that time Hawthorn have faced some of the best attacks in the league in Adelaide, Geelong, and Sydney. If they kept that going over a season, they would be one of the best defences in the comp.

As I said in the intro, the reasons for all of these numbers are far too complicated and numerous for one post, but they do give an interesting insight into the ways certain teams are playing. If you can pick out anything interesting about any team I’d love to hear about it. The best place to find me is on twitter.