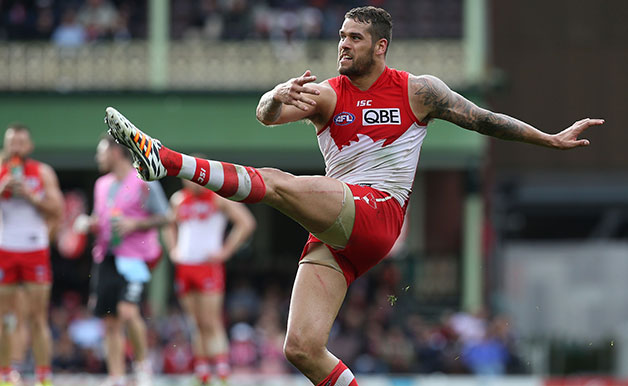 The 6 Best Long Range Goals of the Last 6 Years

Only 41 times in the last 10 years has a player kicked 8 or more goals in a game. Last Sunday against Brisbane, Buddy Franklin did this for his 10th time. Among that bag of 8 was a classic Franklin goal where he took possession of the ball in his own defensive half, worked his way forward and eventually let loose 67m from goal into an unguarded goal-square. If you haven’t seen it, here it is:

This inspired me to go through my scoring shot data going back to 2012 and relive some of the more notable long range efforts. Over this period there were 28,530 goals kicked, but only around 150 of them were kicked from further out than 60m.1 And a fair chunk of these were kicks to full-forward which somehow slipped through the contest and over the goal line without taking a touch.

There are probably only about 40 odd examples over the last 6 years of a player backing themselves in from outside 60m and then actually delivering. These are 6 of my favourites.

Perhaps it shouldn’t shock you that the two longest goals of the current season have come from the two players with the two best long range records. This kick from Tex does one thing that no other goal on this list does, it travels through on the full. Even if there was a man on the line there probably wouldn’t be much he could do. Pair with this that the fact this kick sealed a Showdown win and you’re gonna struggle to find a cleaner strike of a high pressure kick this year.2

There’s something very exciting about a player who just feels like they’re going to take a crack at goal from anywhere. Hurn is definitely that type of player. He takes the ball in line with the centre circle here and there was never a doubt in his mind that he could clear the last line.

This would still be a fantastic goal if it was 40m closer in. I wouldn’t be suprised if the smother, collect and shoot from 70 out in the one move has never been done by anybody else ever.

This is the longest3 goal kicked over the last 6 years. It gets a bit of help from a slippery surface, and a short SCG field makes it look even longer, but any goal from the dead centre of the ground deserves to be fawned over for years.

This long-range bomb by Tom Bell was kicked in Wellington. Despite the fact it’s a cracker, it’s probably not all that memorable, I mainly included it because I wanted some #relevantcontent ahead of this weekend’s China junket. Which Power or Suns player will beat this record for the longest AFL goal ever kicked on international soil!? I can’t bear the tension!

And of course Buddy’s memorable effort from last year needs to be included in this list somewhere. I think my favourite part of this goal is the cat and mouse he plays with Hawthorn’s last defender Kaiden Brand. Brand knows he needs to go back and guard the goal-square, but if he leaves his man, Franklin will just chip it over the top for an easy mark. Eventually he just lets rip and kicks a valuable goal at a crucial time of the game. Classic Buddy.