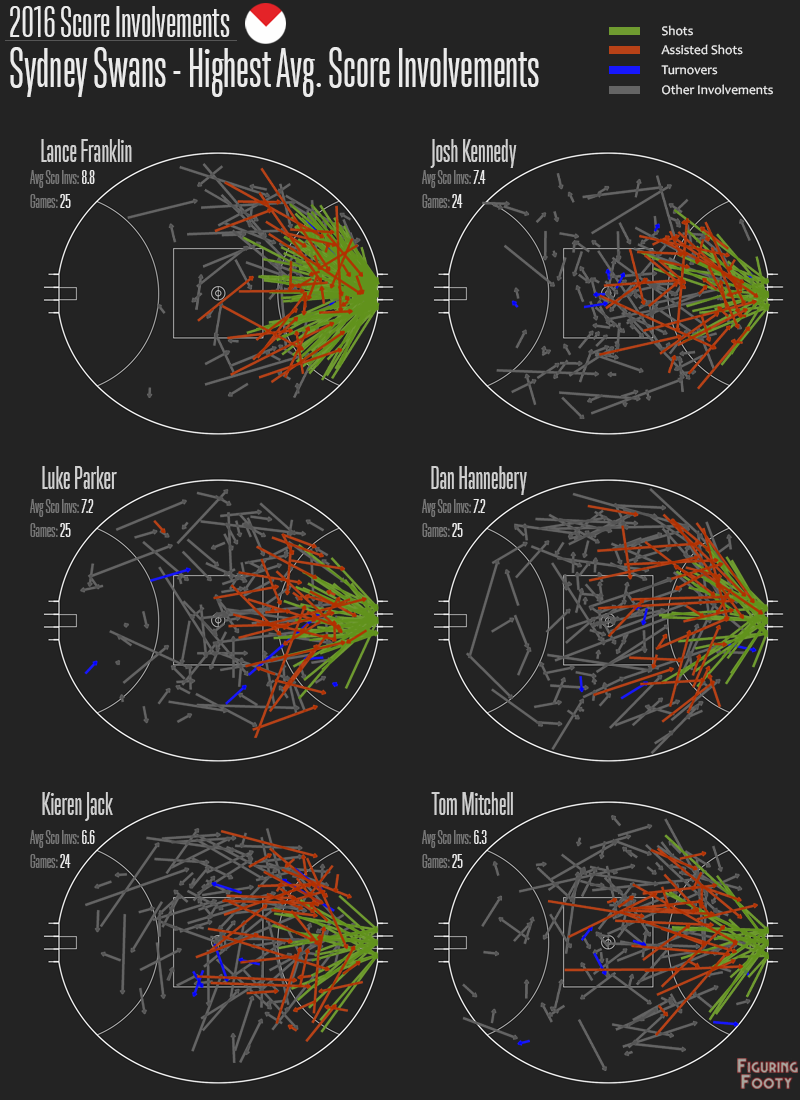 Grand Final Preview (Part 3) – Do Dogs Have the Structure to Kick a Winning Score?

On Tuesday, I had a look at the unique way each team defends. Yesterday, I retraced each club’s season and saw the matches and players that got them to the big dance. Today I look how both sides can kick a winning score.

Sydney Have the Guns to Kick a Big Score

Sydney have averaged around 2-and-a-half goals a game more than the Dogs this season, so it won’t surprise anyone to hear the Swans have the upper-hand in this part of the battle. However, I think it’s important not to just declare “Sydney Forwards = Better” and leave it at that, but rather to look at some of the structural differences between the two sides.

One way to do this is to look at each side’s shot heatmaps, similar to the defensive shot heatmaps, and further investigate any patterns that arise. HPN did this sort of thing with Sydney and Geelong just last week.

A slightly more messy, but nevertheless interesting, way of determining these differences in structure is to look at which players contribute the most often to their team’s scores, their Score Involvements.

This graphic shows every Score Involvement from Sydney’s top-6 most involved players.1 The first thing that jumps out when looking at this is just how productive Lance Franklin actually is. I guess that’s what 9 years and $10 million buys you.

Once you get past Buddy, you’re met with five players with near identical production. These five combine to form that great Sydney midfield you keep hearing so much about. Four of these five are in the top-10 for both contested possession and disposals,2 they’re all in the top-50 for clearances, and they all sit firmly in the top-25% of midfielders by Player Ratings.

Kennedy is probably, stats wise, the best of the bunch, but it’s hard to draw too many differences between them. They are all elite players. This is undoubtedly a reason why Luke Parker didn’t make a closer contest of Monday’s Brownlow Medal.

Moving past these top-6 players, Sydney have a pretty versatile list of players getting involved in scoring. Isaac Heeny (Avg. 5.6 ScoInvs), Ben McGlynn (5.6), Kurt Tippett (5.8) are all forward-line faces you would expect to be getting involved in the goals. However, the Swans are a clear No. 1 in the comp for rebound 50s, and good contributions from Callum Mills (3.9), Dane Rampe (3.2) and Aliir Aliir (2.8) are testament to this.

Sydney play a very robust brand of footy centred around stoppages. Their skilled midfield tries to win the contested ball and immediately set up scoring chances. If they fail to do this, their defence holds shape, shuts down opportunities and patiently waits for a chance to move it back up to the other end.

The Western Bulldogs Spread the Load

Here’s what the same graphic looks like for the Dogs: Obviously there are fewer lines on this graphic simply because the Dogs have fewer scores. Looking past that, notice that two of their top-6 average contributors (min 10 games) will not be playing this Saturday. Mitch Wallis is out with a broken leg and Koby Stevens looks to be halfway out the door already after falling out of favour with Luke Beveridge.

Bontempelli is clearly the crucial element of the team. Even after removing his direct goals and assists, if you consider that he’s the Dogs’ best contested ball winner, it’s clear to see why everybody is so excited about the 20 year old.

Jake Stringer is the only traditional forward of the bunch, and even he spends a fair bit of time setting things up from defence. This is indicative of the Dogs as a whole. Look at some of the players who just missed this top-6 list: Jack Macrae (5.6), Tom Liberatore (5.5), Tory Dickson (5.4), Lachie Hunter (5.3), Toby Mclean (5.3), Liam Picken (5.2).

What worries me is that there is not enough variation there. All of these players are chipping in with good contributions, but they are all midfielder type bodies that may drift forward from time to time. I’m certainly not the first to point it out, but the Dogs could really benefit from a firing Tom Boyd or Stewart Crameri.

As the finals so far have showed us, the Dogs are a smart club and they play to their strengths. They like to swarm the ball hard and keep the contest in the midfield, whether the Swans will let this happen will be very interesting to see.

How Do These Styles Fare Against Each Other?

The more I look at Sydney, the more I see a very accomplished and complete AFL “team”. They have some excellent defenders with an excellent defensive structure, they have an all-star midfield that would still pick apart pretty much any other in the game, and they have the most naturally skilled forward in the comp supported by some big bodies and experienced crumbers.

The more I look at the Dogs, the more I see a team of young guys who are all individually very very good at footy. They have managed to put on three marvelous displays over the last three weeks and the quality of their players and their game plan have got them over the line. However, I see them lacking a bit of structure. It may be that I haven’t watched enough of them this year to get a really good grasp of their style, but on the face of it I see a team full of players that can be chucked on the ball at any time, but may not be best suited for hard and fast roles.

This may well be an intentional tactical and recruitment decision by the Dogs. Caleb Daniel was passed up by other teams as they saw him as too small to play a traditional role. In his short career so far he has shown that may not really matter.

There’s a certain magic in the air around all of Melbourne this week and the Dogs’ story is no doubt remarkably bonding for those involved. Who knows, maybe this team of young guys will be able to play above themselves one more time.

Check back tomorrow for my last preview before the big game.