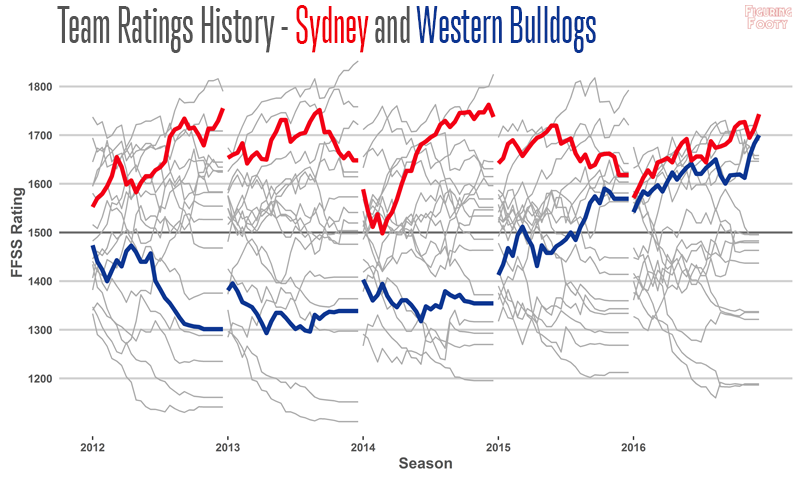 Grand Final Preview (Part 2) – A Team of Champions or a Champion Team?

Yesterday, I had a look at the unique way each team defends. Today, I retrace each clubs season and see the matches and players that got them to the big dance.

A Quick Look at the Last Five Years

If you have paid attention to the media at all over the last couple of weeks, you would know that the Dog’s journey to the Grand Final has been nothing short of a “fairytale”.

Judging a team’s development over time is always a tricky process. Luckily for me, I have a team rating system which I’ve been using throughout the year to write weekly previews. The FFSS (Figuring Footy Scoring Shot) is an Elo based ratings system which uses results weighted by quality of opposition, venue, margin and Shot Quality Production in order to maintain an updated relative rating of each team in the competition. 1500 FFSS rating points is considered to be a smack bang average team. Anything over 1600 is good, anything under 1400 is pretty shabby. Here’s how FFSS has seen the Swans and the Dogs since 2012 and the introduction of the 18-team comp: Sydney have unsurprisingly always been highly fancied, playing Grand Finals in 2012 and 2014 and featuring deep into September every season. The Western Bulldogs on the other hand have come from the clouds. Ranked in the bottom 4 or 5 teams up until last year when their young guns started playing first team football. Since then, their rise has barely slowed.

There was a slight drop-off towards the end of the H&A season which most attributed to their bad luck with injuries. However, since the finals began they have blown those cobwebs away with 3 great performances against 3 fancied teams. As of now they are rated one of the truly elite teams in the comp.

A Closer Look at This Season

To get a sense of how each team’s season has progressed, I wanted to look at the quality of opposition faced round by round. Here’s how Sydney’s season looked to FFSS: The opposition rating is simply their FFSS rating at the time +/- any Home Ground Advantage. For example, before their round 4 clash at Adelaide Oval, the Crows were rated as a 1607 FFSS pt team. The HGA of Adelaide Oval was 98 pts.1 So the total Opposition Quality was 1705.

When the two sides met again in a Semi Final, Adelaide were rated 1677, but the HGA of the SCG meant their total Opposition Quality was only 1579. Only a little above an “average” team.

The Swans have not lost to a “below average” opponent all year. Their loss after the siren to Richmond was their worst this season, with the Tigers rated 1517 at home. Their best win came last week against Geelong at the MCG. The Cats were rated 1808. A team rated this highly would be expected to beat an “average” side about 9 times out of 10. The Dogs lost twice this year to “below average” opposition. These came against St Kilda and Fremantle and were both during the Dog’s down patch towards the end of the season. 3 of their 4 biggest wins have come this finals, with the biggest being the Elimination Final win against the Eagles at Subiaco and the big Prelim against the Giants last week.

The Players Who Have Got the Job Done

If rating teams is hard, rating players accurately is nigh on impossible. Regardless, it’s still worthwhile to have a look at who is pulling weight at each club and which positions are dominant.

To do this I had a look at the official AFL Player Ratings for every player to have played 5 or more games for either the Swans or the Dogs this season and compared this to the rest of the competition.

For those who don’t know, Player Ratings aim to determine an “equity added” value for each and every player. In it’s simplest terms this means looking at each possession and determining how likely it was for a goal to be scored from the location and type of possession before the player touched it, and how much more likely it is now that they have contributed.2

I’ve written about one of the key things that this sort of ratings system misses previously (hint: it’s the Bont). It should also be noted that the values used are based on a 40-game rolling average, so young players are often underrated a touch. Another issue is the position categories. These are a bit off in my opinion, but I’m gonna stick with what the AFL provides.

Despite these shortcomings, these ratings are undoubtedly the best thing we have right now to rate players by, and we can still gain some good insight about the ways Sydney and the Bulldogs shape up.

I’ll make a few comments on this, but more or less leave it to you to decide which team is favoured most in which areas of the ground. As I discussed yesterday, Sydney’s backline is a freakshow. Sydney have 2 of the top 5 best small/medium defenders in the competition (if you can count Rampe as “medium”) as well as the best key defender on the park this Saturday. Undoubtedly Aliir Aliir and Callum Mills will climb up their respective lists as their careers go on. For me, they are both probably a touch better than where they sit.

The Dogs have a lot of good smalls but are probably undersized. That said, imagine the force they could have been if Easton Wood and Jason Johannisen had stayed fit all year. Not to mention Bob. We’ll certainly be in for a midfield treat. According to the Player Ratings, 4 of the top 8 midfielders in the comp will be taking the field on Saturday. Sydney have an insanely strong core, with 5 mids in the top quarter of the competition. The Dogs also have class all over with possibly a bit more emphasis on mids resting forward. If you chuck Caleb Daniel and Isaac Heeney (who are both classed as small forwards) into their respective midfields, you have a tantalising battle on your hands.

More on this tomorrow. Buddy is undoubtedly the biggest and the best big forward out of these sides. The Dogs, however, probably have the best of the smalls3. Once again, Bulldogs look a bit short here. It’ll be interesting to see if Sydney try to capitalise on this advantage, keeping more ball in the air.

Where do you see advantages? Will the overriding class of Sydney’s champion players (7 players in the top 10 for their respective positions) be too much for the rough and ready Dogs? Let me know, either in the comments or on Twitter @figuringfooty.

Check back tomorrow to see me dissect the midfield battle a little closer.