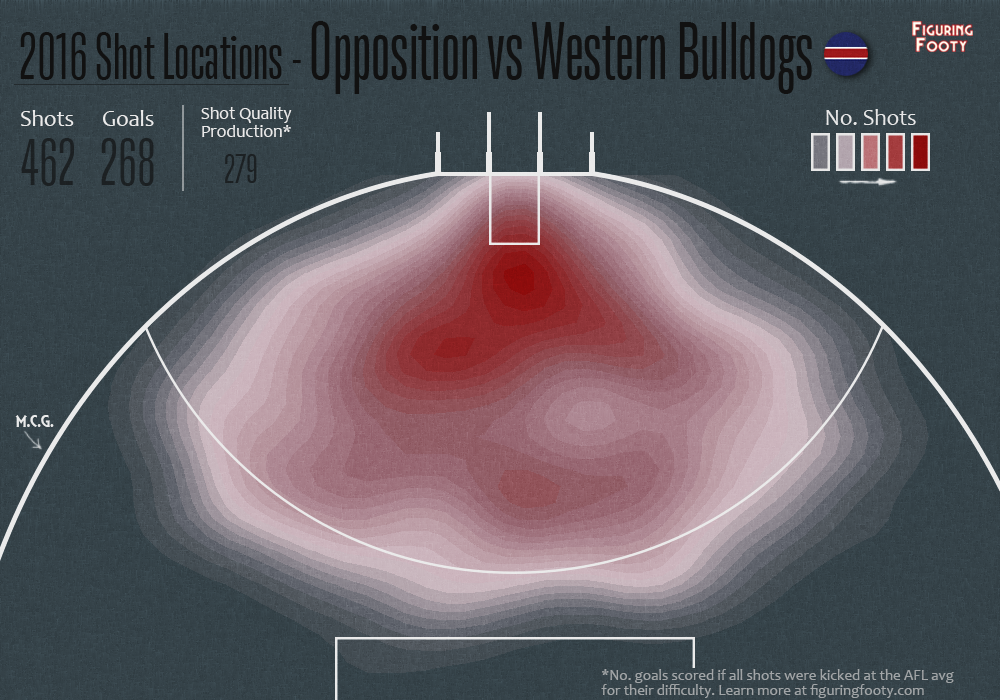 In the lead-up to Saturday’s grand final I’ll be posting a new article each day previewing the big match. These articles will use some of the graphics and tools I’ve introduced over the last month to compare the Swans and Dogs seasons to date and make some observations about where the game may be won and lost.

Today, I retread over some of the areas that Hurling People Now went over last week and see how strong defense may be the key to winning the flag.

A Match-Up Between the Two Best Defenses in the Competition

For anybody who has followed the footy this year, the most immediately obvious similarity between these two sides is that strong defense is a cornerstone of their games. The Swans and Dogs are number 1 and 3 respectively for fewest points conceded per game.1

However, this is not to say that the two play the same style of football. In fact, you could probably find more differences than similarities. One of the clearest indicators of a different style is the amount of inside 50s each team concedes.

The Bulldogs are about where we would expect, more or less tied with Geelong for least amount of inside 50s on average. Sydney are the real team of interest here. Despite being the only side to keep opposition teams to an average of under 70 pts a game this year, the Swans concede the inside 50s of a bottom 8 club.

Now, every inside 50 can result in either one of two things. It can be cleared away from danger2 or it can lead to a shot. It just so happens that the Swans are the best in the league at controlling both of these scenarios to their benefit.

Firstly, Sydney allow shots at a far lower rate per I50 conceded than any other side in the comp:3

Only about 38% of the times the Swans have allowed an inside 50 this year has the opposition managed to get a scoring shot off. This compares very favourably to the Dogs (43.4%) and looks to be in an entirely different league to teams like Brisbane and Gold Coast who actually allow a shot more often than not.

The other element to keeping your opposition’s score low, which Hurling People Now discussed last week, is prevent the simple shots. Sydney are experts in this too. Here’s where opposition shots against the Swans have come from this year: And here is the same map but for the Dogs: And for those new to the blog, here’s the historical accuracy for a set-shot at every scoring location:4 While the Dogs concede slightly fewer shots, those that they do let through are usually from much higher equity areas than the Swans’. Sydney have conceded 8 more scoring shots this season but 28 fewer goals. That’s almost 3 games worth of goals fewer than the second best defensive unit in the comp. Remarkable.

The differences between the two sides can be boiled down to this:

The Western Bulldogs defend from high up the ground. Their skilled young midfield swarm the ball making any possessions hotly contested, while a loose man often hangs off the back, both to set up the spread and prevent any easy ball from getting through to their defensive 50. Hard ball gets and tackling are the keys to this style of play, and anyone who watched the GWS prelim could see that that ball was hard got.

Sydney, on the other hand, use the full length of the field to defend. They have a skilled defensive unit who consistently stand strong under pressure and refuse to get sucked up the ground. The Semi final against the Crows was a great example of this in action. The Swans never fell out of shape and restricted Adelaide to one of their lowest scoring games by preventing the slingshot.

Don’t get me wrong, the backline does not operate in isolation. One of the reasons the Swans are so good at deflecting attack is because their midfield do not afford the opposition midfield the time and space to deliver high quality entries. However the signs that this concession of ground is a deliberate strategy is too overwhelming to write off.

We shouldn’t read too much into one game, but the prelim performances of both of these sides sums up this observation perfectly. Defending from the the front. Lots of hard ball gets around the middle of the ground leaving little work to do in their back 50. Happy to play with the ball in their back half and launch attacks from there. The Cats had 72 inside 50s in the match for only 24 shots. The Swans had it their way, but their way strangely enough is in the back 50.

What Happens in the Grand Final?

Don’t be surprised to see this pattern continue on Saturday. I think the ball will be down the Dogs end a lot. Whether they can force the errors and capitalise on the few chances they do get may well decide the outcome.

In my book it will be a question of whether the young Dog mids can get on top enough to provide quality service to their slightly underpowered forward line. They’ll need all the help they can get.

Check back tomorrow to see more on how the road to the GF has differed for Sydney and the Bulldogs.