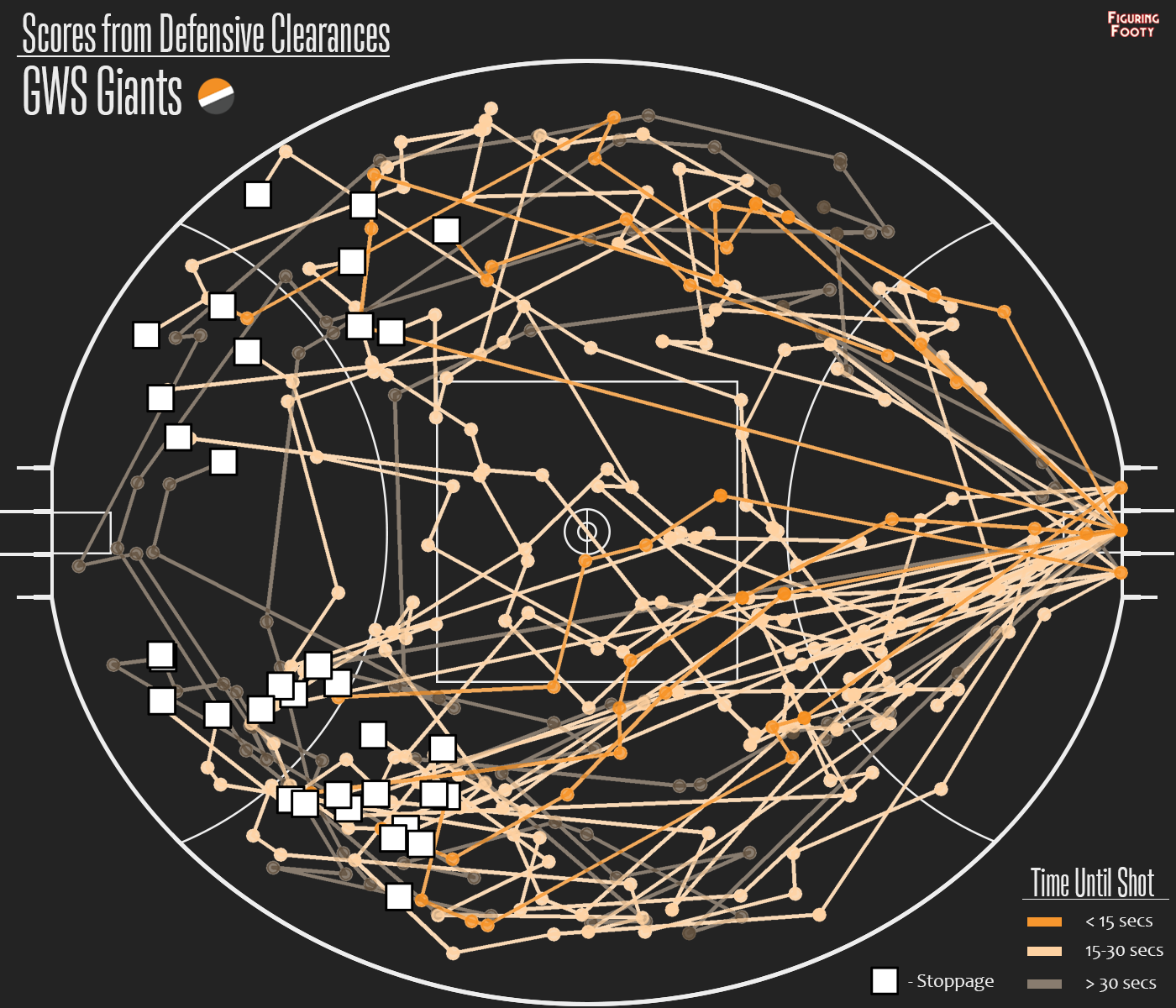 For a change of pace this week, I have handed over the reins of the Figuring Footy stallion (colt?) to some other amateur footy writers. I’m interested to see what insights they can glean about the preliminary finalists using the tools and graphics introduced in my “Fresh Way” series so far.

As footy fans, we can use analytics to understand the strengths and weaknesses of certain teams as well as their different processes toward scoring. Whilst we may instinctively know that, say, the Swans are the best team in the comp at defending ball movement or the Bulldogs are the best contested team in the competition, we don’t really know how and why they are strong in those areas.

Similarly, we may “know” that GWS are the best team in the competition at moving the ball through the midfield, but what does this mean? While the data aren’t perfect, by our figures, the Giants scored 34 goals this season from clearance chains originating in their defensive half. This is three more than the next best team (Sydney) and much higher than the league average of about 23. In other words, a league-average team would kick about one goal a game directly from a defensive clearance win, while GWS kick about a goal and a half.

Half a goal a game may not seem a lot, but this is simply a representation of how much better than the rest of the league they are at moving the ball through the midfield.

How do they move the ball?

Now that we’ve established that GWS are good in this area, we need to look at the how and why. The how can be illustrated in various different ways, such as video analysis (or player tracking from next year) but that’s beyond the scope of this article.

So instead, we’ll use a basic visualisation of the goals that they kick from clearances in the back half and how long it takes them to get a shot off1. There’s plenty more to analyse or discuss, like how many more of the goals seem to originate from the right flank or the extent that the Giants move the ball through the wing or corridor, but instead we’ll look at the involvement of individual players in this type of ball movement.

Are the Giants good because of a deliberate tactical approach, or does it just so happen that the strengths of their players facilitate this type of ball movement?

I think it’s a little bit of both. Leon Cameron is clearly a quality coach, and quality coaches shift their tactics in such a way to take advantage of the strengths of their players.

I’d say that the Giants’ strength lies in a big forward line that doesn’t rely on resting midfielders, a defence that runs and kicks long, and a midfield with great running power and ability.

Cameron probably realises these strengths of his team and has deliberately instructed the midfield to use their running power in space to their advantage. In contrast to other teams, like the Bulldogs who use their superior ground-ball ability to lock the ball in their attacking half or Adelaide who rely on a “slingshot” play after turnovers, the Giants tend to find themselves in situations where they can use this running power.

The strength of midfield link-up play by running into space can best be illustrated by looking at the visualisations of their midfield group individually in these transitions from defensive clearances. The most powerful understanding of this visualisation is to see the impact that Tom Scully has on the Giants’ ball movement. He is absolutely critical in this type of ball movement, getting involved in more score involvements from defensive clearances than any other GWS midfielder.

We can also analyse the positions that he gets himself into when he gets involved. This is usually on the left hand side of the ball, as he’s on the “inside” of right ball movement and on the “outside” of left ball movement – largely because he’s a left footer playing on the left wing.

Lachie Hunter, as a left-footed power-running midfielder, plays an almost identical role on the left wing for the Western Bulldogs, except their style of attack is a lot different.

The Dogs play the most congested style in the league: evidenced by how turnovers in their matches, both from themselves and their opposition, don’t result in a high number of scores.

Crows are the kings of the turnover, but no one covers up their mistakes better than the Swans. #AFLSwansCrows pic.twitter.com/p2xdkOilVW

The Dogs swarm the ball more often, making the opposition’s turnover ball movement less “clean” even to the detriment of their own ball movement.

This is also reflective of the Dogs’ playing list. They have a small forward line with many resting midfielders in the forward line positions – such as Josh Dunkley, Clay Smith, Caleb Daniel and Liam Picken spending plenty of time resting forward – which naturally results in a more pressured forward line involving pressure and scoring from winning ground balls. This contrasts with how the Giants use the running ability of their midfield.

Saturday will certainly be a fine showing of what the future holds for the AFL. Watching whether it will be the free-flowing runners of GWS, or the hard-ball winning young guns of the Dogs that get to play on footy’s biggest stage next week will no doubt make for an intriguing afternoon.