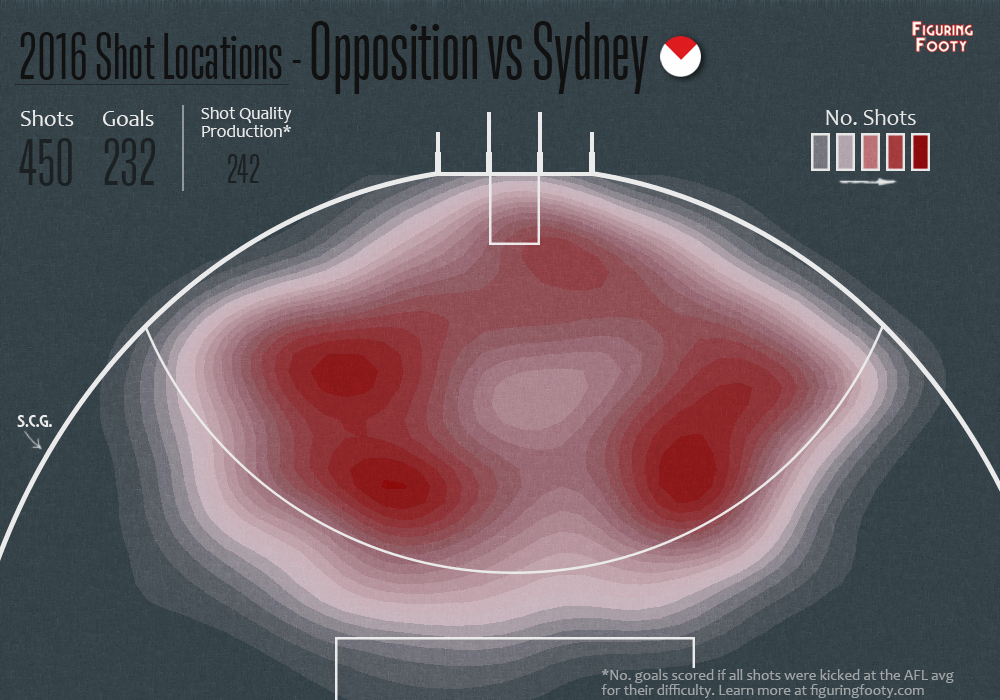 For a change of pace this week, I have handed over the reins of the Figuring Footy stallion (colt?) to other amateur footy writers. I’m interested to see what insights they can glean about the preliminary finalists using some of the tools and graphics introduced in my “Fresh Way” series so far.

First off we have two of my favourite sports writers around, Sean (@arwon) and Cody (@capitalcitycody) who write together at their blog, Hurling People Now.

The Swans Own The Corridor, And There’s Nothing You Can Do About It

From junior footy on, the maxim is to reduce the angle to goal. Sure, kicking a checkside goal might be fun, but that’s a sure way for your coach to give you an earful at quartertime.

When we got given the opportunity to ruin a much better site (THANKS ROB!), we thought about the strength of the Swans defence, and what we’d learnt in junior footy. For the uninitiated, since 2011 the Swans have been consistently entrenched in the league’s top 2 for conceding the most inaccurate scoring shots. With Figuring Footy’s fantastic shot plot and contour maps, we thought we’d try to find a reason why this is so.

Upon first look, it hit us like a ton of inaccurate bricks across a goalface.

For the longest time, due to lack of better data, we’ve assumed that scoring accuracy is down to luck. We’ve even used an assumed regression to the mean in scoring shot luck to help project future season rankings.

We’d therefore consistently guessed that scoring shot luck against the Swans would normalise as it has for most teams over time, but it has not yet came back down. This was an assumption informed by knowledge of other sports such as basketball, but we couldn’t prove it either way in footy because shot difficulty is a complete unknown just based on the basic match stats available in public databases (HI MATT!).

Generally from season to season, teams who concede more inaccurate scoring shots snap hard back towards the mean in the following seasons, but the Swans have avoided the trend:

And we think this chart goes some reason to explaining why: As you can see in the title above, the Swans seemingly go to great lengths to deny the opposition scoring shots in the best possible positions, ie, close to goals and straight in front. Recall that this is the historical accuracy for a set-shot at every scoring location: The “open-play” historical accuracy is even more centrally dominated. Sydney concede most of their shots in traditionally very difficult areas.

Now, let’s compare the Swans to an average team… let’s say the Cats: As you can see, there’s a marked difference to conceded shot location, and to expected goals/SQP. You can see Figuring Footy’s data seems to clearly show a pattern for the Swans here, and that’s to push opponents out to the pockets and further out from goal, where decent chances are harder to come by. In fact, Sydney have conceded 45 more scoring shots this year than Geelong1, and yet have conceded less goals.

What may cause chaos for Geelong on the weekend is the wider pockets of the MCG, and the Cats’ propensity to lead to the pockets:

If Geelong get stuck in the trap of leading into those wider pockets, after being denied space by the Swans, we may see a number of sprayed shots and centring kicks. While we’re here, let’s look at the Swans scoring shot locations: You can see a heavy use of the corridor there, with a little red Franklin curve out to the left, reflecting his idiosyncratic movement patterns as highlighted in this previous Figuring Footy post. The Cats will have to work hard to deny Sydney opportunities from this central zone of the forward 50.

One way that Geelong may be able to gain the upper hand is to body up in the air, and take the hard grabs. Geelong conceded the fewest contested mark scoring shots this year, with their defence super strong against the high ball: As you can see, a smattering of opportunities here and there, but crucially Geelong keep opponents from marking in that high-yield zone near goal. Geelong conceded less than half of the number of scores from contested marks than last-placed Essendon did this year. It’s worth noting that Sydney was also second in this category, which is another factor in their stingy defence.

Up forward, Geelong are equally strong at grabbing contesting marks, and converting them into scores: Without sounding like a broken record, Geelong were second in the league in scoring shots from contested marks as well. Sydney have been a more middling seventh in scoring from contested marks this year. With a smaller forward line dominated by Franklin who doesn’t take a huge amount of hard grabs, this isn’t totally surprising, but worth noting nonetheless.

Geelong’s contested mark scoring shots are dominated by one player: Tom Hawkins. He has clunked 29 this year – Menzel was the next highest on 14. This is where Hawkins has taken them: You’ll notice a striking similarity to the dead zone of the Sydney defensive contour map above, meaning that Sydney tend to keep Hawkins’ marking zone well covered. In the regular season fixture between these sides (won by the Swans by 36 points at Kardinia Park), Hawkins managed 2 goals against the Swans, but only one contested mark.

At the other end of the ground, Swans forwards only managed three contested marks as a side, but were clearly far less hampered by having to find other avenues to goal. Geelong managed 52 inside fifty entries in that round 16 game, but only 15 scoring shots. Sydney on the other hand managed 23 scoring shots from just 40 scoring entries.

If Sydney can deny Geelong shots on goal this well again, it will be nigh impossible for the Cats to advance to the Grand Final regardless of whether they again generate more inside-50s and regardless of how well they cover off Sydney’s own forward 50 marking.

Conversely, if Geelong’s forwards can dominate in the air as they have throughout most of the year, or find other avenues to goal, Sydney will have a slightly longer offseason than they’d be hoping for.