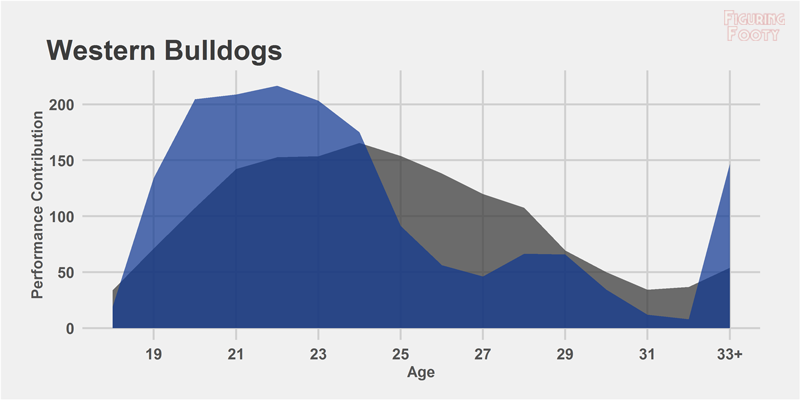 These articles are framed as an “analytical preview of teams before each final”, but in reality I will be using them as a way to introduce some new concepts, visualisations and ideas about the general direction in which I think good footy discussion should be moving.

I wrote last week about how I didn’t think Hawthorn were a 17-5 side, and that their record in close games flattered them somewhat.

On Friday night, as if the statistical gods were listening to me, this record got reverted to the mean in probably the harshest way possible. A missed shot after the siren.

It should be noted that after getting himself into this position, Isaac Smith was actually “unlucky” to miss. In an alternate universe I would have spent the week fielding accusations about how “stats just don’t *get* football”. It’s just nice that to see the coin come up tails sometimes so you can be sure you’re actually playing with a fair coin.

Isaac Smith's shot after the siren had a 58% of going through according to my model. #AFLCatsHawks pic.twitter.com/MrBvFN6IIG

Now. Knowing that Hawthorn have slipped from the great1 heights they once were at, I wanted to find a way to visualise this information. A way to show what is happening and a reason why.

One of the more logical explanations to why the Hawks are slipping2 is that their good players are simply getting old.

Luckily for me, I developed a new way of looking at team age distributions last week. Here’s a look at how Hawthorn have been affected by the “wheel of time”.

The side that lost to Geelong last week was the oldest Hawks side to play an important final since at least 2007. The Hawks have a lot of important players towards the end of their career and only 4 under 25.

In the 2007 Prelim, Sam Mitchell was 24, Luke Hodge was 23 and Jordan Lewis was 21. You can watch their glittering careers play out in this animation as they move through their “peak years” with lots of finals football and lots of success.

As of today, those three are 33, 32, and 30 respectively. Do Hawthorn still put too much stock in these three?

This game really is a battle of old against young. I posted the Bulldog’s age distribution last week, and from this you can really tell what a youthful side the Dogs are: What you can’t tell is the contribution of each of those players. The best players on the field in their big win over West Coast were 24 year old Tom Liberatore, and 20 year old Caleb Daniel. A clear sign of their youthful dominance was Marcus Bontempelli being awarded the captain-ship of the “best 22 under 22” side, a team he will still be eligible to make for the next two years!

In order to get a better idea of who was pulling the weight at the Dogs, I looked at the AFL Fantasy Ratings3 of each player over the 23 rounds of the regular season and calculated how many points (on average per game) players of a certain age contribute to the side. The Bulldogs have had 2 players aged 18 play a total of 7 games this season (6 for Bailey Williams and 1 for Kieran Collins). Averaged over the 22 game season, 18 year olds have produced a little under 20 Fantasy points a game for the Dogs compared to the competition average which is about 38 points a game. The Bulldogs have had less production from 18 year olds than the AFL average.

Now, look at players in the age range 19 to 23. The Bulldogs are getting value of almost 1000 Fantasy points a game from this lot compared to the AFL average of around 600. It’s this 19-23 group that are winning games for the Bulldogs.

This way of understanding age contributions isn’t perfect. I fix ages to what they were at the start of the season, rather than updating for each game. I use a smoothing algorithm that gives dodgy results sometimes. On top of this, Fantasy points are far from perfect, routinely undervaluing the contribution of some positions compared to others and failing to account for important aspects of the game.

Regardless, I still think visualising team age profiles this way gives us something very important. We can see that the Bulldog’s are driven far more by young players and a couple old players than the AFL average team.

Bringing the discussion back to the game at hand, let’s see how Hawthorn look: Unsurprisingly the Hawks have been driven by the older brigade this year. These older players may be able to get results now, but all signs point to the Hawthorn dynasty fading rapidly.

Before I finish, have a look at the other side touted as young stars of the future, GWS: You can see that their distribution is far more centralised around players aged 22. This age includes players like Toby Greene, Stephen Coniglio, Jeremy Cameron, Jonathan Patton and a handful of other stars. They also have that second bump around the 29-30 year olds, the traded players. These guys probably still have a couple of years left in them. If anybody wasn’t aware before, GWS are going to be very good.

A prelim battle between future champion sides is what we have waiting for us if the Dogs get up over the Hawks, but I dare say that old Hawthorn will put in a fair fight on Friday night to stop that from happening.