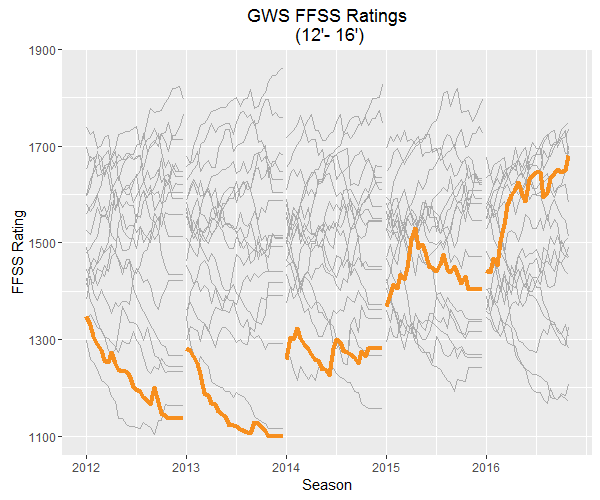 In my Coleman Medal article from a couple of weeks back I made comment about how one sided Buddy Franklin’s ShotPlot has been this season. For those that haven’t seen it, this is what I’m talking about: He seems to overwhelmingly favour the left side of goal, short leading almost exclusively into that pocket, and taking more shots from the area 50m out on the boundary that he has had so much success in the past with than  from pretty much anywhere else.

During some discussion with a few friends, the idea that the other Sydney forwards may intentionally lead away from this side in order to create space for Buddy was floated. In order to test whether this may be the case, I had a look at the shot output of every other player in the Swans line-up to average at least a goal a game this year1. From a quick look we can see that these other Sydney forwards don’t seem to favour the right side any more than we would expect. In fact, if anything they also seem to get more shots from the left of goal.

This suggests that Sydney, consciously or otherwise, deliver the ball more often than not to the left of goal. Whether this follows possession chains down the left hand side of the field, or “cutbacks” from movement down the right is something that could be explored in more detail later.

The group of 62 kicked a total of 111 goals this season from a combined 84 matches. Buddy kicked 74 himself from only 22. This lends evidence to the enduring narrative that Sydney are “Buddy-centric”.

Whether this itself is a bad thing is up for debate, but it does seem that stopping Buddy goes a huge way to stopping Sydney. I wouldn’t be surprised if we saw a Heath Shaw type character play large chunks of the game filling that hole in front of Buddy at the left side of goal, effectively stopping him from leading hard at the ball into his favourite area.

This match will be the Giant’s first ever final and undoubtedly the biggest match played in the club’s short 5 year history. They have come on in leaps and bounds over this time. Good player development, quality coaching, and yes, a heap of AFL concessions have seen GWS climb from one of the most laughably poor sides in VFL/AFL history to one in with a genuine chance of the premiership flag.

Regular readers of this blog will know that I maintain a team rating system which I dub the Figuring Footy Scoring Shots (FFSS) system. This rating system attempts to put a number to every side in the competition by looking at the results in matches, factoring in opposition quality, any home ground advantage, game margin and the Scoring Shot Production of both sides.

Let’s have a look at how FFSS has seen the first 5 years of the Giants: 1500 ratings points signifies a bang-on-average team. You can see from this graph, that it wasn’t until last season that the Giants were first considered “average”.

In their first two years, FFSS initially rated GWS very poorly, not really knowing what to expect. The Giants proved to be much much worse than this initial estimate, getting beaten by 100+ points regularly and finishing both seasons rated dead last. If it weren’t for Gold Coast they would have been in a league of their own.

In 2014 they remained a bit more steady. Just bad, no longer catastrophic.

The start of 2015 saw a completely changed Giants. They quickly challenged FFSS’ initially low rating and proved that they could mix it with some of the best sides in the league. Unfortunately a few key injuries, including Mumford, exposed a raw underbelly and the Giants quickly fell back down to earth.

2016 has been a clear step up in class again. They’ve been hovering around the 1600 mark for most of the season. The only time they were under this for any extended period was at the start of the season, when FFSS was not yet sure if their performances were indicative of a new normal, or just a few lucky wins to start the season (similar to the way Gold Coast went this year).

In recent weeks they have continued to raise their game and now mix it with the best 5 teams in the comp. A top four spot will be a big boon to their hopes of a maiden grand final. I’ll certainly be watching to see how their player’s fare on the biggest stage they’ve experienced on Saturday arvo.