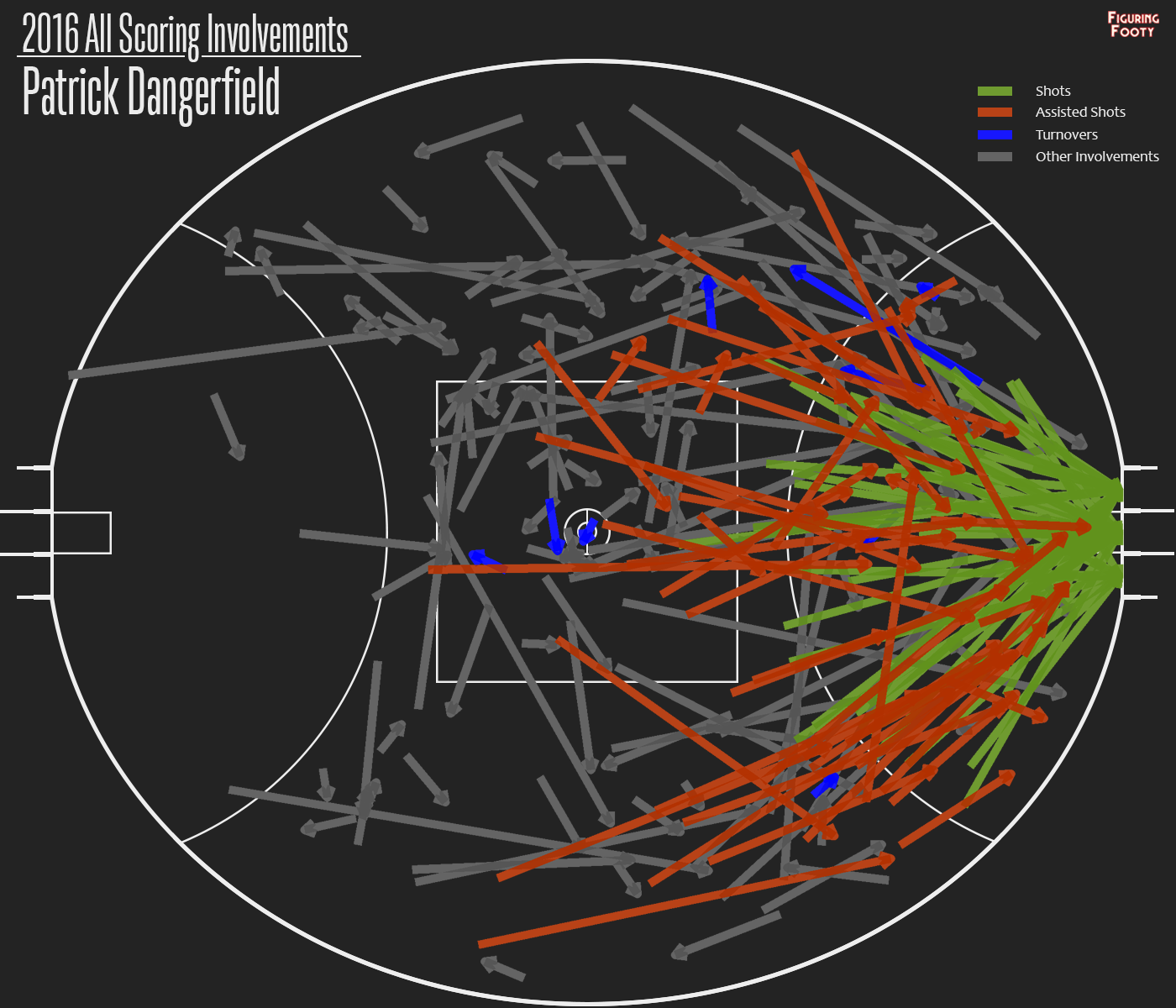 One of the few “secret sauce” statistics the AFL makes publicly available through their app is the number of “Score Involvements” for each player. A score involvement, as far as I can tell, is simply registered as player having touched the ball and contributed to the possession chain at some stage in the lead-up to a score. Here’s how the 2016 season totals look: Once we strip out the specialist forwards, we’re left with only two guys. The highest ranked of these being the almost unbackable Brownlow favourite, Patrick Dangerfield.

I wanted to get an idea of where on the field Danger has done most of his work so I developed the following visualisation: Each one of these lines represents a score involvement, starting from where he disposed of the ball and finishing where the next player took possession2. You can think of these lines as the paths of any kicks/handballs/knock-ons Dangerfield made which eventually lead to a goal. The colours represent whether the disposal resulted in a score for himself, a score for the player to receive the ball, or a score for the opposition from a turnover.

Now, I admit that’s a lot of lines. But let’s go through this and see what we can learn:

Whether any of this provides us any insight into how Hawthorn can stop Dangerfield on Friday night is up for debate. But you’d have to think that if he gets around his average of 8.7 score involvements a game, Geelong will be hard to beat.

There was a very interesting tweet yesterday that caught my attention:

If the AFL ladder was based on Champion Data's expected score. Few interesting changes: pic.twitter.com/c41GQsy2hb

This is how the ladder would look if every result had gone by who created the highest quality chances in the match. Champion Data call this the “Expected Score”, but the concept is identical to my “Shot Quality Production”.3

What we can see is that Hawthorn won an extra 4 games in which they had not in fact created the better chances. These wins have been due to a combination of straight-kicking on their part (which is inherently luck based), and poor kicking kicking by their opponents. We could make the argument that this is what makes Hawthorn a “great team”, but it would be a stretch to say they are so great that they can put off an opponent kicking for goal from the same spot on the pitch better than any other side. It’s very likely that luck got them at least some of these extra wins.

Hawthorn have also won the 6 games this year that they were within a kick of losing just seconds before the siren. The narrative seems to have emerged that Hawthorn just find a way to win the tight ones. But it seems more likely to me that a huge dose of luck went into Sam Mitchell swinging his boot out of the ruck to go 50m downfield into Gunston’s hands against Sydney in RD17, or even Jack Fitzpatrick getting space and a kind bounce to kick a goal from the centre-square last week again Collingwood.

The research into this backs me up.

I’m not saying Hawthorn are not a good side, I’m just saying that on the balance of probability, they are lucky not to be over in Perth playing an elimination final tonight.

Good luck hearing anybody make that argument amongst the cries of “Fourthorn”!