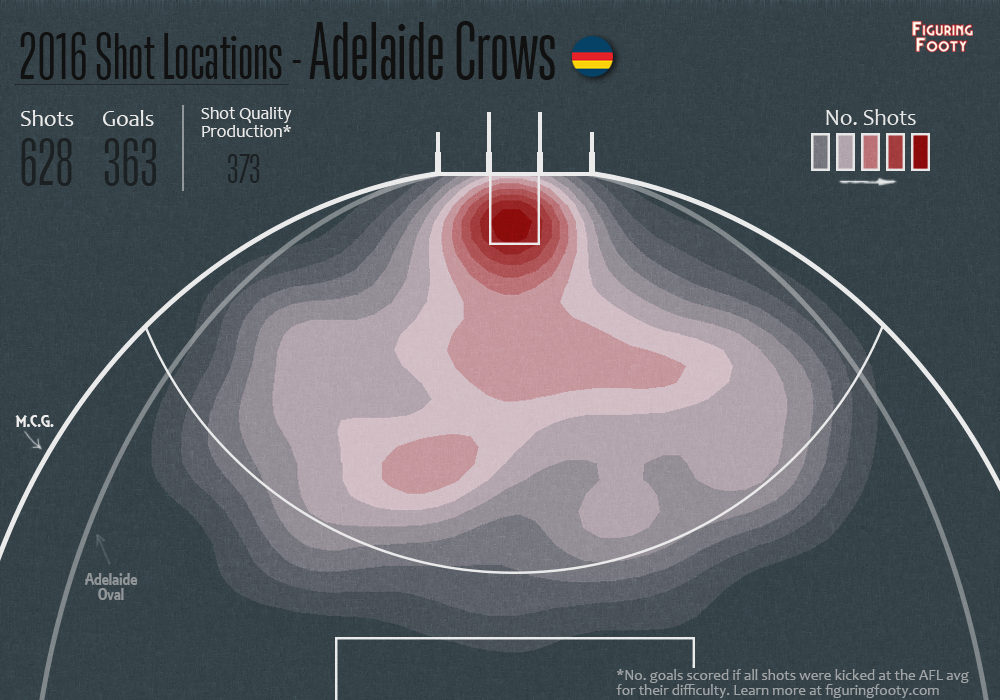 A Fresh Way to Think About Footy – Adelaide v North Some new tools for footy analysis.

Each article will have something you haven’t seen before, patched together from rough work I have been doing over the last few months. Hopefully you can see the wide-reaching applications for some of this stuff as well as learning a thing or two about the AFL finalists.

It’s been a well accepted “fact” for a few months now that Adelaide have the best forward line in the competition. But what exactly do we mean by “best”? Do we mean that they have the straightest kickers? Is it their even spread of talented talls and smalls? They’ve clearly kicked the most points, but how many of those can be attributed to their midfield or long-kicking half-back line? Maybe they just have the tactical game-plan best suited to opening up space in the forward line?

To help get a better idea about what makes the Crows forwards so lethal, I wanted to take a closer look at just where they are kicking all these goals from. To do that, I need to compare them to some other sides. Firstly, a club that has finished even higher up the ladder, Geelong. This is a heat-map of the position of all of Geelong’s scoring shots this season. We can see that the Cats have good shot production at the top of the square and radiating out about 20m from that spot. They also take quite a few shots from around 45m out at a 45° angle either side of goal.

Next, let’s look at the side with the worst forward line production in the comp, Essendon, and see where they took the bulk of their shots from. We can see the similarities to Geelong, in that the Bombers also favour hitting from the right side of the goal. However, we see far lower shot production in the “high value” area 25m out, directly in front, and much more in those “low value” areas in the pockets and out near the 50m line. Essendon are a bad team first and foremost because they create few and low quality chances.

Now that we’ve got an idea of how some other teams far, let’s have a look at Adelaide’s heat-map. The Crows look unlike any other team in the comp. They take most of their shots in and around the goal-square. Is this their forwards’ doing or a result of a unique tactical game plan? It’s hard to say, but very likely the answer is, both.

You can see from the text in that image that they kicked 10 fewer goals than their SQP would have had them at. This means they are not a particularly “straight” kicking side. However they get great value from each shot that they do take. This is probably due to their “sling-shot” game plan which sees the Crows force turnover’s inside defensive 50 and then, with the aid of a few long-kickers and hard runners, quickly find space in a vacant forward 50.

Whether this particular game plan has been “found out” remains to be seen. But Geelong, and more recently West Coast, have had success in blocking up that defensive 50 and forcing congestion. Can the Kangas do the same on Saturday night? It should be interesting to find out.

Much has been made of North’s bizarre decision to axe 4 of their better and most beloved players just before a finals campaign. I won’t get too much into whether that was or wasn’t the correct decision, but it does bring the important idea of team “age profiles” into the public light.

Aging is a very delicate and complicated topic. Performance doesn’t seem to vary with age directly, but rather age as a function of “experience”. Aging is also very unique to the individual. Some peak early on and have a dramatic drop-off, while others seem to be enduring. It varies by position, injury history, conditioning, as well as due to particular vices in the player’s outside life. Even if we knew everything about a player, we still wouldn’t be able to model when they will start to drop off the pace perfectly.

That being said, as a general rule of thumb, most AFL players seem to hit their peak sometime between 22 and 28 years old. This is the sweet-spot where they have had enough time to develop their bodies and train their mind to the game, but before we see the signs of wear and tear.1

With that in mind, I’m going to introduce a new way of visualising a club’s age profile. It’s a radial graph (inspired here), but don’t let that turn you off, it’s not at all complicated. It simply looks at the 22 to play last week and counts how many of them were each age. Let’s look at premiership favourites Sydney to get a better idea. Sydney have a great combination of good young players coming into their peak, and slightly older legends that are still providing plenty of value. Let’s compare this to another top-8 side, the Western Bulldogs. The Bulldogs have a very young side full of talent that is still most likely developing. They also have a few older players, however, crucially, most of these older guys are not being relied on to win but rather playing bit roles in the twilight of their careers. The future looks strong for the Dogs.

Now let’s take a look at the North side to face-up against the Giants last week. On the face of it, there looks like there still is some youth in there. The worries begin to start when you have a look at the names in that 23 and under group. Luke McDonald, Trent Dumont, Jed Anderson, Shaun Atley and Ben Brown. As an outsider2, Brown is the only one of these that I could see possibly getting a game at another top-8 club.

I think this explains North’s decision better than anything else. Sure you have to worry about letting club heroes go, but North can’t really risk letting the club be driven by aging talent any longer. It’s absolutely necessary to clear out some space on the list to let young players develop. Expect them to drop off the pace a fair bit over the next few years while they do this.

Whether they can give the departing players one extra week will no doubt be one of the narratives hotly discussed on Saturday night.