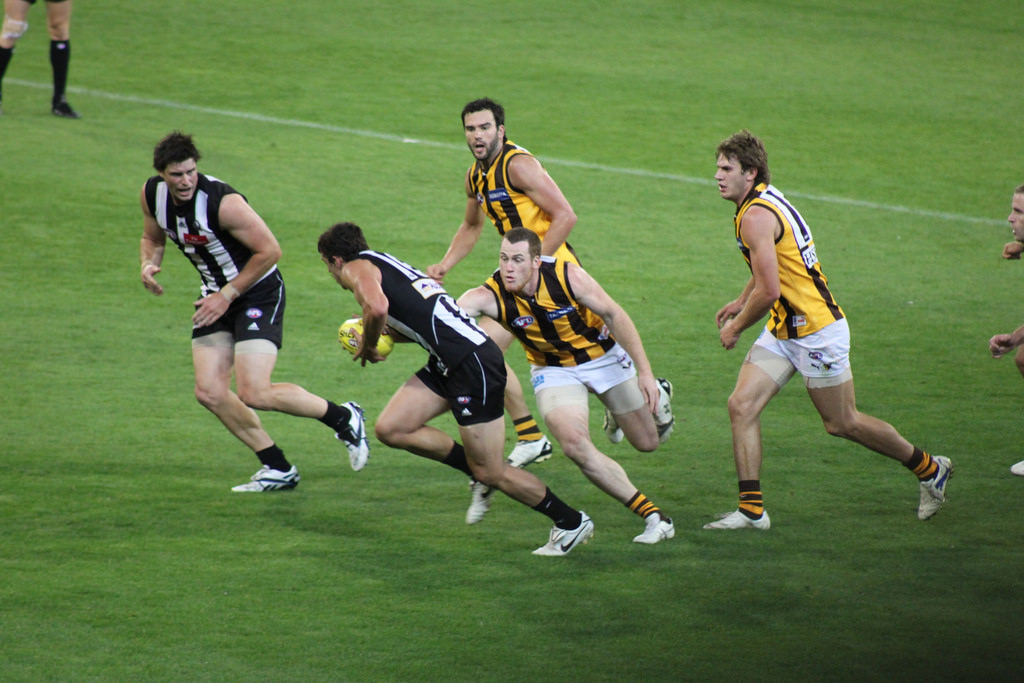 Posted in Analytics Landscape, and Opinion

This is a follow-up article to one I wrote last week about the state of analytics at AFL clubs. That article has been my most successful to date and stirred up interest from corners of the web that wouldn’t usually read an “AFL Analytics Blog”. Today I’m going to step out from the club rooms and have a look at how footy data is used in the one area which makes the AFL a half billion dollar a year business, media and fan engagement.

I had initially planned this to be a whinge piece about the lack of data availability and the reluctance from the AFL to follow the lead of other big global sports in opening up data to it’s fans. I’ve since realised that it would be better to use this opportunity to highlight some of the great work that is being done despite this. Apologies if this becomes a bit of a link farm, there’s a lot of stuff I’d like to share. 1

As I wrote last week, the analytics culture inside clubs and that among fans and the media is very tightly related. “Analytics” is not so much a magic formula you can apply, but rather an openness of mind that allows you to recognise new ideas and not just rely on “gut feel” or whatever “seems” right in a particular situation.

When fans think more critically about player and team performances rather than just regurgitating old cliches (i.e. “we’re creating some good chances up the corridor and dominating play” vs. “I could kick that, these guys are hopeless”) clubs are also forced to update their thinking. Similarly, if intricate tactics and set plays become part of footy, then the media will report on it and fans will eventually update their own thinking to engage with the game on a different level. They’re two the sides of the same coin.

This process of change has happened many times before. Try watching a game of footy any older than about 10 years, beyond the nostalgia kick you probably won’t get much entertainment from it. The game has moved on and we now engage on a different level.

Bombing it long up the guts is no longer the fix all solution it once was.

If you take a quick look at other sports, a lot of the bigger changes to the way the sport is played have come from outside the industry. Fans and writers have discovered new ways to think about the game and this has later been appropriated by teams. If AFL clubs are still struggling to set up “in-house” analytics, why aren’t fans and the media pushing the game forward?

Why Isn’t The Quality of Analysis Better?

1. Footy Media Doesn’t Know How to Use Stats and this Turns People Off

As a general rule of thumb, most footy media is delivered by ex-players (who are picked for their past playing performance above much else) and targeted to the general public. It’s perhaps no surprise then that the statistical insight is often sorely lacking.

If David King is your only stats expert, your industry probably needs some new blood.

Most of the common statistics you hear spurted each week (contested possessions, hit-outs, tackles, centre clearances) actually have very weak correlations to team success. Despite what you hear on Channel 7, winning a bunch of centre clearances doesn’t necessarily mean you are playing well.

Beyond the efficacy of the stats, it’s the way the they are used that troubles me the most. My eyes glaze over when I see a post match report that reads something like this:

Player X had 32 possessions, 17 of them contested, had a positive kick-to-handball ratio, and laid a game high 8 tackles but was beaten for best on ground by Player Y who had 36 disposals, including 33 effective, for a total of 383 metres gained and should win the 3 votes.

Statistics should help us tell a story of a match, not replace the story. Seeing a wall of numbers just distracts us and makes us lose track of what the original point was. In this case, that Player X saw a lot of the ball and was a strong tackler, but Player Y had a bigger influence on the game.

Our brains are particularly bad at processing numbers on a page, but remarkably good at picking up patterns in an image. This is why I spend so much time working on data visualisation, it can help me tell the story I want without losing my audience immediately.

Hawks failed to create a single chance within 25m of goal. No high quality chances at all. #AFLEaglesHawks pic.twitter.com/fC0Nmue9sr

There are some good moves in the right direction by the AFL themselves, but there are still far too many journalists and commentators dryly listing off numbers. This not only bores the audience but gives the impression that this is all that “analytics” can offer.

In order to do any sort of quantitative analysis, you first need rich, accurate data. When it comes to the AFL, rights to any match scores and statistics are exclusively held by Champion Data, a company owned 49% by the AFL itself.

Champion Data goes to great effort in hand collecting detailed data on each and every event that occurs in a match.2 They then make money by selling a watered down version of these data to clubs and the media who are obliged to buy it in order to remain competitive. As CD don’t want these high value customers finding any other way of getting the data without paying the fee, they don’t offer any subscription model for individuals who would like to do their own analysis.

This unfortunately means that the general public are usually left with nothing but basic “counting” stats (number of possessions, disposals, kicks, handballs etc.). There are many good analysts using this simple data to write about clubs, matches, trends, and the fundamentals of the game. There are also a whole slew that use basic stats and scores to rate teams and predict matches. Then there’s also Hurling People Now who do all of the above and more in their weekly round previews which quite frankly shouldn’t have an implicit one week expiry date attached to them. The survival analysis stuff hidden away in the “Round 20” could be the basis for a thesis.

However, despite the best efforts of these “fanalysts”, it often feels like you are trying to cook a feast out of food scraps, or paint a masterpiece with the dried up chunks of paint on somebody else’s paint pallete. The tools you need for high quality analysis just aren’t there.

The most disappointing thing is that it doesn’t have to be like this. Sports like baseball, basketball, hockey and many others have opened up their data in recent years. Amateur analytics communities have popped up around each of these sports and the sports themselves have seen nothing but growth.

The problem, as I alluded to above, is the AFL don’t own their data outright, and the private company that does has no incentive to release any of it. The contracts that are in place also prevent any other company collecting their own footy data and pushing analysis forward in that way.

For now, us “fanalysts” will have to make do with the data we have. Although, I’m confident there are still lots of new insights that can be made. The only way I can see this situation changing in the future is with weight of numbers. This involves letting the AFL know that people want to see smart, educated analysis and the game of footy move forward.

What you can do to help is read, follow and share any of the writers and analysts I linked to above and any work you find interesting. Hopefully before long the AFL will at least recognise that the demand exists. That’s the first step to improving the quality of footy analysis and discussion in all forms.