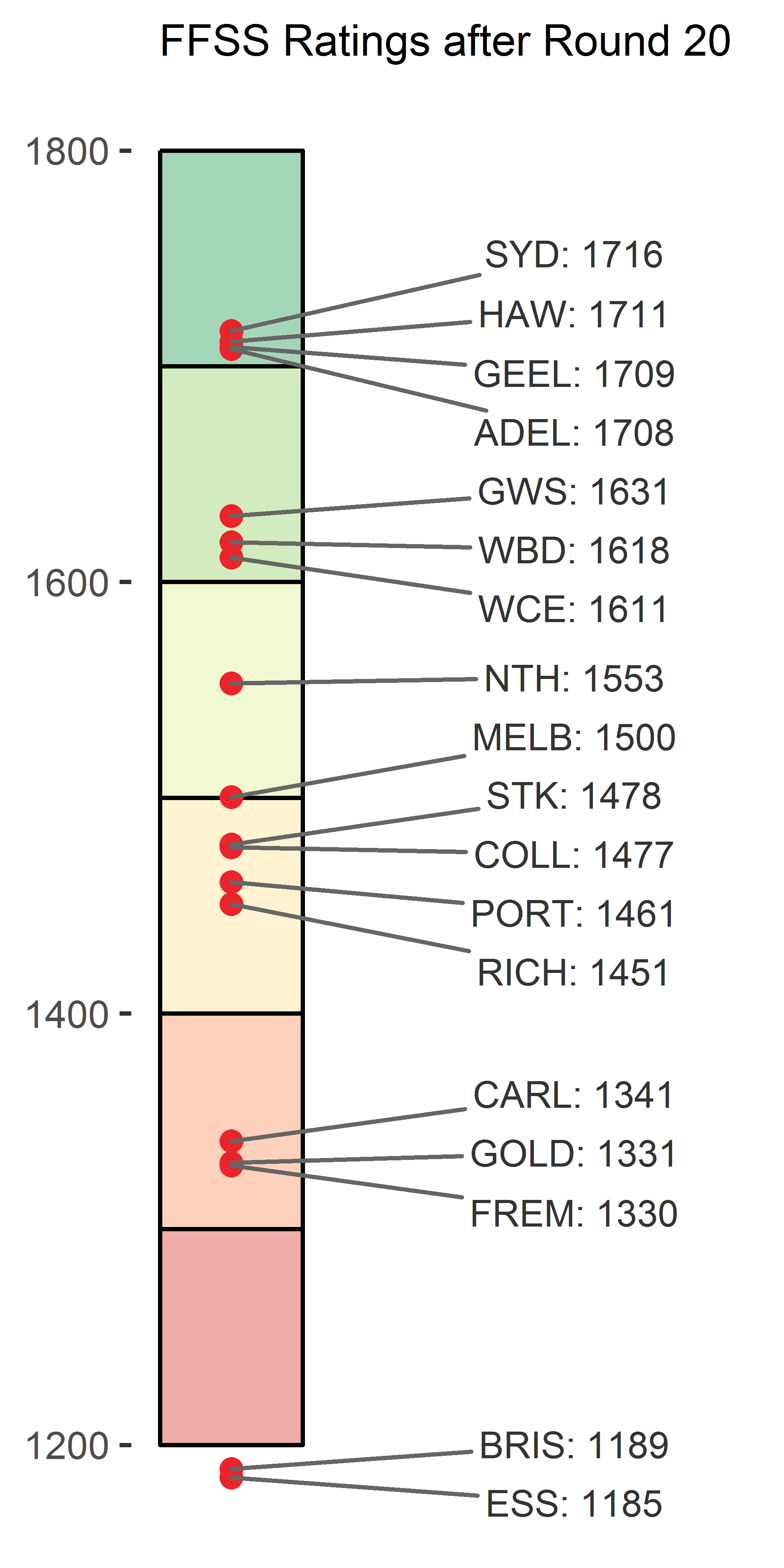 Courtesy of last second Nic Natanui goal at Spotless Stadium on Saturday, there is a game between the top-4 on the ladder and 5th for the first time in a very long while.

Being a home game against a team as shaky on the road as West Coast, the FFSS predictive model had GWS as pretty clear favourites in this one. This means FFSS has revised it’s rating of the Giants downwards, and a bit of a gap has opened up between the top-4 rated teams and the rest of the 8 as well.

The top-4 itself is still tough to seperate. If you were to have sat down and watched each of these teams over the last few weeks, you would probably come to the same conclusion that a lot of others in the media have. That is, that Sydney and Adelaide are just a touch of class above Hawthorn and Geelong.

The FFSS model of course isn’t able to “watch” a game quite in the same way that you or I would. For example it doesn’t know that Geelong escaped an embarrassing loss by the skin of their teeth. It sees a team that created many more opportunities than their opposition and ended up winning, but perhaps not by as much as they would have another day had they kicked a bit straighter.

Geelong missed out on a percentage boost but will certainly be happy to have got out of jail. #AFLTigersCats pic.twitter.com/qPMmUs7ZKN

It also doesn’t know that Hawthorn only managed to kick 3 goals in over an hour of football, looked very ordinary after the first quarter and almost got chased down. It just sees a fairly comfortable win against a top-8 side.

On the other side of the coin, FFSS is also unable to see how slick Adelaide have looked transitioning the ball from defence to deep in attack over the last three weeks. All it sees is a top side beating up on the bottom 3 clubs after their season’s have already been declared over.

As FFSS rates it, there is very little, if anything to differentiate the top-4 sides in terms of ability coming into the last couple of weeks of the regular season. A ratings difference of 8pts translates to about a 51% chance of the higher rated team winning a game at a neural venue. For comparison, interstate home ground advantage is usually worth about 100pts.

Down the other end of the ladder, Brisbane and Essendon haven’t risen up the ratings ladder quite as much as you may have expected. This is primarily due to the fact that their wins were against teams already out of the finals race and possibly thinking more about next year.

Elsewhere, Melbourne are now rated a bang-on-average team with their rating of 1500. This makes them worthy of a 9th place finish. However, as we know, North have a tough run home, so the Dees still hold a very real chance of sneaking into the 8.