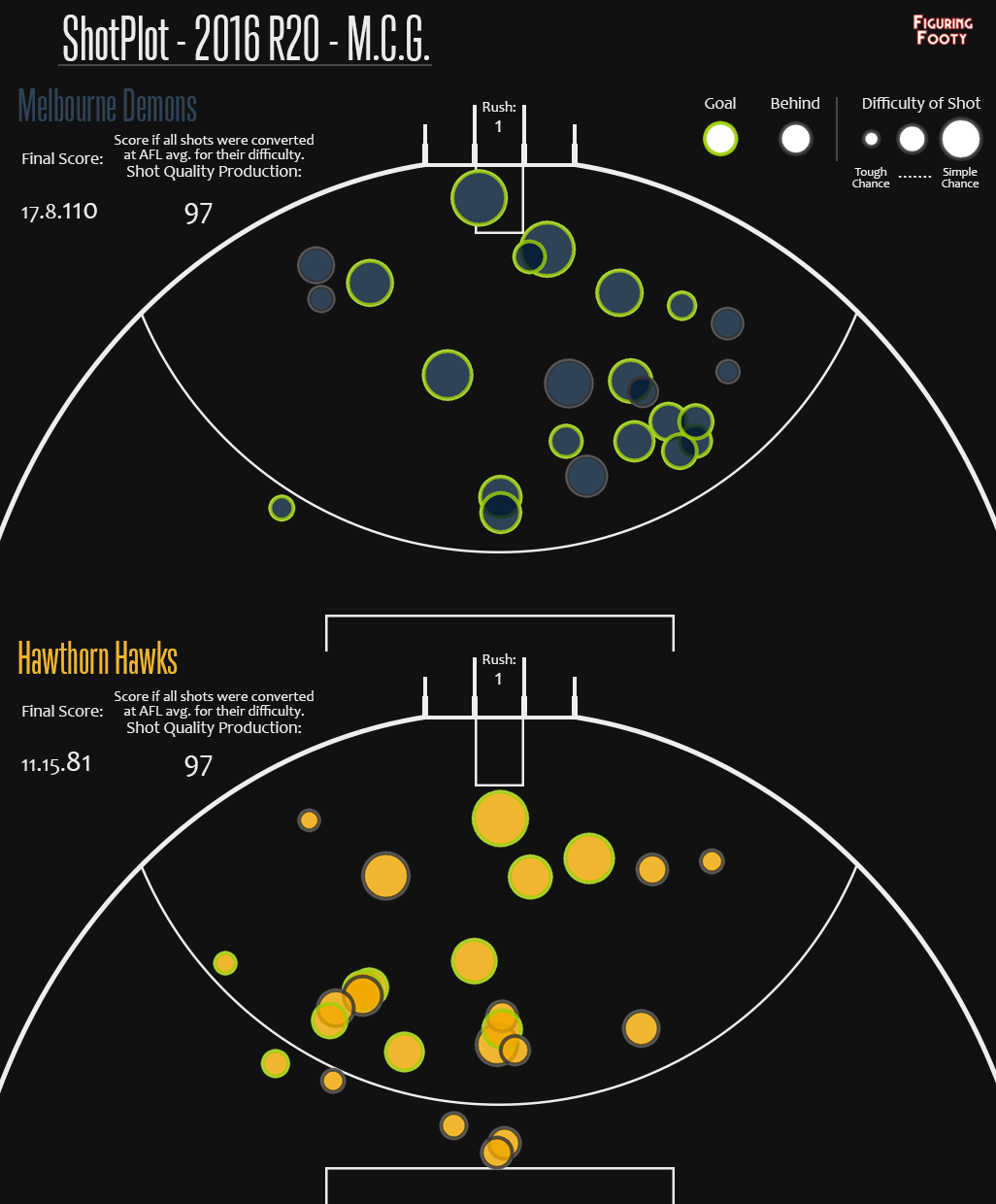 Last week I introduced a model which can be used to calculate the true quality of any scoring shot taken during a match. This basically quantifies the way we already think about footy. A shot, close to goal, on a good angle and with very little pressure1 is a great chance. In tight games these chances are few and far between, if you want to win a match you need to take your chances.

Knowing the quality of every shot taken by both teams gives us a wonderful tool to analyse and review matches. Was the game particularly one sided? Who created the better chances? Which shots were the most crucial? Did one team throw away the win with poor finishing?

Today I’m going to give you a glimpse at a couple of ways Shot Quality can be used to tell the story of a game. And what better way to introduce these new tools then to review and analyse a match from the weekend just gone, Melbourne’s stirring win over Hawthorn at the MCG. I’ve dubbed the graphic above the “ShotPlot” of the match. In it you can see every scoring shot made by both teams throughout the match, Melbourne in blue, Hawthorn in gold. A green outline indicates a goal was kicked with that shot. The size of each circle represents the quality of the shot. Bigger circles are better quality shots. So, for example, Christian Petracca picking up a turnover and waltzing into an open square…

…is considered a much better chance than Jack Gunston’s under pressure snap across the body from in the pocket.

What we can see from the ShotPlot is that both teams restricted their opponents from creating many high quality chances throughout the game, with territory inside the corridor and close to goal tightly fought. The big difference we can see between the teams is their conversion rates from 40m+ out.

Melbourne kicked 8 goals from the 10 chances they had from further than 40m out. The Hawks on the other hand created 16 of these chances but only converted 6 of them into goals.

What this tells us is that Melbourne did very well to capitalise and convert the chances that they created whereas Hawthorn were rather wasteful up front.

If both teams had kicked closer to the long-term league average, we could have had a much much tighter game. In fact, if we were to simulate each of the 49 shots taken over the 4 quarters many times, we see that slightly more often than not, Hawthorn actually win this match. This is primarily due to the fact they created one extra shot compared to Melbourne. This extra chance of a goal slightly outweighs the fact that the Dees created on average higher quality chances. So now we know what kind of shots each team created, what’s missing is when the chance occurred and what effect this had on the game. The ScoreWorm shows the progression of the margin over the course of the game. This is likely a familiar concept to footy fans. The AFL publish their own worms and there are many others available including these great interactive ones from fellow footy analyst InsightLane. The worm I have here however contains one major difference.

Along with the thick black line that shows fluctuations in the game margin, I have also included a red line that shows the ongoing Shot Quality Production difference between the two teams. By comparing these two lines we can see the different moments of the game where a team managed to kick particularly straight or particularly poorly and how these moments may have effected the result of the match.

Take a look at the ScoreWorm from the 5th minute of the 2nd quarter through to about the 25th minute. In this period of time, Hawthorn had 6 shots on goal but only managed to convert 1 of them. Most of these misses were fairly routine shots from experienced players such as these two set shot misses from Burgoyne and Rioli.

In the same period of time, Melbourne only took 3 shots but Weiderman, Brayshaw and Watts each converted these shots to majors.

Later on in the match Melbourne kicked 5 goals straight in order to storm home and turn a 1 point deficit into a healthy win. Once again you can see some separation between the black and red lines here meaning the Dees kicked above expectation by finishing all 5.

If Hawthorn had converted a bit better earlier on, the Melbourne wouldn’t have been able to kick away like they did3. In fact, looking at the red Shot Quality Production line, you can see that on another day, Max Gawn’s shot after the siren could well have been a kick to decide the game.

None of this is to say Melbourne did not deserve the win, they played well, prevented Hawthorn from scoring easy goals and managed to convert their own chances very well. 29 points is probably not a fair representation of their dominance, but they certainly hung in their and gave themselves every chance of winning against the top team on the ladder.

These graphics are certainly not the only ways that scoring shot data can help us visualise and better understand a match. Although I am excited by this and think this kind of analysis opens up a whole new world of possibilities when it comes to discussing footy.

I hope to spend more time digging into SQP and I plan to write regular analysis/reviews if they seem to be well received. If you have any ideas or comments4, let me know here or follow me on Twitter.