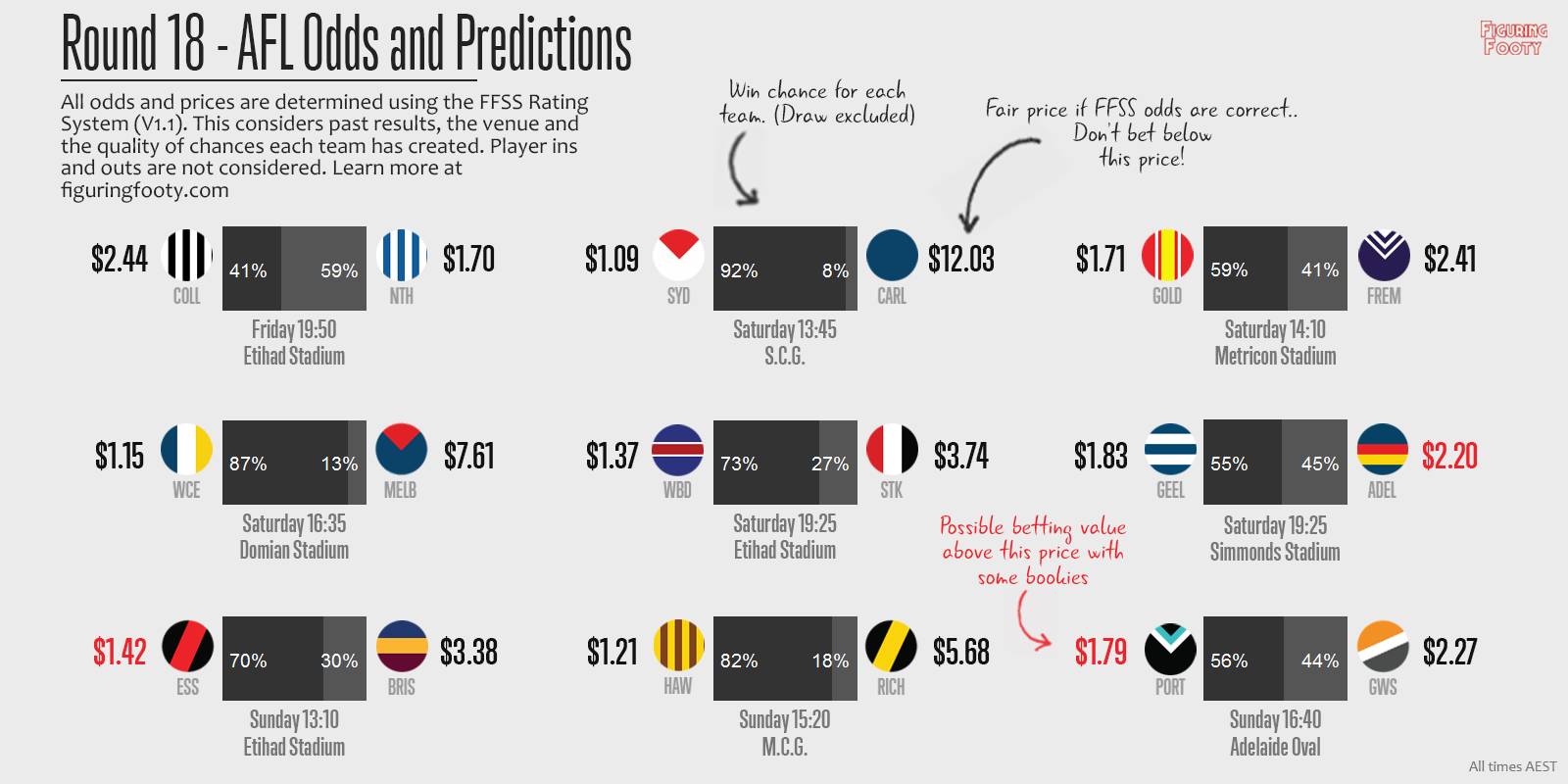 Market odds this week are remarkably well calibrated with the FFSS model. Writing this on Thursday, before any team selection news, 6 of the 9 games are priced just about exactly where we would expect them to be given the quality of the teams involved and the home ground advantages. One other, the Geelong v Adelaide game, may show slight value for a Crows bet, but only under $2.20 and only with select bookies.

If we take the model predictions as a fair and accurate representation of what we expect to happen, it’s not until Sunday that we find that we find a couple of games that might be worthwhile having a flutter on. There are some innate difficulties in forming accurate ratings for the worst ranked teams in the competition. Using an Elo-based model like the FFSS predictions use, we lower a team’s rating after every loss and raise it after every win. But if a team is already the worst in the comp and is expected to lose every week as it is, is it fair to lower it’s rating even further after fulfilling that expectation?

FFSS has some methods to help combat this spiraling out of control. On top of the usual Elo method of the points change being proportional to pre-match expectation, FFSS also looks at the final game margin as well as each team’s ExpScore, in order to see the underlying shot production a team is capable of both creating and preventing.

It’s this that helps us differentiate between the Bombers and the Lions, two “one-win” teams. The FFSS ratings difference probably reflects quite well the way most people have seen these two sides this year. Essendon have been bad, but competitive. Brisbane have just been bad.

Square these two off against each other in Melbourne, and the FFSS model thinks the Bomber’s are a 70% chance of winning. Some bookies are offering $1.52 which equates to an implied win probability of 66%. For a bold backer, who is unfazed by the fact the Bombers have only won the one this year, there may be value in a bet on this.

This is a very important game for both sides. Port are looking to keep their finals chances alive, while GWS are looking to challenge the top-4. It seems the market has decided that this means the better team will rise to the occasion. Some bookies are offering bets on Port with an implied probability of just 42%.

The model is far more bullish about the Power at home, giving them a 56% chance of victory.