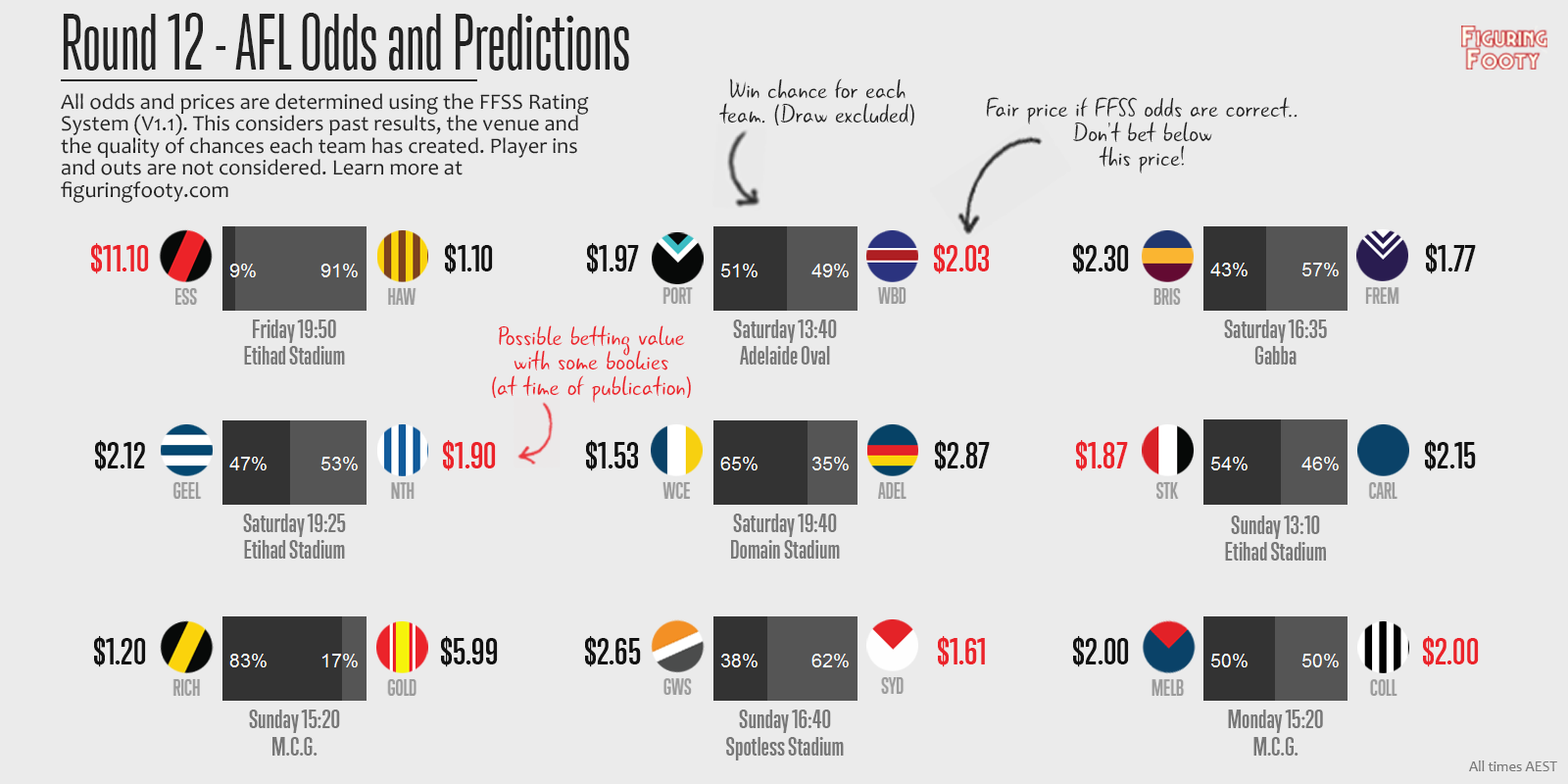 Round 12 Tips and Predictions Bulldogs, North and Swans to upset the favourites

After a delayed start to the week, the weekend has caught me off-guard and I only just have time to rush out a quick post before the Friday arvo tips are due in. Apologies for those who have been waiting.

The delay comes in part from the time spent this week toying around with improvements to the FFSS rating system as well as researching a new rating system that I hope will have even better match prediction abilities. This will probably still be a fair way off, but I hope to get it out in the public eye before the end of the season. As always, if you want to stay updated, it’s best to either subscribe to Figuring Footy (using the form in the sidebar) or follow me on Twitter.

Now, straight to the games, which incidentally appear to be potentially “round of the year” worthy. There has been a lot of hype about Port Adelaide this week. They look the only genuine threat to disrupt the top-8. The have also been charging up the FFSS ratings and are now considered as only a rung below the premiership challengers in terms of quality, but a mile better than the other chasers.

This of course makes them a dangerous prospect at home. With the Bulldogs losing yet another player to injury (Toby Mclean) in a tiring game last week, you can see why the Power go into this one favourites.

However, I think the pendulum has swung a bit too far and punters are getting caught up in this, largely fictitious, idea of “momentum”. The model has Bulldogs as a 49% chance whereas some bookies have them as low as 44%. This spells reasonable value.

Were this game to be played at Kardinia Park, Geelong would go in fairly big favourites. But Etihad Stadium is the big leveler. The Kangaroos have played there 17 times in the last 2 years compared to the Cats 5. Experience and roughly even crowd tip the model prediction in this one slightly towards the higher rated team in North.

The 47% implied win chance of North compared to model’s 53% suggests another small bet.

Carlton is another team that has everyone screaming “momentum”. The bookie prices on this one suggest the Saints only win around 44% of the time, where the FFSS model has them at 54%.

The discrepancy here is a little more understandable. St Kilda will be without 4 players that played last week including captain Nick Riewoldt and former number 1 pick Paddy McCartin. For those new to FiguringFooty, the FFSS model does not attempt to account for player ins-and-outs in the short term, so the 54% here does not consider these injuries.

I’ll leave it to you to decide whether those loses fully justify the change in odds.

If it weren’t for 3 other great games before it, this would easily be considered game of the round. Most bookies have this one at a coin-flip. I believe this is based mainly on GWS’s great recent record at Spotless Stadium and the undoubted “potential” they show.

However, I expect the ground to be packed out with Sydney fans and the HGA to be less pronounced then it usually is. I also rate Sydney as the best team in the competition, so to say GWS will need to show some more of that “potential” is an understatement.

The model has the Swans as 62% favourites compared the 50% offered by some bookies. This is a clear value bet for me.