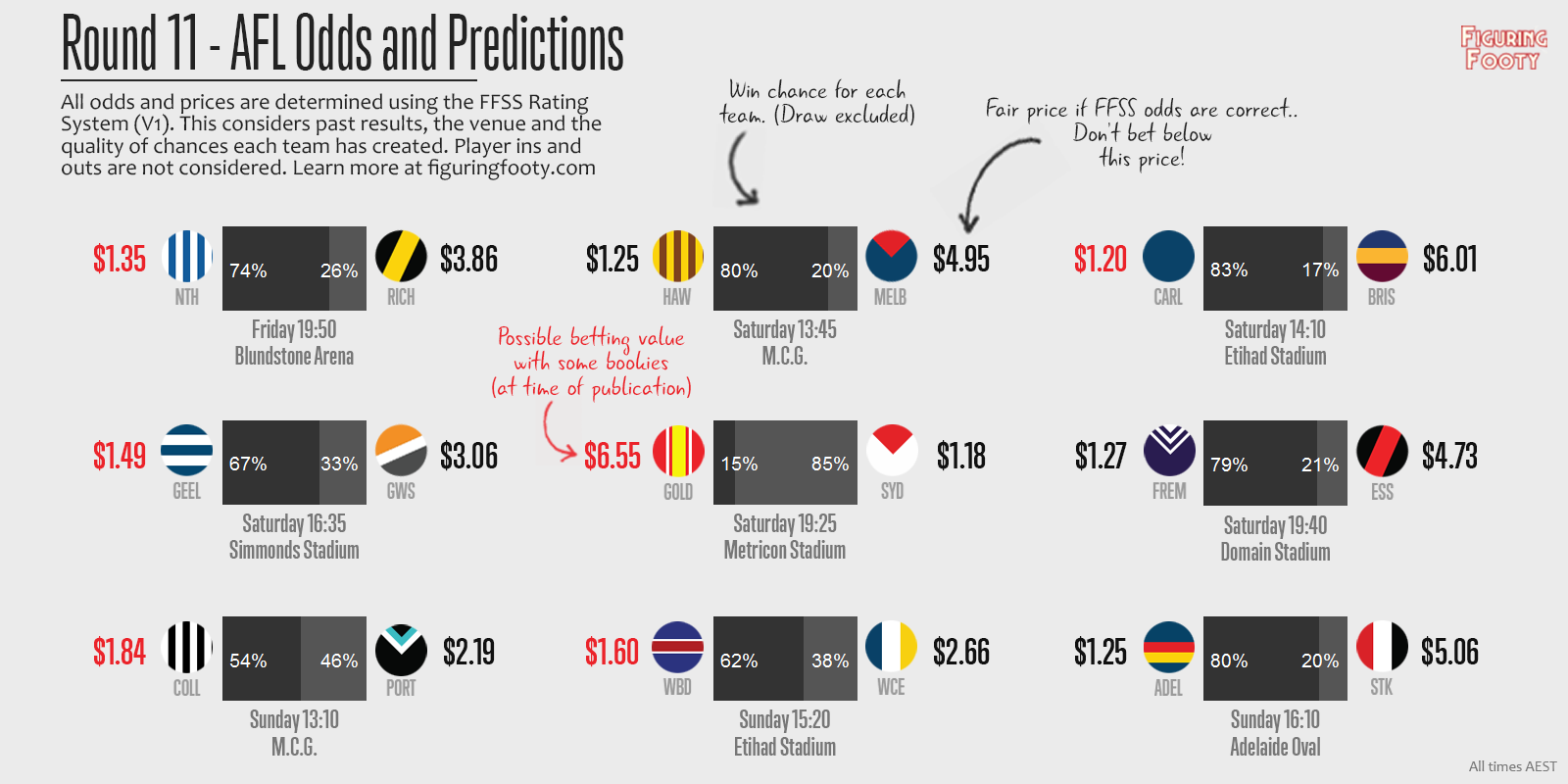 Looks to be an interesting round of footy this week with 3 or 4 close games and some real potential for upsets in the others.

I’ll jump straight into the FFSS system predictions this week without any further ado.

The graphic opposite shows the FFSS team ratings at the start of the round. These are slightly different from the ratings posted on Monday as I have made a few small tweaks to the FFSS algorithm during the week. These, along with a concession for Home Ground Advantage are the direct inputs for the final probability estimates.

Home Ground Advantage is a curious thing. Why exactly teams play better at home is up for debate. Is it ground familiarity? No travel fatigue? Playing in front of your own fans? Regardless of what you pin it down to, it seems to exist in just about every sport in the world.

There has been a lot of talk about whether clubs should be so willing to “sell” their Home Ground Advantage by playing away. This is mainly on the back of Melbourne once again losing their “home” game in Alice Springs to Port Adelaide.

North Melbourne playing in Tasmania is a little bit different. They play their often enough to both develop a sense of familiarity with the ground and also foster some sort of “home” fanbase. The FFSS system2 calculates North’s HGA in this game to be around 14 FFSS pts. This equates to roughly about 1 extra win above what would be expected on a completely neutral ground for every 50 games played. A tiny advantage, no doubt, but larger than what they would have held if they were instead hosting Richmond at Etihad Stadium.

Factoring in this, and each club’s performances in the season-to-date, we give North about a 74% chance of winning on Friday night. Current bookie odds give the Roos about a 67% implied chance of winning. Because of this discrepancy, a bet on North may be good value.

Who would have thought we would be in a scenario where Carlton are going into to a game 83% favourites?

Don’t let Blue’s fans fool you, Carlton are still a poor team. According to the ratings there are 13 teams better than them. This prediction is more a reflection of where Brisbane are at and also how hard the trip to Melbourne historically is. If this game were at the Gabba, we’d probably only favour Carlton at about 55-56%.

Bookie odds put the Blues at about 75% chances so if we are to back the model, a bet here would once again be good value. But if you do make the plunge, remember, you are back Carlton at short odds. Be wary.

Geelong have been rubbish over the last two weeks. But even in their losses, their consistently good scoring shot production leads us to believe that they are a good team and their issues in front of the big sticks will disappear as their accuracy reverts to the mean.

The HGA at Kardinia Park is massive against a team that many question the mental maturity of playing away from home.

Bookies currently have Geelong at an implied win chance of 64% so there may also be value in this one for the favourites.

The FFSS model has the Pies as favourites while the bookies have them as underdogs. The reason for this? Injuries. The FFSS model unashamedly ignores any injuries from game to game instead rating each team on the long-term form they exhibit.

I’ll leave it to you to decide whether Collingwood’s recent injuries justify them moving from 54% chances of winning to 45%.

Bulldogs are another team that has been plagued by injuries, however the model has had a longer time to adjust and update it’s rating compared to Collingwood.

The Dogs go into this game as FFSS favourites solely on the back of a big Home Ground Advantage. The model rates West Coast as the better team.

The implied probability of the Dog’s winning by the prices currently offered by bookies is 54%. While I think a bet on the Bulldogs may offer good value, they have looked tired to me over recent weeks. I also think West Coast will be very competitive, and no doubt out to disprove their title of “flat track bullies”. I’m going to hold off, but I could definitely see a bet on the Bulldogs here being worthwhile.