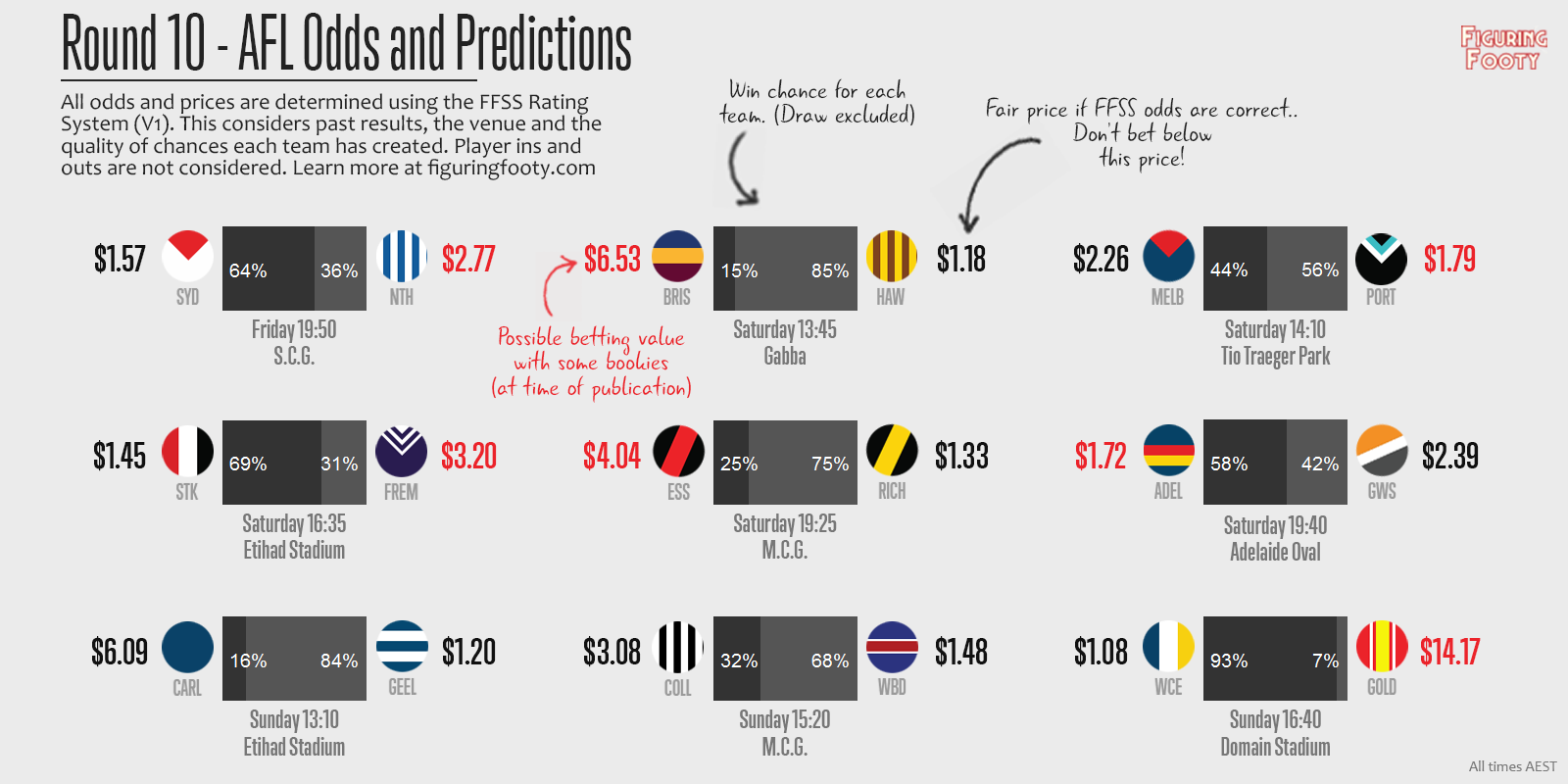 There are probably two or three games of real interest this week. The results of which will no doubt have a fair effect on the FFSS ratings of the teams involved and will help us firm up our ideas about who is and who isn’t a real contender this year.

The first of these tasty encounters is also the first game of the round, Sydney hosting the unbeaten North Melbourne on Friday night. The updated ratings posted on Monday have the Swans currently rated as the best team in the comp following the previous holders of the title, Geelong, faltering against the Pies.

Not far behind these two sit North. Despite winning 9 straight, the Kangas have yet to truly convince the algorithm that they deserve to be sitting above all others like the competition ladder currently has them. They have won games, but often by not much and often against weaker teams. This explains their slightly weaker rating. However, win here, against a higher rated team away from home, and we will find it hard to make any argument that North are not No. 1.

The other game of immediate top-8 significance is Adelaide-GWS on Saturday night. The Giants have flown up the ratings this year and are now considered (by the model and by most) as one of the best few teams in the competition. Adelaide will go into this game the lower rated side, but favourites due to home ground advantage.

A loss here and the Crows will slide away from the top sides in FFSS ratings terms and also most likely slip out of the 8 on the competition ladder. A win, and they have to once again be considered challengers. If you are to trust the model, a bet on North here represents alright value.

If this game were held in Melbourne, we’d expect the Dees to win. However, both teams are travelling to NT to play a at a ground they have each played at twice, so any sort of HGA to Melbourne essentially evaporates.

The model rates Port Adelaide a little higher then Melbourne and hence tips them to win. The difference in these ratings may be partly due to a slight inefficiency in the FFSS model, I am currently looking into this and may update ratings at a later stage. Until then I am going to hold out on any betting.

I have written before about the difficulties FFSS has in rating Freo. It only uses results and performances from past games to formulate it’s probabilities and cannot account for any in-club decision by the Freo coaching staff to write off this year and no longer play for results. Great care must therefor be taken if betting on a Fremantle game.

Still, I have a feeling that the 27% implied win probability for Freo is a bit low, and a small bet could be warranted.

I feel this game may come down to a mismatch of styles, a thing that the FFSS model as of yet does not incorporate into it’s probability assessments.

Adelaide look depleted in the midfield and have been unable to compete with both Geelong and the Western Bulldogs out of the centre in the last month. The Giants have an arguably better midfield than either of these two and will likely win too much ball for the killer Adelaide forward line to see enough of it to kick a winning score.

If you want to trust the model, a bet at $2 on the Crows looks pretty good. For me, I feel like this is too much of a risk.