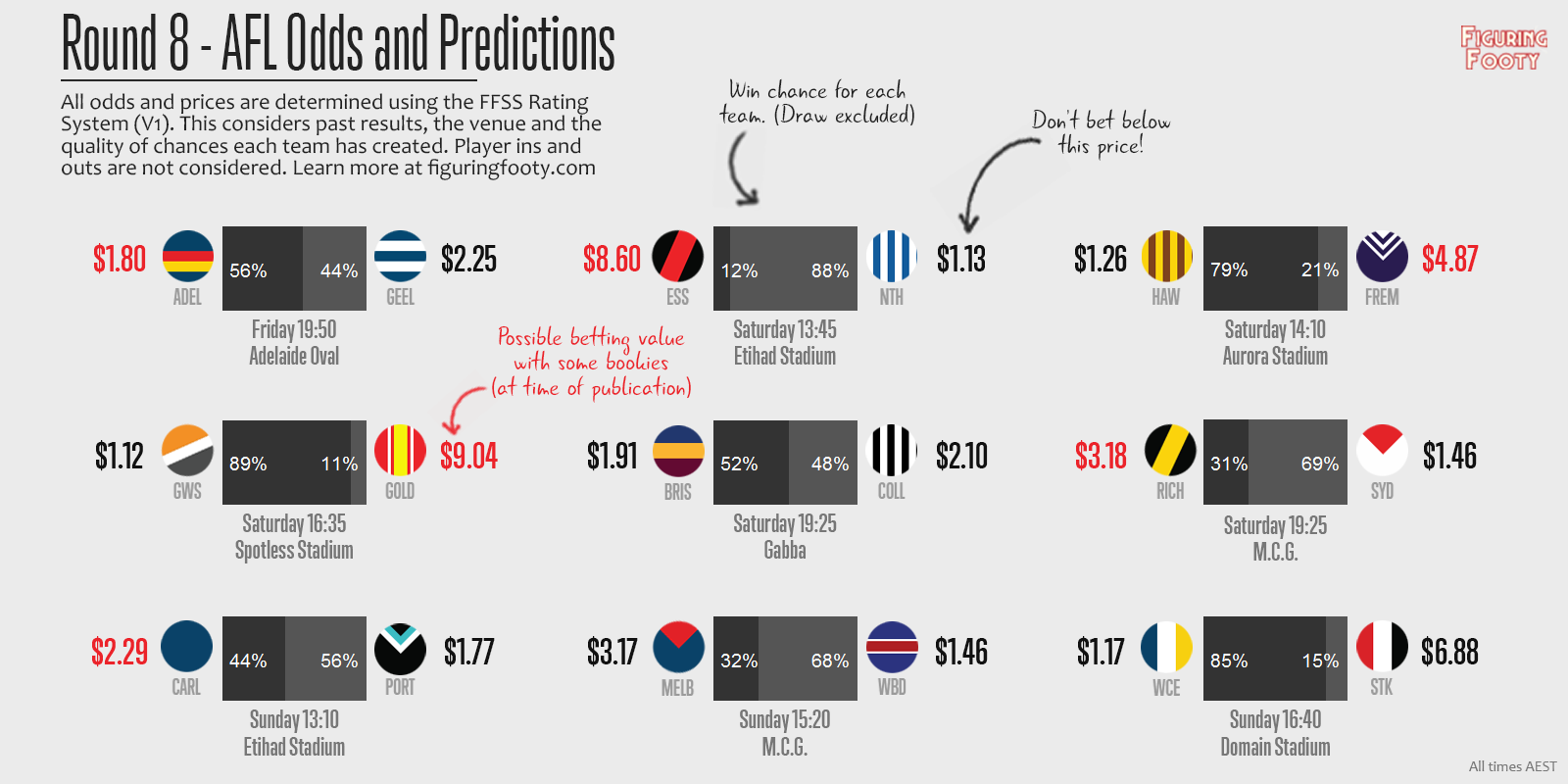 Outside of a cracker on Friday night, Round 8 doesn’t offer all that much in the way of entertaining match-ups for the neutral fan. No other top-8 sides play each other this round, and Melbourne v Bulldogs on Sunday stands as the only other game between (potential) finals challengers.

That being said, in a week with 6-7 one-sided games we’re more likely than not to get a genuine upset. So there will no doubt be a bit of excitement to be had.

I wrote last week about the difficulty the Figuring Footy Scoring Shots (FFSS) system has predicting results in games featuring teams affected by injury or suspension. This is again important to bear in mind this week1 if you are looking at the FFSS predictions to help you do your tips or have a punt.

I will walk through a another scenario where the FFSS rating system may give slightly off results this week. It is important to know what the model is capable of and what it’s limitations are. Computer tipping models are very interesting tools that can provide a level of insight that the average fan (and even the average media pundit) can often miss. However, this does not make them infallible. Their outputs must be interpreted by somebody who understands things that the model does not.

My usual qualifiers about using model predictions for betting apply.2 Rather then write previews for every match of the week, I will instead comment on interesting discrepancies between bookie odds and FFSS odds, why these may exist, and whether there is any value in betting at the available price. As was the case last week, this week there isn’t that much that stands out as great value.

Adelaide look like they may involved in the game of the round for what must be the 5th or 6th time this year. Whether this continuous, high-intensity footy will take it’s toll on the Crows is yet to be seen, but some signs were definitely there in their poor tackling and midfield showing against the Bulldogs last week.

The model does not factor in the possible physical tiredness3 into it’s prediction, but certainly does consider last weeks results as a sign of what to expect here.

Bit-man David Mckay is out for the Crows with injury but this may be a blessing in disguise as they can replace him in the midfeild with fresh legs. Geelong have been flying high and are getting a good run with not many injuries to key players. However a trip to Adelaide Oval is a tough prospect I don’t agree with the bookies that the Cats go in favourites. A small-to-medium sized bet on the Crows at $1.98 seems like alright value to me.4

Most of the long-shots show value this week5. But the biggest difference between bookie prices and FFSS implied prices is certainly on Fremantle.

The reason for this difference in public opinion and FFSS opinion is two-fold. Firstly, as spoken about in detail last week, FFSS has yet to fully come to terms with Freo’s injuries.

Secondly, the Dockers have been open about their decision to write off this year and use it for experience rather than a potential finals tilt. From 0-7 this looks like a pretty good idea.

The FFSS model does not deal well with a team suddenly deciding that winning is not that important. The model is based off the fundamental assumption that teams try to win. In the last 5 weeks of the season we weaken this assumption for teams that can no longer make the finals and have hence given up. But for that to happen this early in the season throws FFSS a curveball it is not entirely sure how to handle.

If Freo do stop caring about results, as the rounds go on their rating will drop and our predictions will improve.

But right now there is a bit of an unknown cloud above Fremantle, which is certainly not a good thing when it comes to betting.

With the return of Cotchin and Rance this can’t be attributed to the injury/suspension overvaluing quirk as it could have been last week.

Sydney are certainly favourites in this one, but a cheeky little bet on a desperate Richmond at $4.35 at home could maybe represent value. But it’s too much of a risk for me.

The model finds possible value in Carlton here at $2.85 with the FFSS predictions being leveled somewhat by the Home Ground Advantage of the ‘G against an interstate team.

This one is a bet for those with faith. I however don’t have much faith in Carlton. Last week they looked alright against a very poor Collingwood, but in their only 2 other wins of the season they have looked terrible against teams that have somehow managed to play even more terrible on the day in Fremantle and Essendon.

We will definitely find out if Carlton are more than cellar dwellers after playing a (slightly) above average team in Port, but I wouldn’t want to have money riding on finding that out.

Bookie prices can be seen as a general “public consensus” about what the true probabilities of a team winning a match are. When the model differs greatly from the public view it is good to know why. Is it seeing something else that the public are not valuing? Or, is it missing something entirely that others are taking into account? If it’s the latter, then there is clear improvement that can be made, if the former, then I guess we’re on to a winner. All betting amounts will be discussed as unit bets assuming you have 100 units to play with as your full bankroll. For example if you have $1000 that you’re willing to lose over the year if worst comes to worst, then 1 unit is $10. A higher unit bet shows more confidence in the models assessment and the value to be made.