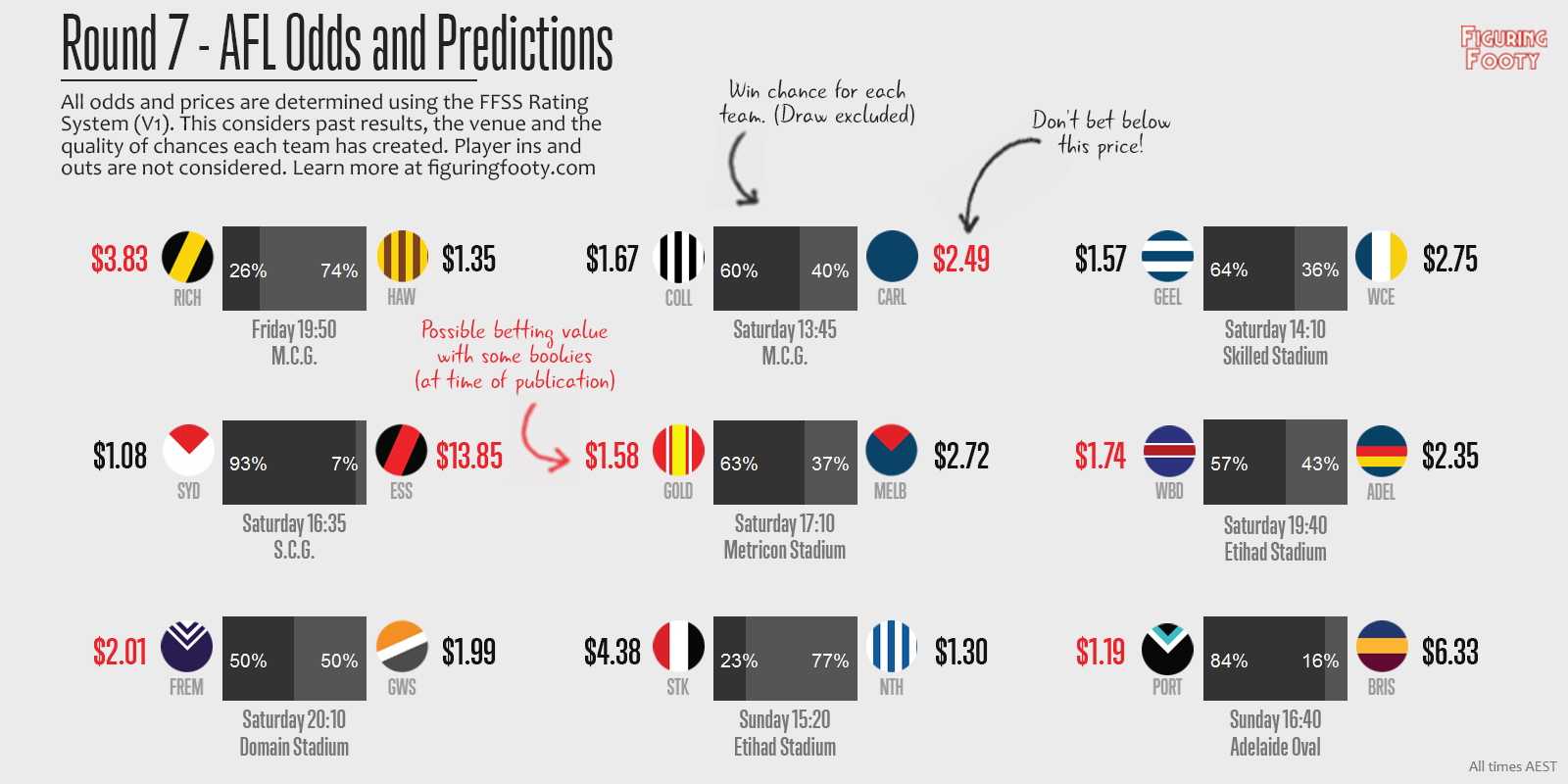 When I first introduced the Figuring Footy predictive model, FFSS it came with a significant caveat, injuries are not directly considered. Ratings and predictions are determined purely on a team’s past performances, taking into account opposition-weighted final scores, underlying ability to create quality shots and home-ground advantage among other things. It considers the “team” ability and strength rather than a sum of individual player ability and strength.

For a game with 36 blokes running around on the field at any one time, the individual contribution of one player is perhaps less than in any other sport. Even when you remove a gun player from a side, unexpected things can happen and the team can actually improve. Just look at Geelong sans-Ablett, Hawthorn sans-Buddy and even Adelaide sans-Danger. If we simply looked at team being the sum of all players, we could never have predicted that removing the best player can make a team play better footy.

That’s not to say that FFSS is a static system when it comes to player movements. FFSS ratings are very fluid and updated after each week to reflect1 how a team performed in that match. If a key player has been removed and a team has noticeably changed because of it, the FFSS ratings will change very quickly to reflect this.

Although this is a great feature of the system in the long term, it unfortunately leaves us with nothing but educated guesses about how a team that has just last week lost a key player (or two) to injury/suspension will fare this week. As you look through the predictions this week2 you will notice a lot of games where FFSS is confident that she has found value where a more (player-wise) tipper would probably turn their nose up.

Bookie prices can be seen as a general “public consensus” about what the true probabilities of a team winning a match are. When the model differs greatly from the public view it is good to know why. Is it seeing something else that the public are not valuing? Or, is it missing something entirely that others are taking into account? If it’s the latter, then there is clear improvement that can be made, if the former, then I guess we’re on to a winner. All betting amounts will be discussed as unit bets assuming you have 100 units to play with as your full bankroll. For example if you have $1000 that you’re willing to lose over the year if worst comes to worst, then 1 unit is $10. A higher unit bet shows more confidence in the models assessment and the value to be made. Rather then write previews for every match of the week, I will instead comment on interesting discrepancies between bookie odds and FFSS odds, why these may exist, and whether there is any value in betting at the available price. This week, as you will see, there isn’t much.

Richmond continue to be an intriguing case. A team in absolute and total disarray. Of the teams to slide this year, Freo look like the clear worst sitting at 0-6 and dead-last on the ladder. However, in actually watching both teams play Richmond look far worse. The game simply seems to have passed them by and they are caught playing a stale brand of footy with players that would unlikely get a run at many other clubs.

The public have definitely been able to pick this up faster than FFSS has. She has seen value in the bookie prices offered for the Tigers every week for the past 6. This week you could get $7 for a Tiges win. Tantalising. But after what I just wrote about them last paragraph, I’m gonna sit this week out.

FFSS sees Collingwood as a pretty rubbish side. However, as most would agree with, she sees Carlton as even worse. The Blues had a bit of kick in their ratings over the last fortnight getting over Freo and Essendon in two of the worst games of football ever played. The fact that the Pies still see themselves as top-8 shots, and therefor this game a must-win, and that the Blues probably don’t want to win too many more due to “rebuilding” reasons, there is just too much conflation to back in the FFSS probability estimate.

Essendon will lose. They are still a fair way from their “true” rating I feel.

Melbourne are very hard to pick. They genuinely seem to be unable to handle the “favourites” tag. Regardless, I consider them a better team than the injury depleted Suns. HGA should make this one tight, but am unable to back in the 63% Gold Coast win due mainly to injuries and suspensions.

The Dogs are another injury affected team. The Crows too have lost an important player in HB flanker Rory Laird but may see another couple return from injury. If both teams were at full strength I think I would agree with FFSS, having the Dogs 57% chances of winning. However, as I said before, considering injuries I would just be guessing, not something I really want to do. Yet another game sat out.

Once again, injuries injuries injuries. Hard to get a read on Freo right now. They look competitive but still sit winless. I don’t expect this to change against a GWS side that looks scarier every day. 50/50 even at Subi seems a bit kind considering the players that will be out there. No bet.

Ugh. More injuries. $1.33 could be good value on Port. But who really knows?