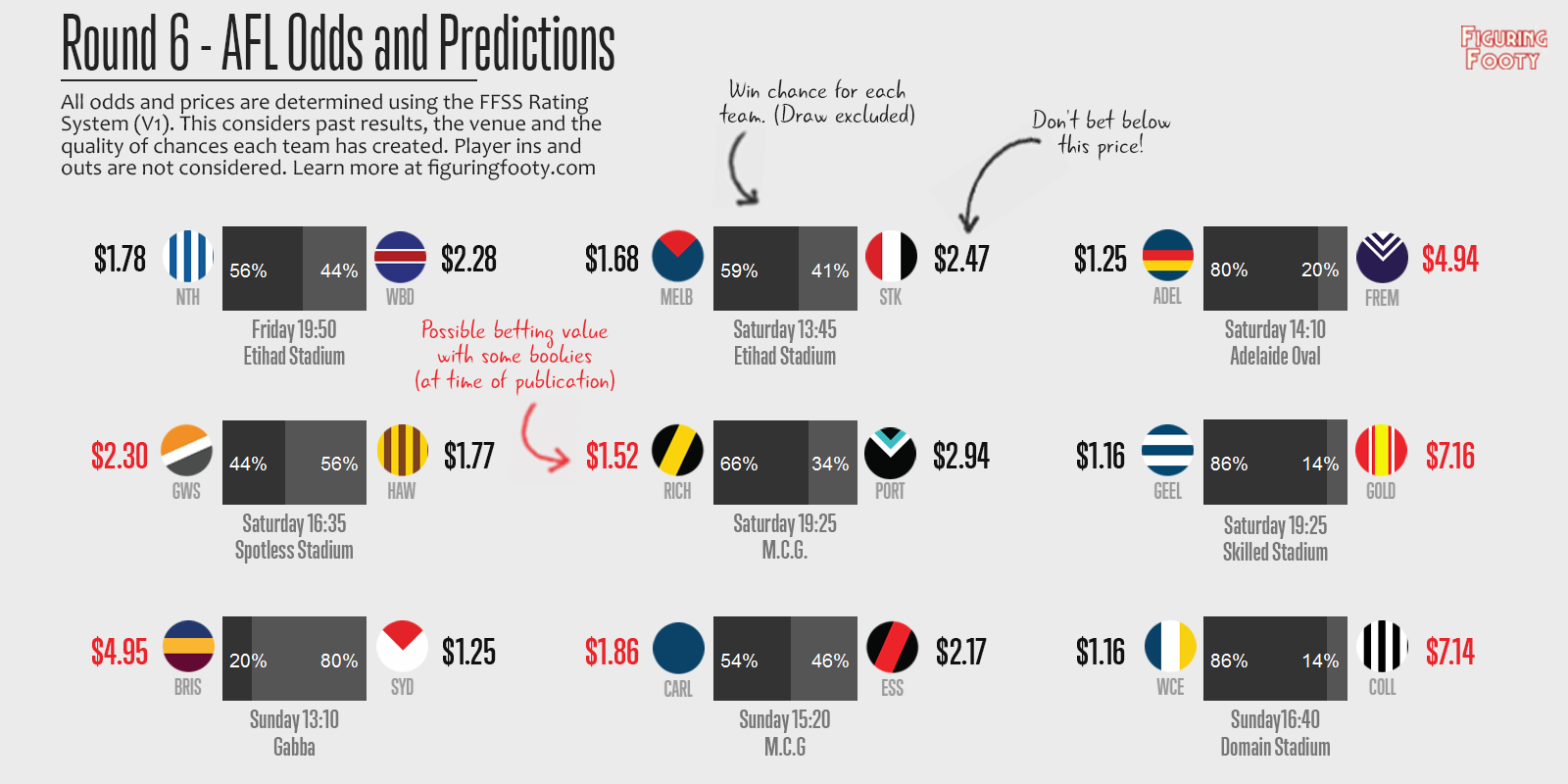 There are probably only 4 or  5 games of genuine interest this week, assuming that we don’t have any major upsets. The pick of the bunch is certainly Friday night between North and the Western Bulldogs. It’s 1st vs 2nd1 on the ladder and a convincing win here from either side will really stamp a mark on the comp. While that is all well and good, perhaps of even more importance to the Bulldogs right now is ensuring their continuing run at that (possibly) injury causing stadium, Etihad doesn’t deplete their team any further.

The Figuring Footy Scoring Shots (FFSS) system also predicts a pretty tight contest on Saturday between GWS and Hawthorn at Spotless stadium. Win here and the Giants will get a significant ratings boost and will have to be considered legitimate threats.

Three other games will give us a much better idea of where some of the middling-to-lower teams are at this season. Melbourne v St Kilda, Richmond v Port and Carlton v Essendon all match up pretty similarly strength sides and their results will be interesting.

Bookie prices can be seen as a general “public consensus” about what the true probabilities of a team winning a match are. When the model differs greatly from the public view it is good to know why. Is it seeing something else that the public are not valuing? Or, is it missing something entirely that others are taking into account? If it’s the latter, then there is clear improvement that can be made, if the former, then I guess we’re on to a winner. Some bookies are offering $10 on Fremantle this week. This seems like good outsider value to FFSS. Of course, to anybody that has actually watched any footy this season, putting money on Freo at Adelaide Oval against a high-flying fast-playing Crows would be worthy of hospitalisation.

This is a great example of the FFSS model’s shortcomings. Firstly, as a “player-blind” rating system, she has no idea whatsoever that Fyfe is out and still has not fully adjusted her team ratings to entirely account for the loss of other key players2.

FFSS also fails to offer us much insight into the style of play of play for each side. Adelaide are playing beautiful football right now, tearing sides apart with their high intensity and punishing them on the rebound. Freo on the other hand look like they’re playing a stale, old brand of “found out” football. From the look of their games so far, I struggle to see how they can match up to Adelaide structurally at all.

This game is pleasant reminder that analysis must still be done by an analyst and we are still a long way off the stage where we can let a computer make all it’s own decisions while we sit back and watch. A model like FFSS is an aid, not a black/white predictor.

This game seems to be the only one this week that FFSS flags up as presenting significant value that is not either involving a rank outsider or the still unknown quantity that is Essendon.

Richmond have been very disappointing this season, but so have Port. I’m wary as to how accurate the ratings are for both of these sides as the recalculation that has occurred over the last few weeks may well have overcompensated. This match should give us a much better idea of the true ratings.

Regardless, I think at $1.72 Richmond hold value and a tentative bet on the Tigers will be our only foray into the betting market this week.