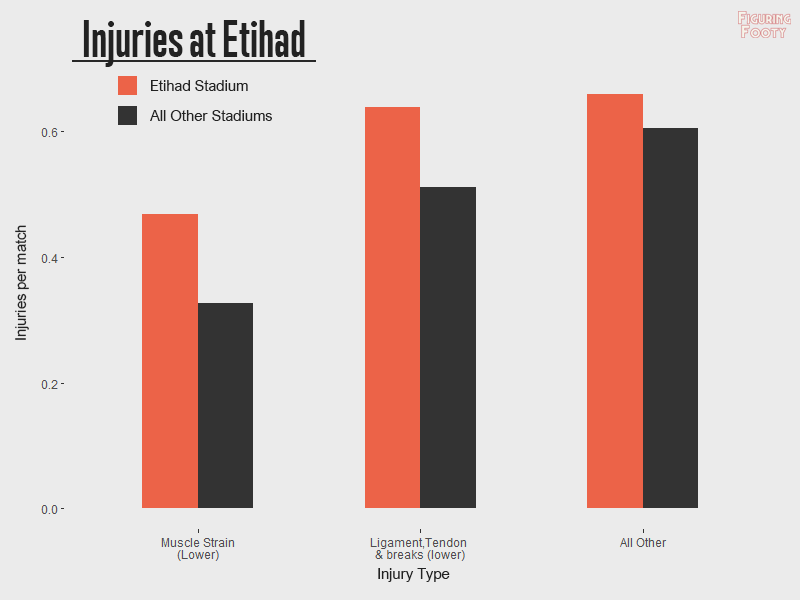 Are injuries more likely at Etihad? Recorded injuries by ground

Posted in Trends and Historic Analysis

The discussion on whether the surface at Etihad Stadium is unsafe is sure to be in the media again this week after Bulldog Matt Suckling went about as close as possible to snapping his ACL on Saturday night.

Suckling has gone down to the rooms for treatment after this incident. #AFLDogsLions https://t.co/lYgJwpRZtZ

Luckily he dodged a bullet and hasn’t suffered anything serious, although it still remains to be seen whether he will be fit to face North this Friday night. This is nothing new for the Western Bulldogs this year, he’s just another one on their rapidly growing list of injury concerns.

Just 5 rounds into their opening run of 7 games straight at Etihad Stadium, the Bulldogs have already lost their captain Bob Murphy to a serious knee injury, midfielder Jason Johannisen to a hamstring as well as a few other notable tweaks including an ankle scare to Suckling himself just last week.

The question on everybody’s lips; “Is this Etihad Stadium’s fault?”.

Docklands has long been maligned as a poor playing surface. For at least ten years now, players, coaches and fans have all been speculating about an increased risk of injury when playing at Etihad Stadium. Let’s look at some data and see if this holds up. Etihad has witnessed 166 injuries of varying severity2 over the two years. Of course, this is not really a fair comparison. Between them, Etihad and the MCG host the majority of AFL games each week. We need to instead look at the amount of injuries that are recorded per-game at each stadium. Let’s also restrict our data to only include stadiums that have hosted at least 30 games over the 14′-15′ period. On average there were 1.77 recorded injuries per game at Etihad. This just edges out the 1.74 per game at the MCG, and is much higher than the 1.35 and 1.2 at Domain Stadium and Adelaide Oval respectively.

But raw injury counts don’t tell the whole story. Those injury figures above include gouged eyes, broken ribs and a whole heap of concussions. These aren’t really the sort of injuries people refer to when they claim the Etihad surface is bad for players.

To get a better idea of which injuries are happening at Etihad, I have split all injury counts into three different groups:

Comparing the instances per-game of these three types of injury at Etihad, to the average over all other stadiums: Lower muscle strains (such as hamstrings and calves) have occurred at Etihad at the rate of about 0.47 a game compared to 0.33 around the other grounds. This means we have an extra muscle strain injury at Etihad then we would at other stadiums roughly once in every six games. The rates for ligament/tendon/breaks are 0.64 at Etihad and 0.51 elsewhere. This equates to an extra ligament-type injury every eight games. For a ground that hosts multiple games every weekend, this is a lot of extra injuries.4

One of many important things to bear in mind5, is that this does not take into account the severity of each injury. We have seen a couple of possible season-ending injuries at Etihad so far this year, but these certainly happen at other grounds too. I have no way (other than calling on my own memory) to say whether more serious injuries occur at Etihad, but I’d say it is a definite possibility.

It remains to be seen whether the AFL will ever try and fix the surface at Etihad, or even publicly recognise that it is a problem. I fear that we will need to see a few more high-profile injuries before that ever happens. For the safety and well-being of all players, lets hope this isn’t the case.

I wrote a follow-up to this article, with some updated data after Round 8.