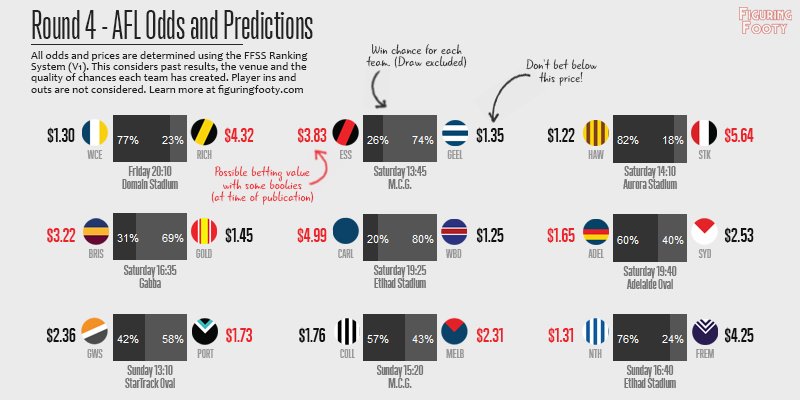 Another 7 out of 9 games went to the home team last week. This brings the total home team wins for the year to 21 out of 27 games. You would be there abouts in most tipping competitions if you had just picked the home team for every match and just left it at that. 1

Do we expect that sort of home team dominance to continue this week? Well, not really. With Essendon, Brisbane and Carlton all playing at home against reasonable opponents on Saturday, I would be very surprised if we had another big round for the home teams.

This round really breaks down into three distinct types of matches. The one-sided (ESS v GEEL, HAW v STK, BRIS v GCS, CAR v WBD), the genuinely tight (ADE v SYD, GWS v PORT, COLL v MELB) and the buggered if I know (WCE v RICH, NTH v FREM). For the first time this season, FFSS thinks she has spotted value in the betting markets for every game. I on the other hand, am not so sure.

I have translated calculated probabilities into inferred match odds and compared these to the current prices offered by some of the bigger bookmakers around the country, highlighting any major discrepancies. The reason I have done this is not to recommend or even advocate having a bet on any particular team (although I will certainly talk about “good bets” and “value”). But it is rather used as a way to explore the strengths and weaknesses of the model in greater detail.

The graphic above highlights all of FFSS’s probability estimates for the week. The prices next to each team are

the minimum suggested price to take if you were to bet on them to win the match, assuming that FFSS predictions are perfect. In reality this is, of course, very likely not so.

Every week FFSS thinks there is value in an Essendon bet and every week I have to step in and return order, reminding everyone that she doesn’t really know about the WADA bans yet. “Give it a few weeks for FFSS to update her ratings” I keep saying. Well it has been a few weeks now, the Bombers still aren’t considered the worst team in the comp and some bookies are offering a massive $13 on Essendon.

Make no mistake about it. I think Geelong will win this game and win it comfortably. But $13 will coax me into a tiny tiny little flutter on (a still unknown) Essendon for the first time this year.

FFSS thinks the Saints have about a 18% chance this week. The bookies think about 12.5%. Could be some very small outsider value here again.

This is the first interesting prediction of the week (and not just possible slim outsider value like the first 5 matches). The bookies have the Swans going in favourites, but FFSS is 60% confident in her assessment that Adelaide will get the job done at home.

There are not too many personnel changes for this match, outside of running forward Tom Lynch coming back into the Crows side after the birth of his daughter last weekend. So that’s not a reason for the discrepancy.

There may still be some lingering affect of Adelaide’s rating being based of Dangerfield included in their side last year and Sydney’s being a bit depleted due to the lack of Buddy late last year. However, the majority of that should have smoothed out by now and it won’t stop me from backing FFSS’ assessment and getting on the Crows at 2.02.

There is a lot of hype surrounding GWS given they have lost 2 out of their 3 games (including Round 1 to Melbourne). In contrast, people have gone right off Port despite them only having lost 1 game (the Showdown against Adelaide) so far in 2016.

Both FFSS and I understand that the Giants have beaten quite a good team in Geelong, and Port have really yet to claim a major scalp. And I (but not FFSS) understand that Port have been having some serious injury troubles.

However, without considering any player changes FFSS considers the Power a 58% chance of winning, while some bookies only give them a roughly 46% chance. This being considered, I think there is definitely some value in a bet on Port.

I’ve heard a few times this week that Freo are “due for a win” and hence might be a chance this week. I’m not exactly sure how I feel about this sentiment. It is true that in the scope of their respective seasons, this game is much more important for Freo than it is for North, but whether this means that they are more likely to win then they would have been if the roles were reversed I am not convinced.

After studying probability for a while, you begin to realise that a lot of what you thought was true happens to just be a quirk of luck (i.e. a probability distribution).

There was a bit of debate on Twitter this week regarding whether “momentum” was a real concept or just a narrative written after the fact.2 Can you predict momentum before it happens? If a team has been winning (and we somehow know the exact “true rating” of that team) are they more likely to win the next game? If you have flipped heads 3 times in a row, are you more likely to flip heads next time? Is it fair to compare these two events?

The “due for a win” strikes me as the exact opposite of momentum. A team has been playing badly therefore it is now time for them to play well? Yet the two are often used by the very same pundits. I’m skeptical, but not decided on whether there is value in using this sort of analysis. More research needs to be done.

As for the game, Sandilands is out, Goldstein will dominate, I think there is definite value in a $1.42 bet on North at an implied win probability of roughly 70%.