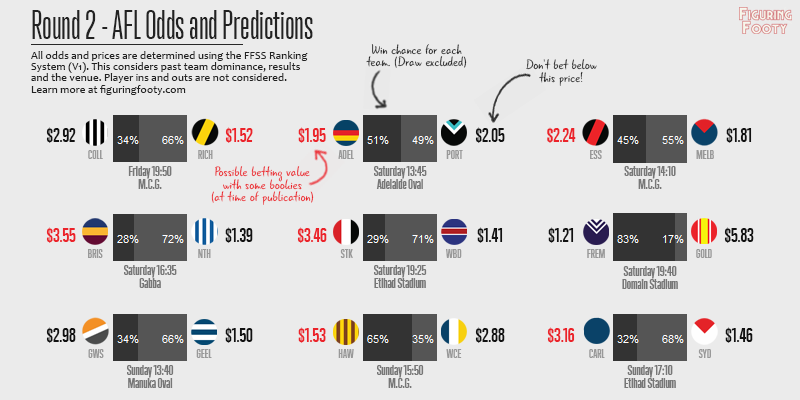 2016 Round 2 – Tips and Predictions Home teams travel away

Posted in Ratings, Tipping, and Uncategorized

Week 1 proved to be a very successful round of tipping for the FFSS (Figuring Footy Scoring Shots) predictor. 8 out of 9 games were tipped correctly, and if you followed through on my recommended bets you would have netted yourself a tidy little profit of +13.02 Units (which would be about $130 if you started with a total bankroll of $1000). However, I also wrote this week about grounding our expectations in reality, and why last week’s results may have been a bit lucky.

This week poses us a fresh new challenge. As has been discussed a fair bit on Twitter, last round saw every home team get up. With the way the AFL draw is organised in the early rounds, this means that every single one of Round 1’s winners, goes into Round 2 as the away team. This means that each of them will face a handicapping by FFSS’s Home Ground Advantage calculator. HGA takes into account distance travelled by each team, ground experience by each team and the AFL designated home team (for games that are played at shared stadiums). This week, HGA varies between ~7 ratings points for Essendon at the G against Melbourne and ~110 ratings points for Freo at home to the Suns.1

After last round, the competition has well and truly divided into two halves. We have a group of 10 teams on ratings well above average and another group of the remaining 8 spread out on values well below average.

Hawthorn and West Coast share near identical ratings up the top of the competition. The winner of this week’s match between the two will almost certainly take the top spot at the end of the round. A similar reshuffling will occur between Adelaide and Port after Saturday’s Showdown.

At the other end of the ladder, Collingwood have slipped down to a low rating that would no doubt shock Pies fans. The truth is, their results and fundamentals behind those results have not been good for a while now. FFSS is blind to any personnel changes and simply sees them as a team that finished low last year and got thumped in round one this year.

Essendon also begin their inevitable slide down the ratings as FFSS begins to reevaluate the Bombers based on their 2016 output.

Bear in mind, that the majority of a team’s rating is still influenced by results from last year. Some teams have no doubt changed for better or worse over the off season. It will take a few weeks before we can have more faith in FFSS’s 2016 team ratings.

Having said that, how do our ratings translate into match probabilities this week?

Round 2 kicks off with a battle of the walking wounded. The Pies will be without Steele Sidebottom, Jamie Elliott, Travis Varcoe and now crucially Dane Swan. The Tigers meanwhile will play with Shane Edwards, Ivan Maric and Brett Deledio missing from the side that most of FFSS’s ratings are based on.

Not being a fan of Collingwood (as discussed above), FFSS sees real value in a Richmond bet at $1.67 and an implied win likelihood of 60%, despite their poor opening round performance against the Blues.

Bear in mind, FFSS is “player blind”, so does not factor in injuries and suspensions. Because of this she is perhaps not the best of predictors in this contest. Still, I think there is value for a conservative wager on Richmond here.

As noticed in the ratings plot earlier, both Adelaide and Port are rated very very similarly. The fact that this is a designated Crows “Home Game” and the increase in supporters that brings with it, tips the probability ever so slightly into Adelaide’s favour.

The bookies, however, disagree. I can see where they are coming from, Adelaide are still coping with the loss of Dangerfield and Port now have a big gun up front in the form of Charlie Dixon. The FFSS ratings haven’t yet adjusted to fully reflect this.

However, I still see considerable value to be had on Adelaide. But remain wary, Showdown’s are always tough to predict.

Ranked dead last, Brisbane will go into most games this year as the rank outsider. This one is no different.

However, scoring over 100 points in the west last week, with pretty good underlying shot quality helped the Lions save some face. FFSS flags up this match as one having very slim value, but the Lions at home should be just better then the 25% chance the bookie’s $4 gives them.

A similar predictive prospect to the Brisbane game. However, this time the teams have closer ratings but very litttle Home Ground Advantage.

The Bulldogs should win, but FFSS thinks the public have gone a little too Bulldog crazy and that has presented value in an outside bet on the Saints.

These two team exchanged a whole bunch of FFSS ratings points after a one-sided grand final last year. The fact that they are still so close is a testament to how good West Coast and their underlying shot figures have been.

FFSS disagrees with the bookies here, instead backing Hawthorn in with the aid of a healthy Home Ground Advantage.

Of course, FFSS doesn’t know that Hawthorn is without Hodge and without any forward line structure until they either Roughhead gets back or they find a big man to plug the gap and take his place.

We, however do know this. And because of these big unknowns I’m not going to bet on Hawthorn this week, but will still stick with them (just) for the tip.

Sydney demolished Collingwood at home last week, getting many in the media back on board their bid for another premiership. But FFSS still has relatively modest expectations for Sydney due primarily to their fizzle out late last year.

Of course most of that period was played without Lance Franklin.

Just how much is a fit and ready Buddy worth? I’m inclined to think, quite a bit.

Still, at $5.50 or an implied probability of 18%, FFSS sees Carlton as reasonably good value and we take our third modest (but speculative) bet on an outsider for the week.